An Upper East Side Forager Captures Summer in a Bottle

A glassful of flowers. 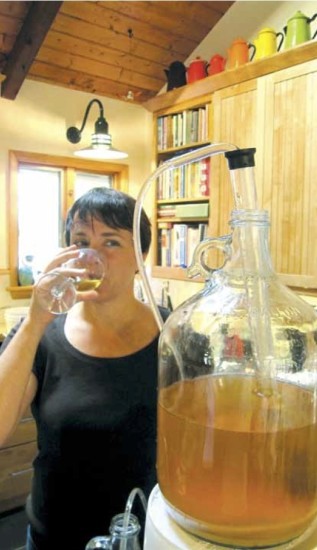 My lifetime’s longing to drink wine made from flowers was recently fulfilled. The preposterous wish to pluck the season’s most redolent blooms and preserve summer forever is ably, amply achieved in a cool, deep-yellow draft, poured from a bottle labeled Linden ’09 held by Ellen Zachos, on whose face is a slightly wicked smile of expectation. “Do you like it?” she asks.

I had been waiting for this moment ever since I read Laurie Lee’s Cider with Rosie for the first time, spellbound by “what seasons fermented in Granny Wallon’s kitchen, what summers were brought to the boil, with limp flower heads piled around the floor holding fast to their clotted juices.” Before that, my career aspiration, as a scent-intoxicated four-year-old, had been perfume maker, crusher of flowers, address: France.

This desire evolved into garden design, which led me to Ellen Zachos’s gardening and foraging blog, downanddirtygardening.com (also the title of one of her books). From there sprang an acquaintance colored and accompanied by what grows in the woods, what ripens high on a West 77th Street terrace and an eternal optimism that last night’s rain has brought out mushrooms in Central Park.

While Ellen and Granny Wallon share a bent for suspending a season in a bottle, Ellen is no hedgerow granny. She is a botanically tattooed, pixie cut, Harvard-educated, ex-Broadway singing, foraging-obsessed garden designer, author, Greek-American and self-described type-A New Yorker. During the week she tends clients’ gardens in Manhattan and the Bronx; on weekends she and her husband, Michael, and their two cats, Sisko and Seven, pack up their Prius and leave their Upper East Side studio to retire to their roomier house and new kitchen in the woods of Pennsylvania.

From the concrete jungle they carry the week’s seasonal haul on a bit of a reverse commute, all destined for fermenting: tender knotweed stems from the Ramble in spring; linden blossoms in early summer; June berries from terraces, Central Park and Brooklyn; an

Upper West Side terrace’s summer peaches and fall crabapples; an annual progression of elder flowers and berries, bartered by Brooklyn locavore Leda Meredith in exchange for the wines they’ll become; and their CSA overflow of carrot, beets, turnips, cabbage and, as the days grow short, squash, apples and pears. In the woods of Shohola, Pennsylvania, Ellen gathers wild blueberries by the bucketload in July and tart red silver berries when the weather snaps cold.

On a recent chilly afternoon Ellen is racking June berry, plum and peach wines started two seasons ago, transferring the clear wine from one heavy glass jug to another, leaving behind the sediment of dead yeast cells. She stoppers the jars’ necks with airlocks filled with bacteria-killing vodka and carries the heavy jugs back to the basement store cupboard, which is stuffed with seasons past: bottled beans, dried wild mushrooms, pickled cucumbers, tomato sauce and wine. A lot of wine. “I never buy wine anymore,” she says.

The golden liquid labeled Linden ’09 is a mouthful of flowers.  On the tongue, it is nothing like the clouds of blossoms that perfume city sidewalks in the warm days of late June. What slips down the throat is both deeper and lighter than the suspended air of a linden-blossom summer, more potent than the high note of the small green and yellow flowers that hang from the thickly leafed street trees on the longest days of the year, an immediacy of sweetness tempered by a Botrytis-like caution, as if, in acknowledging the height of the hot days, the wine warns that this, too, shall pass.

Straw-colored squash wine is astringent with a mellow center; deep purple elderberry has a tannic quality that begs for boeuf bourguignon; knotweed has a mineral essence and round finish.  Occasionally a wine turns skunky. A mouthful of cabbage wine is a shock, its cruciferous heart exposed. “But I can’t bear to throw anything away,” says Ellen. It’s undrinkable, but she has discovered that the skunk departs when the wine is used as a braising liquid for Greek lima beans, slow-cooked with ham hocks. Similarly, a highly strung turnip wine with a whiff of the barnyard simmers with a chuck roast until the beef and the rooty wine sweetly become one.

Once the afternoon’s racking is complete, she peels and cores Bosc pears from her CSA share before melting honey in hot water to make a syrup. The house smells like a distillation of autumn, and the windows steam. Over a year, or perhaps two, the pear wine will turn amber and grassy and will pair perfectly with an ancient cheddar, back in the city for a weekday picnic in a park, when the sun is again high and a Hudson-born breeze is a relief.

But now, a cold night outside, we eat herbed roast chicken and drink a chilled Lilac ’08, made from flowers gathered from her mother’s garden in New Hampshire. The blond wine is off-dry, lightly effervescent and slides down like incandescent stories, so that after two glasses one’s blood sparkles with unstoppered spring.