Meanwhile, Citymeals-on-Wheels, the nonprofit that provides hot weekend meals to the homebound elderly, has teamed up with GrowNYC to deliver fresh fruit and vegetables. 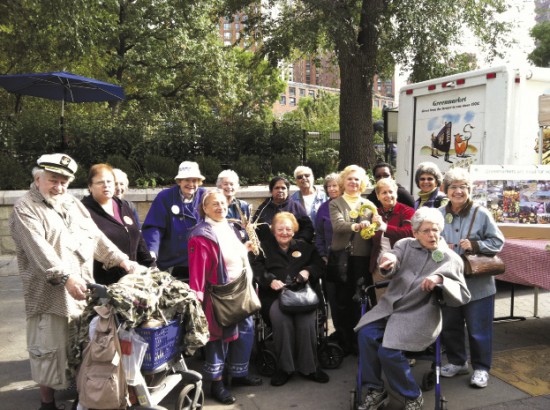 It’s not easy getting old in Manhattan. Subway stairs seem steeper and that eight-block hike to the nearest supermarket feels longer. But GrowNYC, which runs the Greenmarket and other eco initiatives, is working to make things a little easier for elderly urbanites.

The liveliest part of the three-pronged effort is market tours specifically for seniors. Working with senior centers around the city, GrowNYC helps to arrange transportation, provides guides, sets up cooking demonstrations and, through the USDA’s Seniors’ Farmers Market Nutrition Program, gives participants $4 coupons to spend on the likes of cucumbers or cantaloupe that taste like the stuff older folk grew up on. The tours have been a revelation not just for the seniors, but for many of the farmers as well.

Many of the seniors have gardening experience, says Alexis Stevens, who manages the Greenmarket’s EBT (aka food stamp) outreach, and also organizes the tours. “They’re knowledgeable and enthusiastic,” she says. “There’s a bit of knowledge exchange.” And though some seniors were a bit cautious when offered smoked bluefish at the Blue Moon Fish stand, the snack was a big hit, Stevens reports. “We had to pull one guy away.”

Meanwhile, Citymeals-on-Wheels, the nonprofit that provides hot weekend meals to the homebound elderly, has teamed up with GrowNYC to deliver fresh fruit and vegetables. The average client is over 85, explains executive director Beth Shapiro, and often can’t get out to the corner grocery, cook for themselves or eat anything but soft food. Cherry tomatoes or blueberries are a godsend.

Last year the organization started a pilot program in East Harlem, and now it’s picking up fresh food from Greenmarket Co., GrowNYC’s new wholesale arm, and delivering it to 300 people a week. Good nutrition is crucial for the elderly in ways we might not imagine, Shapiro explains: Prescription doses, for instance, are based on an assumption—often inaccurate—that those who take them are getting adequate nutrients.

Greenmarket is even running a CSA program for underserved populations. Using a refrigerated truck, it’s delivering boxes of fresh produce to neighborhood houses and senior centers. The program started last year at three sites, and is expanding this summer to four more.

For the seniors receiving June strawberries and July peaches, the golden years just got a little sweeter.