A look back at a career that ended too soon and has been overshadowed by a famous male chef’s violence. 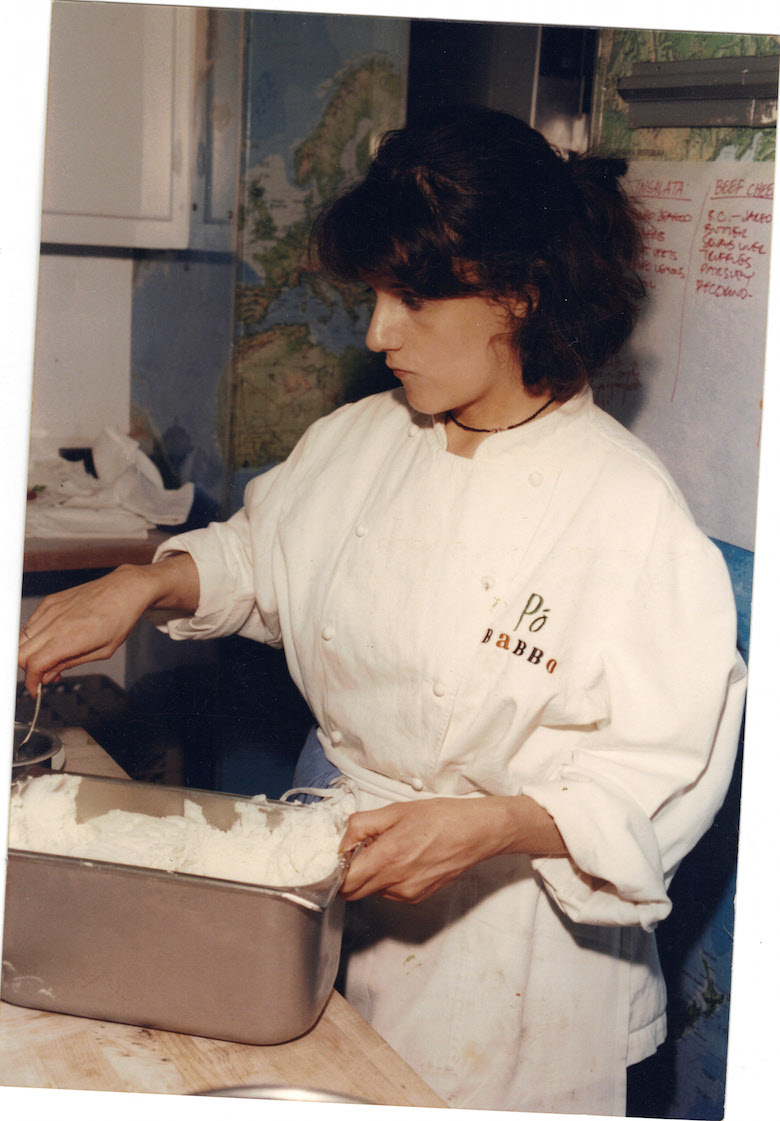 In restaurant circles, the name Gina DePalma will always be adoringly associated with the canon of great American pastry chefs, most notably for her pioneering work establishing Babbo as the gold standard for Italian pastry in America. After Mario Batali’s fall from grace, the food media has fixated on the state of the Batali empire without Mario’s largesse. As we pore over the autopsy results, Gina’s voice is noticeably absent from the post mortem conversation.

It’s unfortunate, because Gina always had colorful opinions. Until her death from ovarian cancer in 2015, she was a strong voice for women in an industry that has systematically subjugated female chefs and marginalized pastry. Gina’s reign of excellence at Babbo occurred at a time when toxic masculinity in the restaurant industry had reached a zenith. The patriarchy bothered her, but she understood its fragility and found ways to survive, even thrive, in the misogynist swamp. It wasn’t always easy to see the chip on her shoulder, because it’d been dusted over with years’ worth of confectioner’s sugar.

Crafting beautiful desserts while her male counterparts fostered a culture of abuse required steely resolve. On the surface, her brazen nature allowed her to run with the wolves. But she was soft like a budino on the inside, channeling her femininity into the mixing bowl.

Gina’s saffron panna cotta, a Babbo signature, jiggled softly in the center of the plate, cuddled by a quenelle of housemade sorbetto. Devouring it is sensual. Before you even take a bite, it teases you with the aromatics of pink peppercorn. She poached seasonal fruits like apricots and quince in syrups accented with exotic spices. The custard itself just barely, almost impossibly, holds its shape as your spoon glides through it. You’re certain of its imminent collapse. But its architecture is resilient, even defiant, and, like Gina, the gelatin firmament withstands the challenge to its integrity, resolute until the last bite.

Babbo guests would obsess over Gina’s maple mascarpone cheesecake. Guests who ordered it once would never order anything else for dessert again. Its popularity drove Gina batty and she would occasionally take it off the menu, making it impossible for guests to ignore the rest of her desserts.

If it was anyone else, it might have seemed vindictive, but Gina was doing it for your own good, the way a mother would when she knew what was best for her children. The soft landing that ended every proper meal at Babbo was integral to the experience and provided a necessary counterpoint to the offal-happy richness of the savory menu.

As is true of many women who work in restaurants, Gina never quite received the recognition she deserved during her lifetime. After having been nominated for a James Beard Award for Outstanding Pastry Chef six times, she finally won in 2009 after having been diagnosed with cancer. She jokingly referred to herself as the Susan Lucci of the Beards—a reference to Ms. Lucci’s many failed bids at an Emmy Award for her role in All My Children. Though Gina was happy to be recognized, you could tell she was hurt that it took being diagnosed with a terminal illness to nudge her into the winner’s circle.

At the time of her death, Gina left manuscripts for an unpublished book about Italian food and travel. Her first cookbook, Dolce Italiano, was admired by many and one could sense that she was invigorated by the opportunity to distinguish her voice from Mario’s. She’d been living in Rome intermittently, researching her book, when she was diagnosed with cancer. While her health was failing, even after a preventative double mastectomy, she dedicated almost every drop of life energy into meeting her editor’s deadline.

Fears of losing her job and her health insurance consumed her as she worked continuously throughout years of chemotherapy. Gina would be up early for CAT scans and blood tests to check her T-cell count before heading into the restaurant, sometimes hours before most of her staff arrived.

As the 20th Anniversary of Babbo’s opening came and went without fanfare last year, it was difficult not to think about Gina’s unpublished manuscript languishing in a thumb drive somewhere. Plans to release a cookbook commemorating Babbo’s anniversary had been scrapped. There was no longer a market for anything with Mario’s name on it.

Could there be any more poetic justice than a publishing house resuscitating Gina’s unseen manuscript to make a bold statement about promoting a woman who spent almost her entire career in the shadow of a disgraced male chef? It would be heroic, but unfortunately poetic justice doesn’t always sell books.

Gina’s contributions to the success of Babbo went beyond her desserts. In the restaurant’s infancy, Gina handled many of the administrative duties that would normally be delegated to human resources. Like most fledgling restaurant groups at the time, there was no HR Department. Gina became the de facto resource for any FOH and BOH staff concerns, including emotional ones. No one ever officially anointed her to this role; she seemed to embrace it out of maternal instinct. She had no children. The staff was her litter. In Gina’s obituary, Mario called her “the mother soul of the entire kitchen.”

Gina wasn’t perfect. As some mothers do when exhaustion takes hold, she had a tendency to martyr herself when she felt under-appreciated. Sadly, she had more admirers than she knew or, perhaps, was willing to acknowledge. More than industry accolades, though, she yearned for recognition from inside the walls of the restaurant. Sadly, many of her deeds went unnoticed.

Regardless, the restaurant’s success would not have been possible without Gina’s contributions. In her three-star review of Babbo for the New York Times, Ruth Reichl wrote of the saffron that flavored Gina’s panna cotta and its accompanying peaches, “It is like the restaurant itself: an unusual combination of ingredients that seem destined to be together.”

Frank Bruni affirmed Ms. Reichl’s three-star opinion in his 2004 review, calling attention to Gina’s pine nut crostata as something delicious “that you would never see anywhere in Italy.” It made sense because Gina wasn’t from Italy; she was an American of Italian descent, committed to understanding and showing respect to her roots. Her cooking could be best understood through the prism of her heritage: born on Long Island and raised in Virginia on hard rock-and-roll and just-filled cannoli.

She vehemently rejected the idea that “passion” was integral to great cooking and didn’t think great chefs needed to be passionate to succeed. It seemed like a controversial idea at the time but in retrospect she knew that if a young passionate cook couldn’t handle the vocational nature of professional cooking, that his or her passion would flame out. Her pragmatic approach hardened her staff, and many of them would go on to influential careers in their own right, as she had under the tutelage of Claudia Fleming at Gramercy Tavern.

In the wake of the Batali scandal, we still compartmentalize the accomplishments of women in restaurants, honoring their excellence with consolation prizes like “Best Female Chef.” One possible way to confront gender imbalances in the industry is to celebrate the women whose careers were overlooked at the time these indiscretions were committed, instead of assuming that progress is only possible by acknowledging female chefs going forward. Healing may come easier if we take time to champion women chefs like Gina, whom history has forgotten, by decoupling their achievements from the patriarchy that has lorded over the restaurant industry for so long.

Gina’s career ended much too soon, and those of us who worked alongside her bear the burden of her fading legacy. We owe it to her memory to talk about her achievements and other women who, like Gina, forged careers as professional chefs and contributed to the explosive growth of the restaurant business and to its emergence as a cultural phenomenon.