Nischan has had many culinary successes as well as stark reality checks that have inspired him to take action for multiple causes. 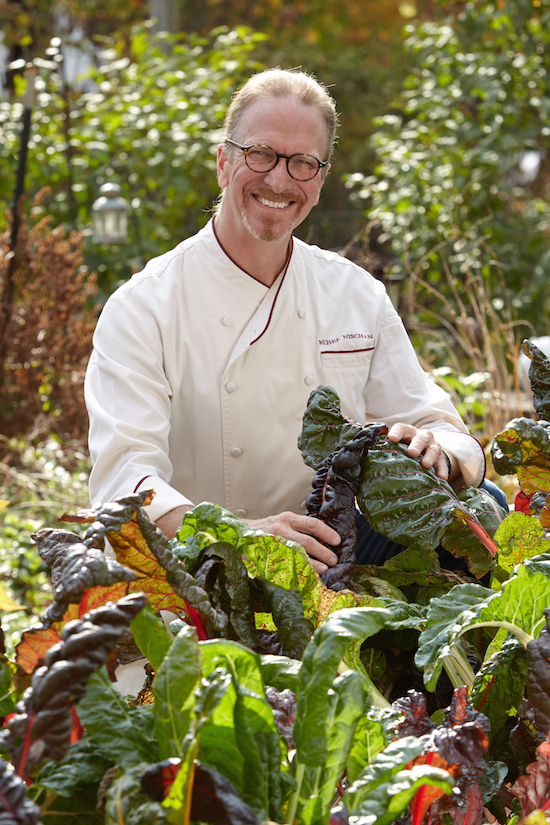 Michel Nischan’s first advocacy initiative was paying farmers in advance to grow vegetables and herbs (instead of corn and soybeans) for his menus. Photo credit: Tom Hopkins

Chef and activist Michel Nischan received his third (yep) James Beard Foundation award a couple of days ago, and this time it’s as the “Humanitarian of the Year.”

Just one is a big honor, but three’s especially significant for someone who entered the kitchen so he’d have a steady wage and one or two free meals a day. Nischan learned early on that hard work doesn’t always pay; the family struggled to make ends meet, and at times, helped out on Nischan’s grandfather’s farm in exchange for food. They also occasionally relied on the federal food stamp program to supplement their pantry.

The celebrated chef started his cooking career when he was barely out of high school, and thanks to a “farmer’s proficiency” in butchering meat (a skill not then taught at major cooking schools), he quickly rose through the ranks to the position of executive chef at Milwaukee’s Fleur de Lis in the early 1980s. This was the job that inspired the first of many epiphanies: he was convinced that restaurant kitchens should use local, fresh food. This sentiment inspired what he calls his first act of advocacy, which was paying farmers in advance to grow vegetables and herbs (instead of corn and soybeans) for his menus.

Nischan has had many culinary successes as well as stark reality checks that have inspired him to take action. For example, when he discovered his son had Type 1 diabetes, he learned that diet was key in treating the disease. In turn, this knowledge made Nischan question the content of his menus, so he decided to abandon a tradition of high-end kitchens using butter and cream at his “restaurant of well-being” aptly named Heartbeat.

As his name became synonymous with local, healthy — but still expensive — cuisine, he began to focus more on the connection between obesity and poverty. He came to understand that many poor families have limited access to fresh and nutritious food for many complex reasons, and guilt over the prices he charged for his healthier fare led him to his current mission as the co-founder, CEO and president of Wholesome Wave: a nonprofit that works to ensure that all families can eat affordable, seasonal, unprocessed and nourishing foods.

We spoke to him from his Connecticut living room about his current passion:

Edible Manhattan: You were one of the earliest chef-activists to lobby for agricultural sustainability and against hunger. What motivated you?
Michel Nischan: The reason it was important to me was because I grew up with my parents struggling with poverty but we always had good food.

EM: McDonald’s got its start in Des Plaines, Illinois — aka your hometown. That must’ve been pretty cool to a kid.
MN: When I became a teenager and once I started working in kitchens, I was more into omelets [than McDonald’s]. My first job was a breakfast cook at a truck stop and that’s where I learned how to make them.

EM: I must say that there’s no better food in the world than at a truck stop.
MN: It kicks ass. We can use a griddle like nobody else can.

EM: When did you make the transition from cooking to advocacy for a living?
MN: In the early 2000s, I started “hobby” food equity projects with Gus Schumacher. Then in May 2007, I shattered my heel in a climbing accident and was on my back for twelve weeks. I used that downtime to found Wholesome Wave.

EM: Leave it up to a chef to refuse to recuperate like the rest of us by like, say, watching old Law & Order episodes.
MN: I can’t do that. I feel like I’m letting down mankind, and myself in general, if I spend more than an hour watching television.

EM: Tell me about hunger in America.
MN: We suffer from something I call  “opportunity deserts;” we are a land of vast swaths of communities where almost no opportunity exists. I’ve been to [Chicago] neighborhoods where the only place within 60 square blocks to buy food, and only processed food, was at a liquor store. They have Hamburger Helper but no hamburger. People can be fat, hungry and malnourished and they have no choice about it.

EM: Do you think that hunger will always be an issue?
MN: The problem of hunger absolutely can be solved; the question is will it be solved. I think the problems that create hunger are the hardest ones to solve because they include things like real living wage legislation. It’s also about leveling the playing field on price so every American, regardless of income, can exercise their basic human right to feed their families wholesome food and lead productive lives. Look, when we go back to post-World War II, what created the middle class in America was that the wealthiest of the wealthy were paying a share of taxes proportionate to the success our country afforded them, and education was nearly free and high quality. Imagine if Wall Street today rewarded companies for performance in social responsibility, if we could actually affix a true financial value to business behavior that makes communities whole. Imagine that.