Cooking Up a Future

At Food & Finance High, students gain skills for the kitchen—and beyond. 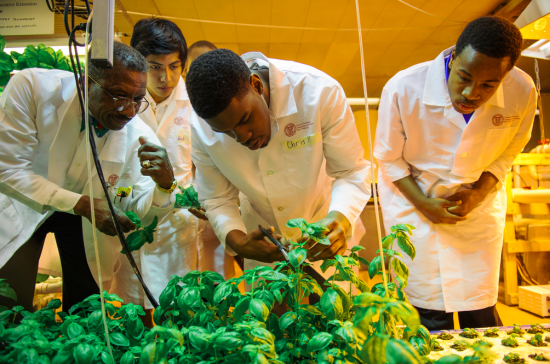 The most local fish in Manhattan cannot be sourced at any Greenmarket—they’re swimming in a school in Hell’s Kitchen. And definitely the only local pineapple can be found in the same unlikely place, growing far from Hawaii alongside lettuces and herbs in a green and leafy garden rooted in water instead of soil.

But those thousands of aquacultured tilapia and the Dole competition are not the only surprises at the Food and Finance High School on far West 50th Street, where teachers are addressed as “Chef” and teens wield knives after entering through the metal detector. This is a place where 10th-graders talk about mise en place, where hand-painted scenes from In the Night Kitchen grace an otherwise-industrial hallway, where the detention center is being converted into a café, run by students and open to the public.

And, because celebrities count, it’s a school whose advisory board includes some of the biggish names in Manhattan’s restaurant world, including Andrew Carmellini, Bill Telepan, Missy Robins, Amanda Freitag and the chef who recruited them all, Marc Murphy.

Food and Finance High, founded in 2004, is the only vocational public school in the city with food as a “major.” Students take all the academic classes needed to graduate with a Regents diploma, but they also learn to cook—in one classroom they were recently finishing chicken velouté; in another, preparing to bake Danish—and get many lessons in physics, math, biology and chemistry through the prism of food.

Tilapia and basil, soups and pastries are very good teachers, as is food history itself. As one working chef/instructor noted, pointing out on her whiteboard a timeline since ancient Greek and Roman cuisine: “Food didn’t start with the Food Network.”

Thanks to paid internships in Manhattan food businesses and restaurants such as the newly three-starred Modern, students gain certification by the National Restaurant Association, something many pro cooks will never acquire. They also graduate with portfolios proving they know more than just how to mince garlic and chop chicken: In 10th grade they study management and “build” a restaurant from the ground up, costing it out and designing everything down to the color of the walls. I had to do that at the old New York Restaurant School, and I was a career changer. 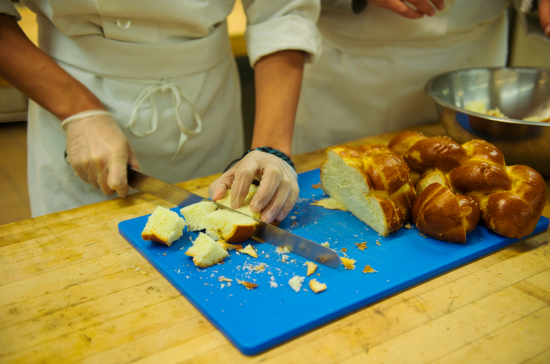 But students get many more experiences I never had, such as acting as sous-chefs to city firefighters for the Daily News Five-Alarm Cookoff, or doing actual catering for the Food Network or Food & Wine–sponsored events, many showcasing school-grown tilapia, herbs and lettuces. An after-school program called EATWISE opens up extracurricular opportunities to cook or bake more, learn about nutrition or take up non-food pursuits such as guitar, chess or debating. (Who knew 4-H clubs were meeting so close to Times Square?)

If the school were only training (mostly minority) kids for kitchen careers, it would be impressive enough. But 80 percent do not go straight on to jobs in restaurants or bakeries or hotel kitchens, or even management. They move up to college, many of them on paid scholarships won because they have learned the first rule of chef success these days: competitive cooking. One student is at Johnson & Wales on a four-year scholarship worth $100,000; another is at the CIA, to the tune of $96,000. But for every student who goes on to higher-cooking ed, there might be one at Syracuse University, or Buffalo State or Virginia State.

That’s the good news. The bad is that even the antithesis of a stereotypical failing New York City public school is subject to that weariest of clichés, the budget ax. The Bloomberg administration recently whacked $45,000 from the food outlay for the food school (to be fair, it also chopped construction money for the city’s construction school). So a program that is demonstrably working well and doing good has to grub for private support, or the tilapia could be more sustainable than the success.

Nan Shipley works with the nonprofit Food Education Fund to fill in the gaps, with fund-raisers. A benefit hosted by Ted Allen at the Chelsea Market May 13 will lure generous gourmands to donate some dough while rubbing chef-whites elbows with the likes of Aaron Sanchez, Marc Murphy and Alex Guarnaschelli; money raised will go toward building a greenhouse on the roof and opening that café.

Shipley, whose own three children attend private schools, says she feels obligated to level the learning field for those with lesser means, which definitely describes most of those enrolled at Food and Finance High—87 percent come from families with income so low they qualify for free lunch. Most do not even have the money to pay application fees for college, let alone tuition.

“These kids leave with something: focus, a skill set, a lifelong passion for learning and creating,” Shipley says. “They develop work habits, eating habits, interview skills. These students are technically precise and creative thinkers. They consistently win every culinary event they enter, and many win scholarships to prestigious culinary schools.”

Food & Finance High opens up a big, wide world for its student body, many of whom travel long distances from other boroughs to attend. (One from Staten Island gets up at 4 a.m.) As Shipley notes, every chef who takes on an intern changes that student’s life forever. But instructors also take classes on field trips, as Adrienne Terzuoli, who teaches baking, did to Johnson & Wales in Providence to show the potential.

Yocary Luna, who emigrated from the Dominican Republic when she was 6½, is one of Food and Finance High’s poster students: She chose the school partly because it had just opened, not because she wanted to be the next April Bloomfield. Still, she learned to extract every advantage: In her four years there she volunteered at all CCAP and Food Network events, stayed after school to study more and by her senior year entered a scholarship cooking competition, just for the experience. Shocking herself most of all, she said, she won first place, with full tuition to Monroe College in the Bronx. 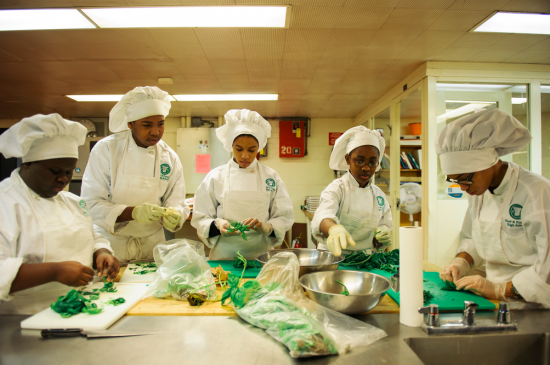 Given that the most useful skill in cooking today is critical thinking, it’s revealing how she approached the mystery basket to make her winning dish. The contents comprised chicken, goat cheese, fingerling potatoes and string beans, with any other ingredients allowable. She stuffed the breast with assorted vegetables, “the way we practiced in school,” and did the potatoes and string beans to Escoffier standards. But the most telling detail is that she omitted the goat cheese, because to her palate there was no way to make it delectable.

At Food and Finance High, she said, “we took classes like any other high school, like math and English. But food made me enjoy school more.” Her goal is to open a restaurant in Miami one day.

Another graduate, Shania Thomas, won the first Teen “Chopped” on the Food Network and now holds down two part-time restaurant jobs. She will be starting at the CIA in May after winning a partial scholarship.

As Shipley notes, Park West, the school that occupied this building before Food & Finance, was notoriously dangerous. In 1988, the New York Times described it as “a center of violence and fear”; in 1992, a 10th-grader was shot at 10 o’clock in the morning in a hallway. And while Park West had a food arts program, by the mid-1990s most of its 18 kitchens had been abandoned for a decade because the school had so many problems.

Now, every year 4,000 eighth-grade applicants list Food & Finance in their top choices. Only 150 are accepted (with attrition, current total enrollment is 430). These students are not all Daniel wannabes, though—many middle-schoolers have as much interest in cooking as they might in geriatrics. They apply for the quality of the education.

All six teachers of the cooking and baking classes have industry experience; even the principal, Roger Turgeon, has worked as a chef. Their charges start cooking as freshmen and by the time they are seniors move into paid internships, 200 hours a semester served in addition to their full course loads. They may work front or back of the house at restaurants such as Beacon and Ditch Plains, bakeries such as Amy’s Bread, or the Food Network. Evyette Ortiz, director of marketing for the Ark restaurant group, accepts four to five students a semester and works with Jessica Mates at the school to make sure they are actually learning—those who aren’t happy working 9 to noon wiping down menus in an empty restaurant are switched to more fulfilling jobs.

One intern was recently placed with Anne-Marie Noonan, the group’s best pastry chef, at Bryant Park Grill, where they “work side by side,” learning focaccia and working up to desserts. Another worked with Ortiz herself to learn social media for restaurants—Facebook, Twitter, Instagram—and is now studying broadcasting at Ithaca College. Some interns work as hostesses, as at Clyde Frazier’s restaurant, where one graduate has just been hired as a runner.

As valuable as the off-site teaching is, the fish and greens labs are integral to Food and Finance High. The waterworlds are run by an acclaimed scientist, Philson Warner of Cornell University, who also conducts experiments in breeding with student assistance. His tanks hold 10,000 fish, but as he notes, the only thing in the lab that smells fishy is the food they eat. (As he tosses a handful of the piscine kibble into a tank, it explodes with bodies surging for a bite.) Beyond tilapia, he grows striped bass, catfish and swai (also known as bassa), with Australian lobster and shrimp as bottom feeders to keep the tanks clean.

Students trade their chef wear for lab coats to work with Warner, learning chemistry and physics and other disciplines. Switching gear again, they learn to fillet and cook their crop back in one of the six kitchen-classrooms.

Tilapia has been an ingredient on “Top Chef,” but don’t hold that against it. Here it’s also used in classes, served in school cafeterias and at events the students cater and donated to food pantries. Plus the school sells it to the public on Fish Fridays, for $2.50 a pound whole, $5 for fillets. (If you want the ultimate local fish, e-mail matesjessical@aol.com by 2 p.m. Tuesday).

In Warner’s “garden,” students tend 15 types of lettuce, seven kinds of Chinese cabbage and 15 herbs, including four types of basil, all fertilized by the fish, if you catch my drift. This is all in typical-Manhattan tight quarters, but Shipley’s group hopes to raise enough money to open that 2,000-square-foot greenhouse next year.

And Café Murphy should open sooner, giving the public a regular chance to taste what the school has produced. Everything will be made and served by students in this sleek, circular space, named for the late Richard Murphy, an advocate of disadvantaged kids, who helped start the school.

The fact that the detention center is no longer needed is just icing on the cupcakes. Clearly the one-of-a-kind Food and Finance High formula works. Maybe the recipe should be doubled.

Regina Schrambling had to pay for her education in cooking and management, at the New York Restaurant School 30 years ago this summer.