It Takes a City: The Collaborative Design Effort Behind Drive Change’s Snowday Truck

How one decommissioned Con Edison truck rolled into Brooklyn and rolled out serving pulled pork sliders. 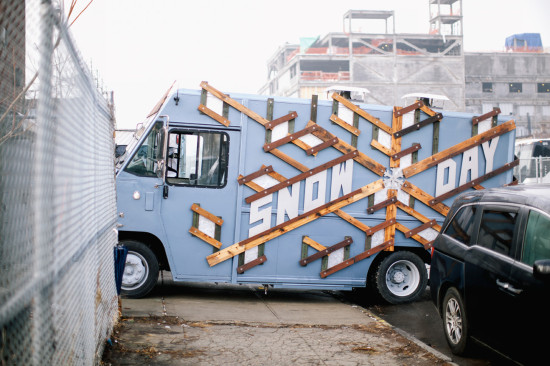 Recently, Edible got to peek behind the scenes and talk with the fabricating creatives behind Snowday — Drive Change’s soon-to-be-launched epicurean-cum-social-justice food truck, featured in our March–April 2014 issue.

Thanks to the handiwork of these fabricators, the one-time Con Edison service truck is now road-ready to serve up praiseworthy maple-infused eats while providing jobs and training for formerly incarcerated youth.

The vehicle’s conversion was an inside and outside job that relied on the combined efforts of Bushwick’s Shanghai Mobile Kitchen Solutions and Dumbo’s Situ Studio, whose fabrication takes place at the Brooklyn Navy Yard.

Drive Change founder Jordyn Lexton, a one-time high school teacher at Rikers Island’s East River Academy, knew she wanted a state-of-the-art vehicle with rustic elements that reflected the full range of the venture’s many facets. She looked to Situ Design to pull off this poetry when college classmate Ben Ahles, a metal worker at Situ, made the introduction.

At the time, Lexton hadn’t even bought the truck, but Situ partner Aleksey Lukyanov-Cherny quickly got on board. “You know, you meet Jordyn and you realize how amazing she is, how smart, how passionate, and it’s kind of hard to say no,” he says. 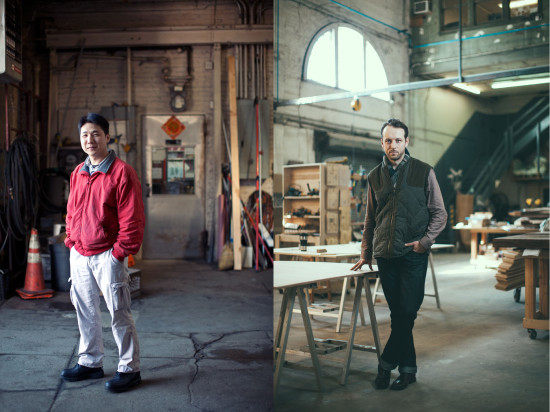 Ukrainian-born Lukyanov-Cherny moved to the States when he was 10 and went on to graduate from Cooper Union’s School of Architecture, where he and his three fellow Situ partners have known each other since “day one of 2000 freshman year.”

Several years in, the four started up “a small shop doing some custom furniture pieces for people we knew,” using the income to pay rent. Then, rather than take the traditional post-grad architecture path (involving years of earning credits in order to take the bar exam, which itself takes years to complete), the quartet decided, “let’s scrap this, let’s try something different. And we just started a design and fabrication practice,” says Lukyanov-Cherny. This year the Architectural League of New York counted Situ among “Emerging Voices 2014” award recipients.

Lukyanov-Cherny says that for Lexton it wasn’t enough “to paint the truck a color and put some stickers on it. She wanted to have the food as this really beautiful unique thing, but also the truck out of which the food is coming.” He describes her “three-pronged approach”: “She hired great people to cook up the menu and get the food. She obviously has great social justice backings. And she also felt like by hiring us she was going to bring in that design entity, a design face to this truck that will also hopefully will make the overall business successful.”

Despite Drive Change’s small budget, Situ, now 35 employees strong including the four original principles, agreed to develop a concept and design for the exterior cladding system for Snowday. Their first foray into the culinary world, they were thrilled to add “a moving piece of architecture” to their portfolio, while the social justice component was right in line with the operation that has produced work for Doctors Without Borders, Solar 1, “projects and issues that deal with human justice, violations of human rights,” the city and a number of NGOs.

While Situ crafted the exterior, it was to Shanghai MKS that Lexton turned for the interior build-out. “There’s no way we could have taken that on, that’s a very specific trade,” says Lukyanov-Cherny. “Shanghai is famous for doing this in New York, they’re like the go-to people for any kind of mobile food project,” he says. “So like half the trucks on the street you see in New York are all built out in Shanghai, including the food carts you see pushed around. So they’re like a family old business that have been doing this work for decades.”

And indeed, Shanghai’s been busy building mobile food vending units since 1989. Their food truck clients include everyone from Van Leeuwen Artisan Ice Cream and Rickshaw Dumpling to Kimchi Taco and Waffles and Dinges. 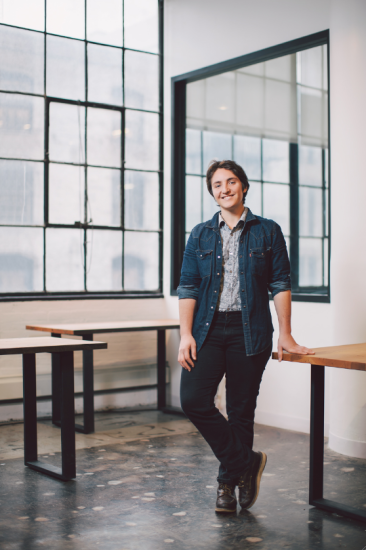 Before food trucks took over the streets of New York, “We were actually a stainless steel fabricator building commercial kitchen equipment,” Wong says, “primarily for the Chinese fast-food industries. So wok stoves, smoke houses, steam tables.” Originally located on Center Street north of Canal, they served the flourishing Chinatown area and then moved to Brooklyn in 1994.

Wong’s Chinese-born parents, both came to the U.S. in 1965. They met here, married in ’72, started a family, then started up Shanghai, first incorporating with partners as Shanghai Stove Inc., then taking the operation over as a family business in 1982. What started as a repair on a coffee cart eventually led them to become the city’s source for restaurants on wheels.

According to Wong, Lexton and Shanghai met up during her seven-month stint as manager on a Kimchi Taco truck. “We spent three to four months on the designs, just coming up with layouts based on what her needs were,” says Wong. “So, we’d start off with a cart like this [shows picture] and figuring out how logistically things were supposed to be placed,” he continues. “Not just have five pieces of equipment and just throw it in and good luck have a nice day, but make it make sense.”

He clarifies: “If a fryer’s inside, and the product is going to be French fries, and those need to be frozen before they’re fried, you need a freezer and the freezer needs to be close to the fryer not on the other side of the truck.” And then he explains why.

“‘Surge production,’” Wong calls it, “like in the military.”

A lunchtime truck has a 2½- to 3-hour window to serve its clientele as efficiently as possible. “So if you can pump out 100 orders, or you can pump out 300 orders, it makes a big impact on your bottom line. Design becomes very important to that,” says Wong like a sports coach, his seriousness and drive making it clear why Shanghai’s services are so sought after.

Though he demures, “We’re not trying to be number one, we’re just trying to make good products.”