50 Years of Digging for Mold 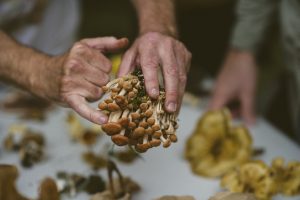 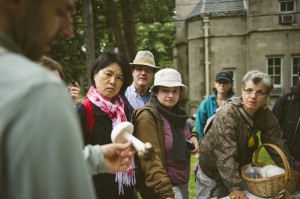 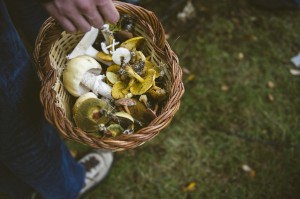 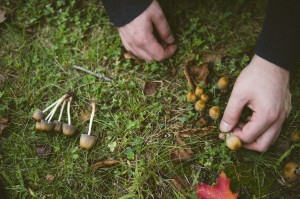 The New York Mycological Society has had a couple of starts and stops during its 100-plus-year history, but today’s incarnation grew out of a mushroom identification course that the avant-garde composer John Cage taught at the New School 50 years ago this fall.

Cage turned many folks on to mushrooming. I’ve met a number of people with no particular interest in mushrooms who claim to have hunted with him. (In New York, that’s kind of like running into people who’ve said they’ve gotten drunk with Norman Mailer.)

This year marks the 50th anniversary of the Society, of which I’m now president, as well as the centennial of John Cage’s birth. But the quirky collection of 200-plus scientific-minded pleasure seekers is always celebrating to a certain degree.

While we are urbanites who love to tromp around in the woods in pursuit of mushrooms, we come from all walks of life. And once you start looking you’ll find mushrooms—and mushroom hunters—everywhere. That snappy entertainment lawyer who set up your book deal? He has hiking boots and a compass in his briefcase. So does your plumber. So does the lady who sells antique watches, and your kid’s pediatrician and a whole bunch of graduate students wearing so much facial hardware they can’t get through security at the airport without setting off alarms.

In short, we are a disparate, eclectic bunch bound together by our fascination with some of the most ubiquitous but least understood organisms in nature: fungi and their fruiting bodies, mushrooms.

My journey into the fifth kingdom started with basic venality. I love to eat all types of mushrooms, especially wild ones. But mushrooms like porcini, chanterelles and morels are hellaciously expensive and too often worn out after their long journey from the wilderness to Manhattan. I wanted to find them in the woods myself: fresh and free. And then I learned about the New York Mycological Society and their guided mushroom hunts. Plus, the price of membership was right: $20 a year.

The Society offers an array of activities, including many guided walks in tristate-area parks during summer and fall, and a few big forays every year—such as the morel breakfast in the spring, where we hunt an abandoned apple orchard in Rockland County, and the chanterelle weekend in July, held in the Catskills.

We enjoy more academic pursuits was well. Last year, for example, Dr. Ekaterina Dadachova, a nuclear biologist, gave a talk about the weird black fungus living inside the nuclear reactor at Chernobyl. And of course we do lots of eating: a banquet featuring mushrooms during the winter, a Roman feast, a Cantonese banquet (at which we sing our unfortunate anthem, “Oh Goddess of Decay”).

The history of amateur mycology (from the Greek myco = fungus, ology = study of) in America is not that long. While Indians and immigrants gathered the mushrooms they knew were edible or medicinal, mycology didn’t gain momentum as a hobby until the 1880s. Botany—which included fungi in those days—was one of the most popular of the sciences for turn-of-the century hobbyists. These enthusiasts collected specimens, created lovely botanical drawings and conducted fieldwork that contributed to the body of scientific knowledge. Indeed, amateurs contributed many of the samples that fill botanical garden archives nationwide, including those in the New York Botanical Garden’s mushroom collection.

But it was not until the death, in 1897, of Count Achilles de Vecchj, an Italian diplomat residing in Washington, DC, that mushroom clubs really began to proliferate in the United States. The Count died from eating Amanita muscaria. The most iconic of all mushrooms—a red cap with white spots on it—it is not usually fatal, although it can make you very sick or get you high, depending on what part of the world the specimen comes from, how you prepare it and how much you ingest. (It’s unknown why A. muscaria took out the Count. It only made me pass out for a couple of hours.)

His poisoning, which was widely publicized, led the U.S. Department of Agriculture to issue public advisories about toxic mushrooms. They, and the 1900 publication of Charles McIlvaine’s two-and-a-half pound book One Thousand American Fungi, which describes hundreds of edible (although not always tasty) mushrooms, ushered in an increased interest in fungi, and mushroom clubs began to, well, mushroom. Today there are at least 95 mycological societies in North America.

Many mushroom clubs host hunts that are open to the public. At the Breitenbush foray in Oregon, I have hunted the marvelous matsutake, a mushroom that perfumes rice with the flavor of red hots and sweaty socks; at the Crested Butte foray in Colorado, I’ve hunted gorgeous fat porcini and cooked them with mountain thyme and beef cheeks; and at the Telluride Mushroom Festival, I’ve eaten magic mushrooms with a hot chocolate chaser.

I’ve even attended the Morel Mushroom Hunting Championships in Henry, Illinois, and while I didn’t win a trophy, I did bring home three pie boxes filled with morels as large as grenades, cooked them with shallots, butter and cream and dumped them over toast. Around here, I’ve hunted in city parks, then sat in the subway, basket brimming with velvety black trumpets, which I like to pickle and eat on a baguette oily with my home-canned Greenmarket tuna.

All of the New York Mycological Society’s forays have a scientific advisor in tow, to help with identification. This is important because the morphology of mushrooms can vary according to their habitat and age. The Society has a number of expert amateurs, like the director of the lyrical mushroom film Now, Forager, but our guru is mycologist Gary Lincoff, author of the Audubon Society’s Field Guide to Mushrooms. Known in mushroom circles as the Woody Allen of mycology, Lincoff’s style may be Borscht Belt, but his knowledge is encyclopedic.

But the truth is, rumors of mushroom-induced death have been greatly exaggerated. Less than 1 percent of all poisonings reported to Poison Control Centers are attributed to mushrooms and, of those, only 1 percent are fatal. There are many, many wonderful edible mushrooms, and learning to identify them is really no more complicated than learning to identify berries.

And the beauty of it is, once you discover where the mushrooms are growing, you can usually return to that patch year after year. That access is what mycological clubs offer.

As a result of joining the NYMS, not only did I learn how to find the choice edibles I was after—and in places like the Woodlawn Cemetery in the Bronx, no less, where I’ve gathered armloads of nutty hen of the woods to roast with chicken and Marsala—but beyond the informative, I got swept up into the culture of this kooky, erudite community. And through the club I learned about the unique and graceful biology of fungi, eventually writing a book on the subject.

When I first started to study mycology I was surprised to realize how little I knew about this diverse and important life form. After all, I used to think they were plants. But by the time I finished writing, I came to understand that fungi were key to the healthy operation of the natural world. I may have started out interested in satisfying my appetite for wild mushrooms, but I ended up satisfying a much more profound hunger. I gained a deeper insight into how life is expressed on Earth.

The Society has a lot to celebrate this year, but honestly, every time we walk in the wet woods, it is cause for celebration. And every time we find a flush of edible mushrooms, it’s a party.

Eugenia Bone is the president of the New York Mycological Society and author of four books, most recently Mycophilia: Revelations from the Weird World of Mushrooms, which comes out in paperback in February.
Photo credit: Patrick Kolts