Where to Find a Manhattan Farmers Market Near You

Farmers markets flourish throughout the city. 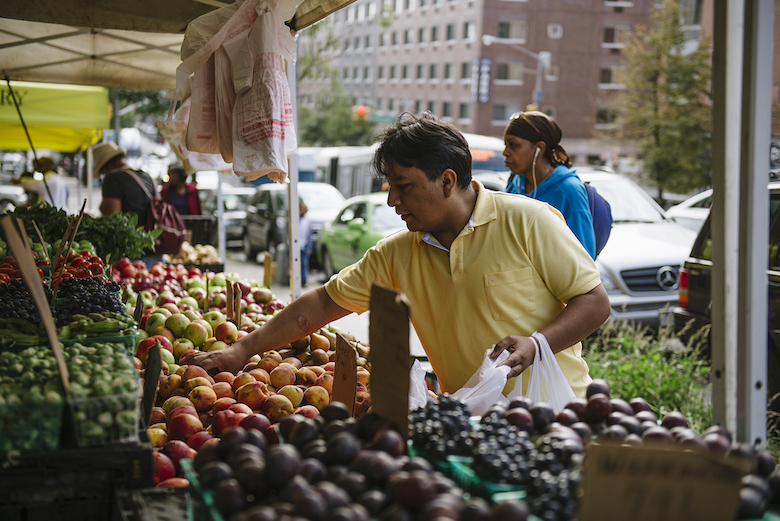 There are thousands of little things that whisper the arrival of spring in the city. The reopening of rooftop bars, the sprouting up of green stems, and farmers markets. While we’re lucky enough to have many farmers markets open year round, there’s something magical about the multitude of white tents that pop up around the city come spring.

They serve not just as a spot to shop but as a community gathering place where we meet up with friends and catch up with farmers.

We’ve updated our compiled guide and map of farmers markets in Manhattan and Brooklyn to make it easier to find one near you. Did we miss any? Leave us a comment or write to us at info@ediblemanhattan.com and we’ll add it to our list.

Switch it up today: spend $15 on food at your local farmers market instead of on a bagel with too much cream cheese and not enough lox #willtravelforfoods 🍽Down To Earth Markets 📍Chelsea, Manhattan

Meet 21-year-old Katherinne Mingo, who has worked with GrowNYC’s Youthmarket for the past three years. “When I started working for GrowNYC in 2016, I was a college freshman and I had no idea what to major in,” says Mingo. “Through my work with Youhtmarket, I discovered how much I enjoy interpreting for customers who can’t speak English. Now, I am working on Bachelor’s in Translation/Interpretation at Hunter College.” . ***Read more about the interview below, and thanks for sharing, Katherinne!*** . ➡ Has working with Youthmarket changed the way you eat? ✔ Katherinne: Before I didn’t think about the amount of salad I had with my rice. I thought that three pieces of lettuce was enough. I have learned that it’s important to have balance on my plate. . ➡ Do you cook at home? ✔Katherinne: I’m still not a fan of the kitchen, but now I enjoy making healthy snacks to bring to school. . ➡ What’s your favorite fruit or vegetable that you tried for the first time while working at the market? ✔ Katherinne: Niagara grapes. Also, I didn’t eat apples until I tried Galas at the market. . ➡ What advice would you give someone who’s thinking about working for Youthmarket? ✔ Katherinne: Be on time because setting up the market requires the help of all team members. There will be customers waiting for the market to open since they have to go to work. Smile and get to know the people who buy at the market – they always give you amazing recipes. Every customer is different, it’s important to treat them with respect, give them personalized attention, and attend to them quickly because that makes them come back. . . . #YMKTnyc #SupportLocal #LetsGrowNYC

We see pesto in your future 🔮 Plant up your sunniest windowsill with these basil babies from @centralvalleyfarm and you’ll have basil on hand all summer long. What are your favorite herbs to grow indoors? Tell us in the comments! #gmktspring #gmktnyc