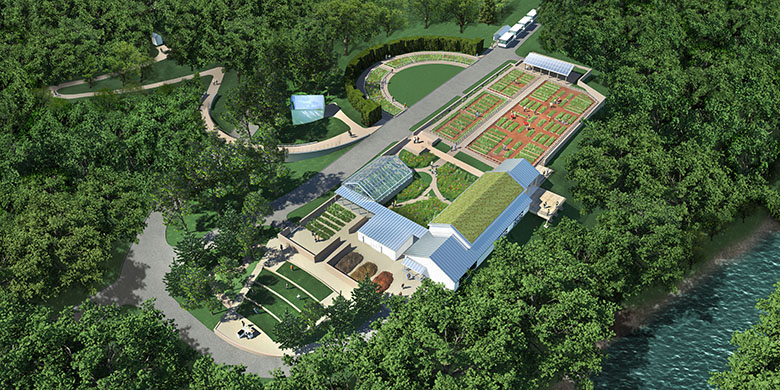 Breaking new ground comes with the territory at the New York Botanical Garden. This past fall proved no exception with the launch of the garden’s most ambitious undertaking in years: a $28 million Edible Academy.

Think Bronx meets Hogwarts. The academy hopes to be a magical school where urban youngsters learn that ingredients come from the earth and not the supermarket after all; just add sunlight, water and care.

Classes for schoolchildren, however, are just one component of the facility, which, come 2018, will provide classes, workshops, lectures and events for families and educators as well. The programs, which include distance learning opportunities, will emphasize hands-on education spanning from cultivating and growing food to cooking and nutrition.

The long anticipated state-of-the-art complex will feature a teaching greenhouse, a terraced amphitheater, a dedicated classroom building and expanded outdoor gardens. In total, and with Edible Academy alone, NYBG expects to “double the capacity of on-site learners”—from an already remarkable 50,000 to an astonishing 100,000 annually—and to double the footprint of the area from one and a half acres to three.

Looking for enriching activities for your child over Winter, Spring, and Summer Break? Science Camps, the Children's Gardening Program, and the new Nature Explorers Program offer families an exciting adventure to discover the world of plants. Registration is now open for our 2017 season! #nybgadulted

The expansion is a fitting tribute to mark the garden’s 125th anniversary this year and much of the inspiration for the project is to better serve an often underserved community. “We’re trying as hard as we can to basically be the school garden for the Bronx,” says James Boyer, the VP for children’s education at the garden. Part of their educational services even include assistance for teachers who are interested in “trying this at home,” or homeroom as it might be. “For the adventurous teacher who actually does want to try to do some indoor or outdoor gardening, we provide courses and supports and support lines,” says Boyer. “A lot of our school gardening courses are about integrating curricula, but [they’re] also about [answering questions like] how to start the garden, how to sustain the garden, how to get the principal’s support, how to get parents on board [and] how to raise small pots of money.”

It’s a brave new world for the Botanical Garden whose stated mission of serving as an “advocate for the plant kingdom” has broadened with the times. And while school gardening has always sparked interest, NYBG saw a surge in sign-ups from teachers, students and volunteers following the 2008 presidential election and First Lady Michelle Obama’s infectious enthusiasm for growing vegetables. The demand was there and growing, but the Botanical Garden lacked infrastructure to accommodate increased interest. Up until now, the garden site for edible education has had no indoor facilities aside from some covered pavilions. “And so we quickly moved to conceive of some sort of building,” says Boyer.

The original plan for a one-room schoolhouse and a greenhouse was soon scrapped as insufficient and supplanted with the sustainable vision of the Edible Academy complex. This means office space for staff and volunteers, and not one but two dedicated classrooms: the first with cooking facilities for school cooking programs, cooking demos and family programs like cooking camps; the other outfitted with modern technology for distance learning.

Three generations of Children’s Gardening Program students, together here at NYBG for the program’s 60th Anniversary Celebration last Saturday! 🌽🍅🌻Reuben just started the program this week, his mom Liza participated from ’88–’91 and her mom, Jane, was in the program from ’67–’71. ☀️ Were you in Children’s Gardening Program? What’s your favorite memory from NYBG? #nybg #nybgchildrensgardeningprogram #nybotanicalgarden

What’s more, the new construction will be done with the highest standard of sustainable tech by architecture firm Cooper Robertson, specialists in the field that have worked with NYBG over the years. The plans include “much more modern facilities for starting seeds, as well as all the green infrastructure that will go into the building,” says Boyer. “So it will have a green roof, a solar pavilion, geothermal power, composting toilets, all those kinds of things that you would expect from a LEED [Leadership in Energy and Environmental Design] Gold certified building.” Boyer adds that they’re currently thinking of ways to incorporate these sustainability features into their camps.

Starting in spring 2018, the space will not only be able to bring the vegetables from garden to cooking demo, but it will also be able to continue instruction throughout the calendar year (as opposed to just April through October) as well as offer after-school programming and teen internships. Potential after-school partnerships are in the works, but “could be anything from the Boys and Girls Club to the Boy Scouts and Girl Scouts [curricula],” says Boyer, “to maybe help with merit badges or with giving real life pipeline skills to these kids.”

“We’re not trying to necessarily create the next generation of farmers,” Boyer concludes. “We don’t know if that’s how they’ll end up, but we are trying to produce children who are environmentally educated, who are scientifically literate kids, who understand how plants grow, where food comes from and how the agricultural system does work.”