This article appears in Summer 2018: Issue No. 55 of Edible Manhattan. 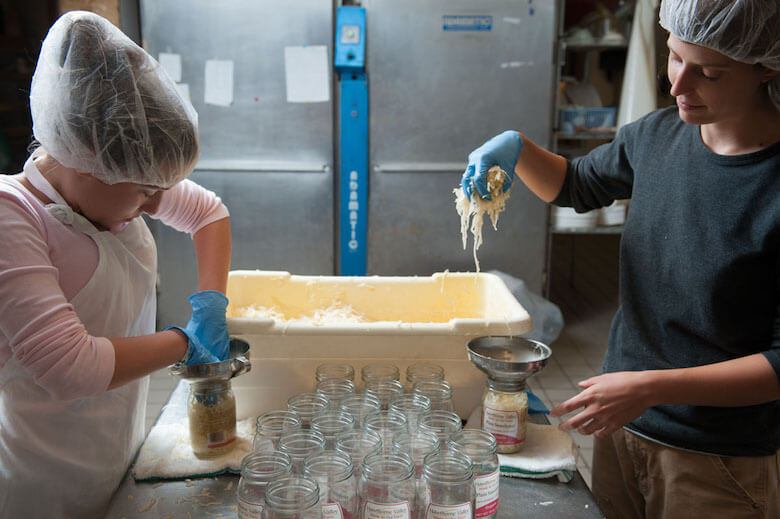 Editor’s note: We’re chronicling how tech is changing the way we eat and drink as we lead up to this fall’s Food Loves Tech. Our annual deep dive into appropriate food and ag technologies returns to Industry City on November 2–3, 2018 and you can get $20 off the regular admission price while our early bird special lasts.

If Hudson Valley Harvest were a just-announced startup, you might think it was heirloom-apple pie in the sky, even with all the right buzzwords. The company gathers local, seasonal, sustainable food from a network of farmers mostly in the Hudson Valley and distributes it to restaurants, stores, corporate dining rooms and universities mostly in the city. Instead of farmers coming to market, it brings the market to buyers.

But it’s the step in between that makes HVH, after going on seven years, look like the future for the local food movement. Every item it brokers, from eggs to butter to sea salt, is traceable, with a label showing exactly where it was produced. If a restaurant menu lists Fledging Crow organic beets, they are guaranteed to be from those fields. In return, farmers know what they are turning over will be traced right back to a payment for them.

And to keep the business thriving year round, in barren snowy season as much as at whoa-too-much-zucchini harvest time, HVH created a huge inventory of both frozen foods, from pork to goat to corn to kale, and “value-added” products, like an applesauce that now has a cult following. Again, everything is traceable: If you pick up a jar of HVH salsa, the label spells out that the organic tomatoes, chilies, onions and garlic it contains were “grown at Hepworth Farms in Milton, New York., and traveled 19 miles to HVH’s plant in Kingston” to be transformed into chip dip. 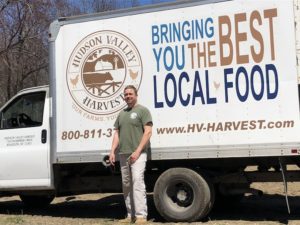 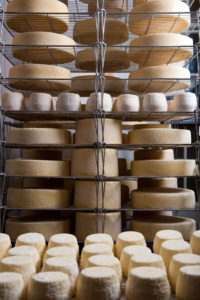 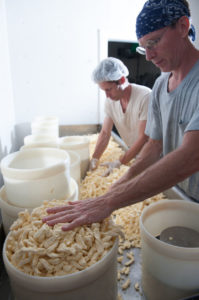 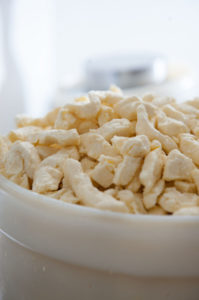 Salted curds being packed into a round mold for cheddar cheese. Hawthorne Valley Farm, Ghent, NY. Photo by Jennifer May. 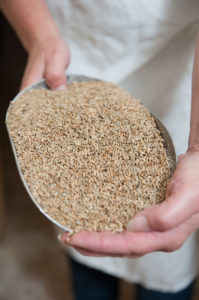 Rye berries about to be milled at the Hawthorne Valley Farm Bakery, Ghent, NY. Photo by Jennifer May. 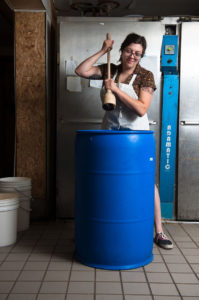 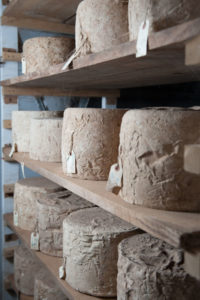 Cloth bound aged raw milk cheddar, made from the milk of cows that live on the farm. Hawthorne Valley Farm, Ghent, NY. Photo by Jennifer May. 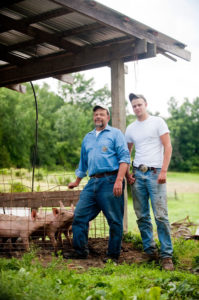 Farmer Richard Biezynski and his son, Russell, at Northwind Farms, where they raise pigs 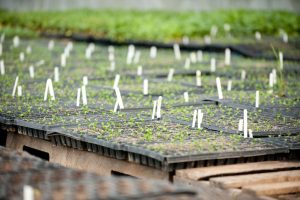 Seedlings in one of the greenhouses at Stoneledge Farm, Leeds, NY. Photo by Jennifer May. 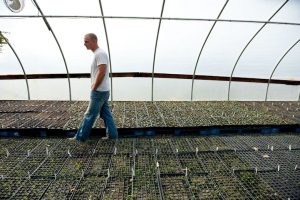 Pete Kavakos, Jr, in one of the greenhouses at Stoneledge Farm, Leeds, NY. Photo by Jennifer May.

Farmers markets originated as a way to eliminate the middleman in the local food chain, but it turns out that that may be exactly the link that has been missing. At a time when individual farmers are competing harder and harder for sales in Greenmarkets and with CSAs, even as demand is growing for local/sustainable foods, HVH is the savvy go-between that gets the apples into Google’s cafeteria, the herbs into Whole Foods. As co-founder Paul Alward says: “We let farmers do what they do best: create food.” HVH does the rest, especially the hardest rest: persuading big buyers that sublime food from tough-tilling farmers is worth a premium.

“The basic issue is, people are expecting more from food,” Alward says. “Flavor is the thing now. People expect it at work and at school. Local wins. People start thinking about how an animal lives, about pollution runoff.”

And they will seek out his products in shops like LifeThyme in Greenwich Village and Westerly Market in Hell’s Kitchen and restaurants like Maysville, City Bakery and abcV near Union Square. 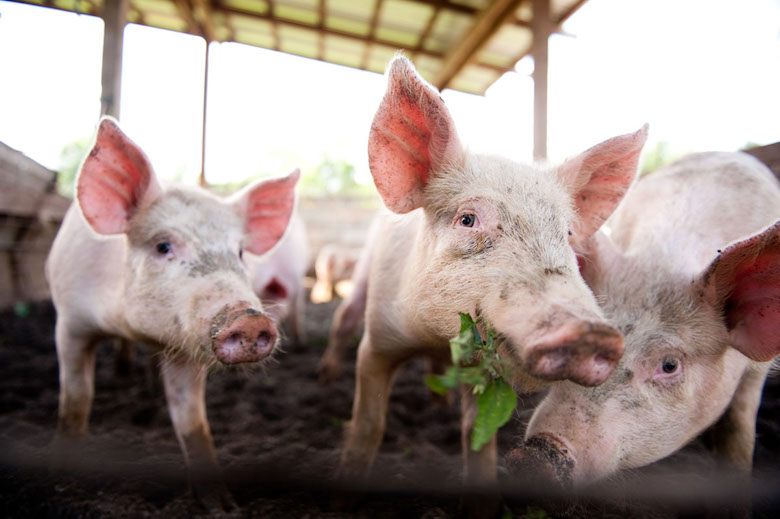 Now that Amazon has bought Whole Foods and is also selling groceries online, Alward sees opportunities for HVH with brick-and-mortar markets. One farmer might have a tough sell; a network draws them in. “Hannaford knows HVH brings people into the store, so they put local stuff at the center of the store. We’re not a regular green bean. We’re local, traceable, sustainable.”

Alward, who grew up on a farm in Massachusetts, was once himself farming 15 acres in New Paltz and selling his organic vegetables and heritage-breed, pasture-raised pork, beef and poultry at a farmers market, in 2011, a rough time after the financial crisis. A good customer who would become HVH’s angel investor suggested “There has to be a better way” to connect the valley’s cornucopia with the 8 million mouths just a couple of hours south. Alward and co-founders Sam Ullman and Joe Katona took over an IBM factory that had been abandoned for 20 years and went to hard work.

From the beginning, the concept was that “everything we do has to be made accessible to three markets: retail, restaurants and institutions” because “there’s a big difference between selling radishes on the corner and selling on a large scale.” The founders went restaurant door to restaurant door to persuade chefs to buy, then, after making deliveries, would go store to store. 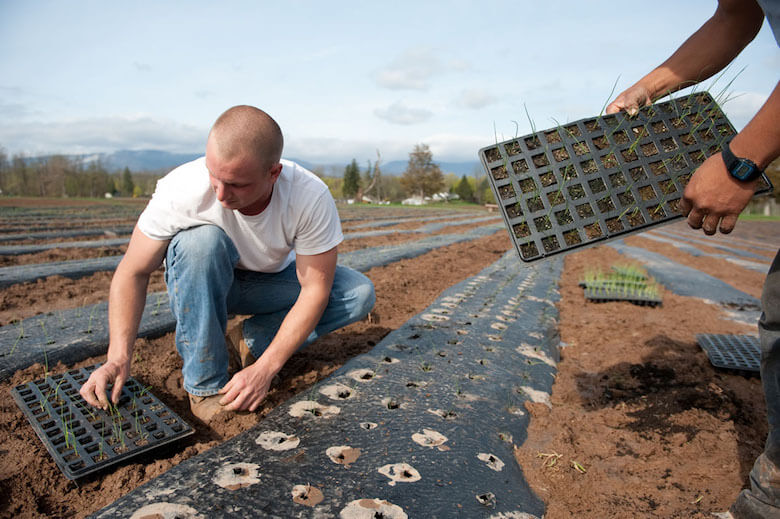 In Manhattan, Alward says, “we got laughed off the island,” because square footage is so pricey, so they kept moving deeper and deeper into gentrifying, immigrant-rich Brooklyn. “Once we were in 15 Associateds, we got into FreshDirect.” That company’s “chief food adventurer” and co-founder David McInerney said HVH was a solid bet because it could provide high-quality, local products with transparency and great flavor all year round.

HVH soon got a contract with the New School, whose dean acknowledged that the products were expensive but vital to students who care about what they eat, how it is raised and by whom. Today HVH supplies 15 colleges and universities, including NYU, as well as businesses like Google, Goldman Sachs and Chase Bank, where food is considered a key amenity. It works with Blue Apron as well.

On a sunny day last August, the walk-ins at HVH were packed with fresh vegetables, cartons of eggs, butter, cheese and more; the meat freezers were bulging with beef, pork and poultry. Huge racks in another room held dry goods like local flour, beans, maple syrup, honey and sunflower oil. A whiteboard near the walk-ins listed all the products trucked in from farms that day; from it a master list is made available to customers. (The HVH bounty is also available online to individuals, with orders to be picked up at the Kingston headquarters or shipped.) Alward now works with 60 farms, conventional and organic, ranging from a few acres to a thousand. Or, he says wryly: “We have the problems of any farm times 60.”

At a time when individual farmers are competing harder and harder for sales in Greenmarkets and with CSAs, even as demand is growing for local/sustainable foods, HVH is the savvy go-between that gets the apples into Google’s cafeteria, the herbs into Whole Foods.

HVH also encourages farmers to maximize their contributions. Soil celebrity Ray Bradley, who sells tomatoes and pork through the company, now raises duck eggs; a beekeeper now has hives on a number of farms. Alward also searches out products like the black walnuts he found a 95-year-old farmer harvesting near Niagara Falls.

Farmers who network with HVH can also sell in farmers markets, as Bradley and Greenmarket mainstay Locust Grove do. And if a farmer needs to buy back products to stock his own farm stand or market stall he can. HVH works on a seniority system and has a waiting list to join, Alward says.

John Altobelli, whose huge farm in Valatie, New York., produces much of the sweeter-than-Greenmarket corn HVH distributes, says the arrangement allows him to grow on a large scale without compromising his standards. “I’m not a Hunts Point guy,” he says, referring to the huge wholesale market in the Bronx, but he also recognizes that “in two lifetimes I could never get into the Friday Greenmarket at Union Square.” 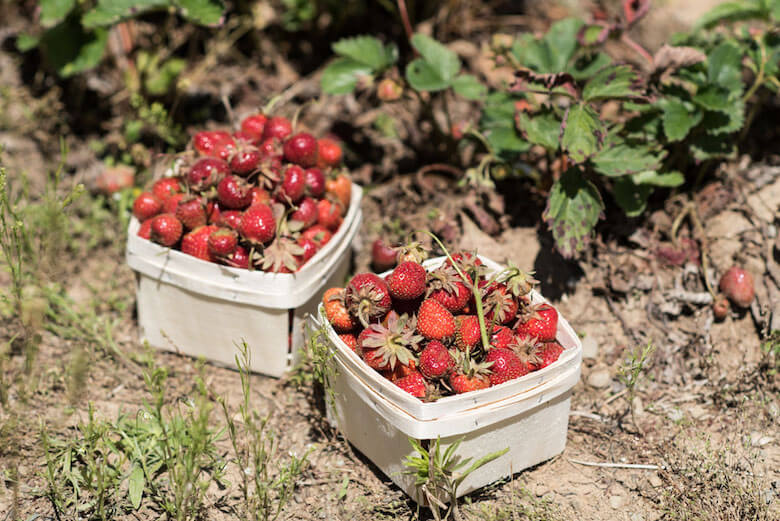 Beyond the financial boost for farmers, Alward notes that the true-green enterprise has had a huge impact on the local economy.

Similarly, Lisa Buhrmaster of Blackhorse farm in Coxsackie, New York, said teaming up with HVH has enabled her to get her crops, ranging seasonally from blueberries to pumpkins, into markets much farther afield. The partnership also motivates her to experiment with less familiar produce, like okra and kohlrabi, because demand always exceeds supply with this business model, where kale can go from supermodel to cliché before you can say avocado toast.

Joyce Henion of Acorn Hill Farm in Walker Valley, New York, is also thrilled her goat cheeses are on tables in restaurants she would have had no way to get into. But she also notes that not having to schlep to farmers markets gives her much more time and energy to do what she likes best: Raise goats. Make cheese.

Beyond the financial boost for farmers, Alward notes that the true-green enterprise has had a huge impact on the local economy. Fifty workers staff the main plant and keep trucks on the road; the Hilltown slaughterhouse nearby has added shifts to keep up with demand for meats and sausages.

Alward admits he is well aware of competition from all sides, not just from larger distributors like Baldor that do all they can to incorporate local products into their systems but also from “many others who ‘greenwash’ their offerings to market ‘local’ but do very little to support regional farms.” Shorter? The website may say local. The deets go missing. HVH fills them all in.

HVH, after going on seven years, look like the future for the local food movementPhotos courtesy of Damon Jacoby, Jen May and Hudson Valley Harvest.