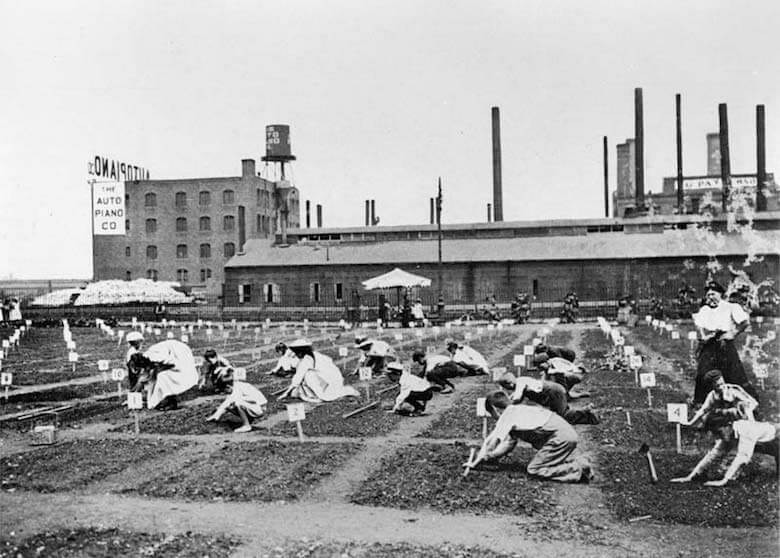 These photos of city kids farming recently caught our eye on the the New York City Department of Parks & Recreation’s website. As we learned from this post (that they kindly gave us permission to share), kids tended plots throughout city parks for over half of the 20th century and well before Edible Schoolyard NYC, Slow Food NYC, City Growers and other similar food education nonprofits started their important work. While the city’s ag scene has significantly grown and evolved since the Parks Department published the following, their post reveals a similar, dare we say timeless, local enthusiasm for growing things.

Although the era of social reform in the early 20th century was still driven by government and charitable organizations, in many ways farm gardens were early manifestations of a community gardening aesthetic. The first farm gardens in New York City appeared in 1902 in De Witt Clinton Park [and] shepherded by a “Mrs. Henry G. Parsons,” who despite the seeming formality, in fact broke ground as a woman and went on to become one of the first senior-level park administrators.

Frances (Fannie) Griscom Parsons (1850–1923) was born in New York City to a reform-minded family; her father John Hoskins Griscom was first tenement house reformer in the city and her grandfather John Griscom established the first city high school and first institution for juvenile delinquents. Fannie Parsons also served on her local school board from 1902 to 1906—again, perhaps one of the first women to do so.

Parsons, who had seven children of her own, educated her children in the techniques of cultivating vegetables and believed that it should be part of the education of all children. But while the Parsons family was fortunate to be able to escape to the country each summer to teach the children these skills, Mrs. Parsons recognized that not all families had this luxury. Thus, she decided to bring the idea to the city and opened the first farm garden on the west side of Manhattan, near tenements that dominated the neighborhood at the time. Personally overseeing the project for many years, Parsons commandeered three-quarters of an acre of De Witt Clinton Park for 360 plots that functioned as miniature gardens. 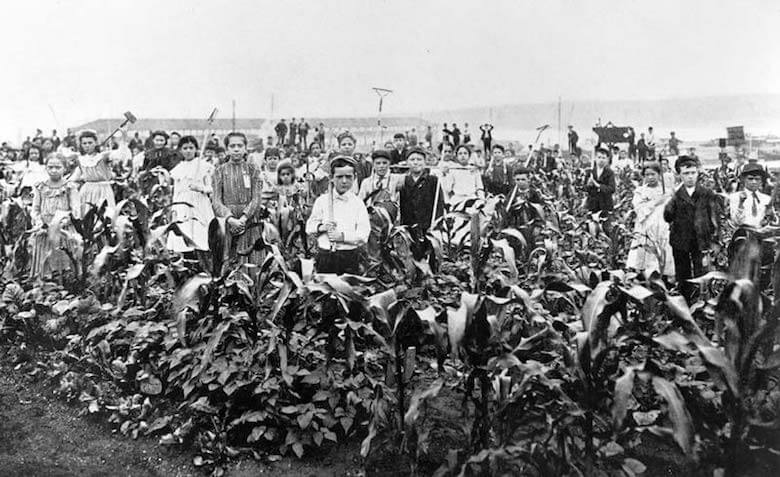 Children take a break from their work at De Witt Clinton Farm Garden to pose for a photo, circa 1902. Source: 1902 Parks Department Annual Report.

The playground movement was still in its early stages at this time and Parsons believed that children got into trouble when there was no place to play. With this concern in mind, Parsons convinced Parks Commissioner William R. Willcox and Mayor Seth Low, both reform-minded officials who also supported the fledgling playground movement, to back the project. Amenable to the idea, especially in the way it helped change children’s behavior, Commissioner Willcox noted in 1903, “Older persons who live thereabout declare they can see a decided difference in the courtesy and general conduct of the youngsters since the plan was first adopted.” 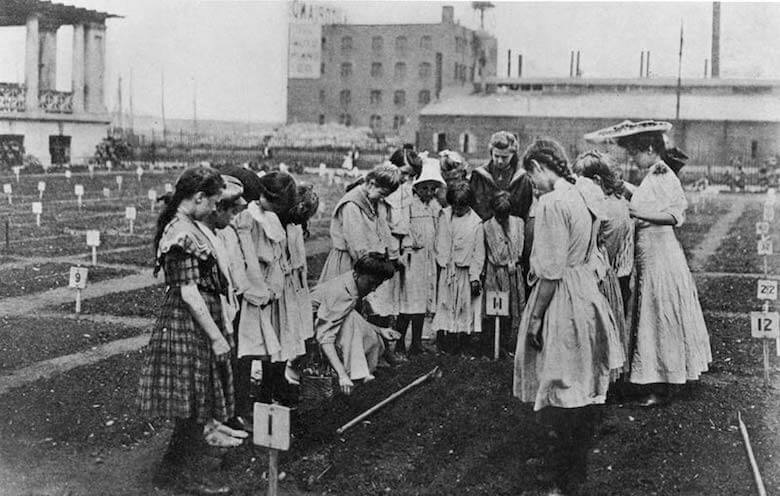 A class, mostly of girls, carefully observes its teacher during a lesson, circa 1905. Source: Parks Department 1905 Annual Report.

In the farm gardens, children from nine to 12 years of age cultivated plants and flowers. Crops included corn, beets, beans, peas, turnips, lettuce, spinach, cabbage, celery and radishes. Additionally, an 11- by 18-foot farmhouse was constructed where girls were taught house chores and boys learned outdoor tasks. The program also showed participants the proper way to cook their harvest. Parsons proudly noted that girls were taught how to farm right alongside boys, a fundamental part of farm garden education. Both boys and girls kept diaries and tracked the progress of their vegetables through the growing season.

For Parsons, the social benefits followed. “So in the first place the children are taught economy of space,” Parsons explained, “Economy of other things follows. We teach them honesty in their work, neatness and order, justice as well as kindness to their neighbors. I assure you that all the virtues can be taught from a little patch of ground not eight feet square.”

By 1908, the Board of Education took up the idea for its curriculum, and farm gardens run by schools had spread to 80 locations across the city (a farm garden curriculum has been revived by Brooklyn’s PS 140 at Highland Park on the Brooklyn-Queens border; see below).

Early in the program’s beginnings, Parsons claimed there was a waiting list of several hundred children. “Such work as this for the children of our city is the truest reform work I know of,” she noted in 1905. “The contact with nature, the learning to use her ways for himself is a wonderful educator for the street boy, whose knowledge is limited to stone pavements and one small room in a tenement house.”

Reaping the Fruits of the “Farm” 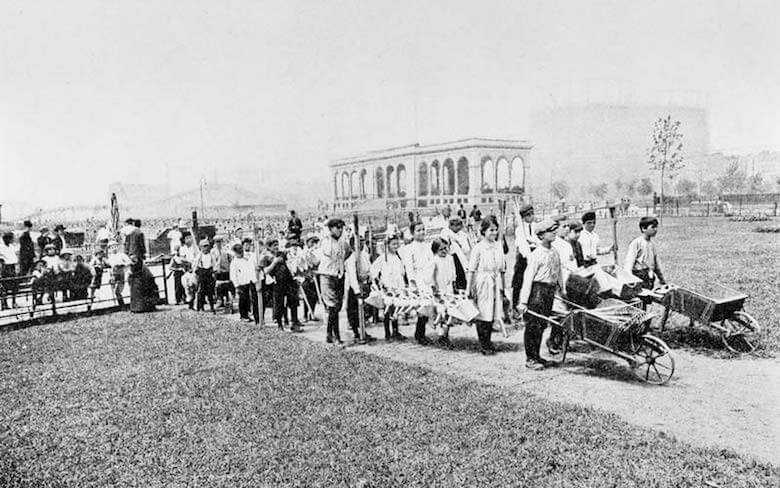 The farm garden at De Witt Clinton Park lasted until 1932 when construction on the West Side Highway cut into the park’s boundaries. Meanwhile, other sites flourished: a two-acre farm garden at Thomas Jefferson Park in East Harlem was built in 1911, providing over 1,000 plots that went through two growing cycles each summer. A three-quarter acre garden at Corlears Hook on Manhattan’s Lower East Side opened in 1913, featuring signs in both English and Yiddish. In Brooklyn, sites included McCarren Park (1914) and Betsy Head Park (1915); 715 plots in each served 1,430 children. The 1915 Annual Report noted that the average yield was “400 radishes, 2 quarts of beans, 5 ears of corn, 40 beets, 1 peck of beet greens, 60 carrots, 15 heads of lettuce and 20 turnips”—quite a haul, and a profitable one, too: Statistics in 1918 for the school gardens showed 3,565 children earning a $4 yield of food. 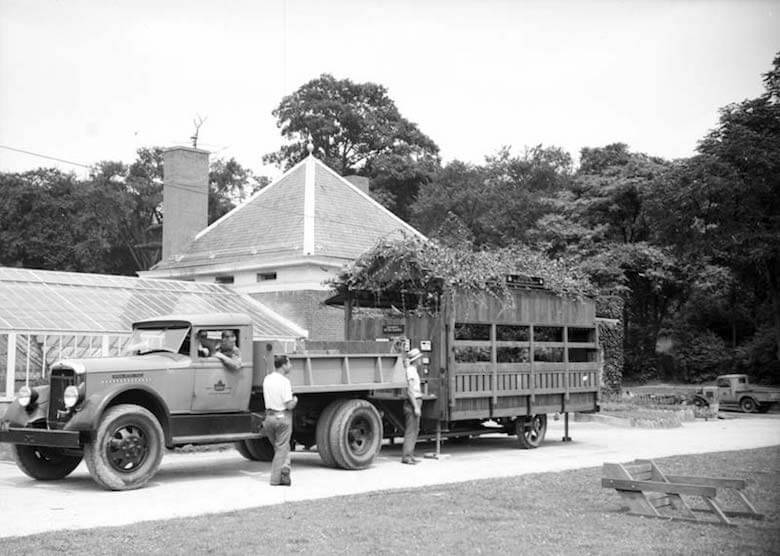 July 2, 1936 image of the Traveling Garden “on the go,” ready for its next educational trip. Photo: Max Ulrich, courtesy of Parks Photo Archive.

Parks Commissioner Robert Moses expanded on the concept, promoting farm gardens as a “Bit of Country in the City,” and opened the Highland Park Model Garden (in 1989, school groups revived the garden; see Tales of Gardening Greatness for details). The practical-minded Moses administration boasted of growing “plants of economic interest” such as cotton, peanuts, flax, wheat, Indian corn and “old–fashioned herbs” at Fort Greene Park in Brooklyn and debuted the “Traveling Garden,” a six-ton, 17-foot-long trellis-covered trailer that parked at playgrounds across the city for a few days at a time. The Traveling Garden exhibited 100 different plant samples,  including corn and beans in varying stages of growth; animals, including a cow, calf, pigs, ducks, chickens, turkeys and pigeons; and a poison ivy exhibit in a special glass enclosure: “Know it when you see it —notice the three leaves… Fingers Three Turn and Flee.” Always up for a competition, the Moses administration awarded children medals at harvest time for the best vegetables. By 1950, there were nine farm gardens in city parks and farm gardens lasted in parks until at least the 1960s, when there were 894 plots in six parks. 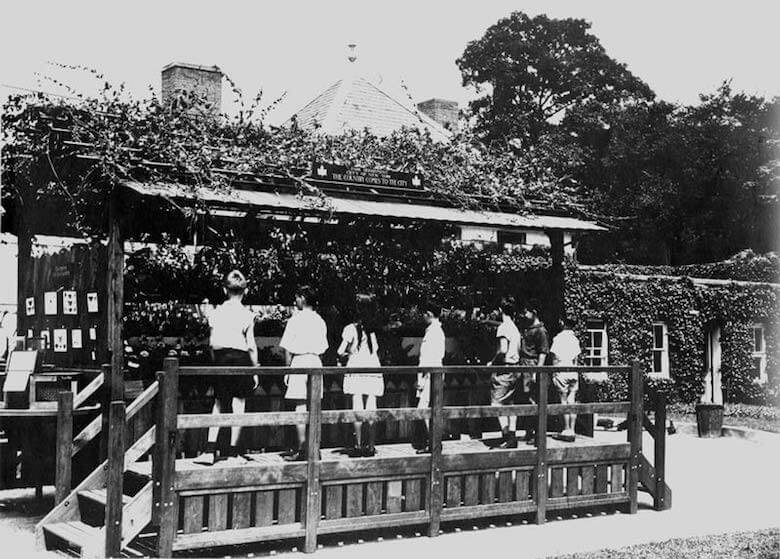 July 2, 1936 image of the Traveling Garden “unpacked” for children to use. Courtesy of Parks Photo Archive.

Although children’s farm gardens lasted into the 1960s, the idea fell out of fashion in the 1970s and 1980s, as agriculture became more removed from the daily lives of city dwellers. But thanks to an increased awareness of where and how we get food in a global economy, and the rise of the “locavore” and organic movement, not to mention the increase of farmers markets around the city, of which there are more than a dozen in city parks, the idea reemerged in 2001 at the Red Hook Community Farm in Brooklyn. The group Added Value converted concrete ball courts at Coffey Park to work with local youths to grow crops such as lettuce, eggplant and squash.