See What’s at the Union Square Greenmarket with This App

Free for both iPhone and Android users, the app is updated each market day morning.

Like these black totes? Donate $100 to GrowNYC this holiday season and we'll send you one as our thank you! www.grownyc.org/donate

If you’re like me, going to the farmers market evokes a feeling that lies somewhere between Christmas morning and Black Friday shopping. Fortunately, GrowNYC kept shoppers like me in mind when they debuted their Union Square Greenmarket app nearly two seasons ago. The app, free to both iPhone and Android users, is updated each morning with the market’s available items to quell some of the anticipation of shopping blind. 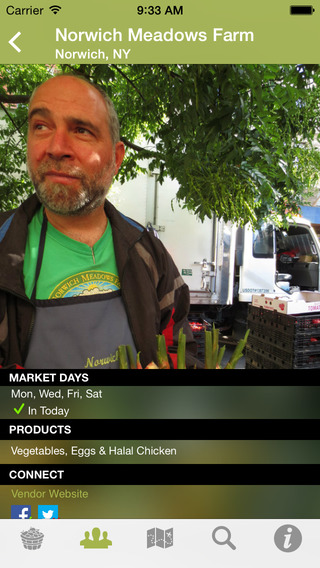 The app is bare bones, making it easy to use in its current iteration. When you open the app, you’re greeted with a colorful array of photos featuring peak/in-season items with a simple check or “X” mark to indicate their availability. You can further sort by fruits, vegetables, dairy, baked goods, meat, fish and seafood, pantry items, alcohol and plants; view a list of vendors currently selling; and peruse a bird’s-eye map of the market to plan your visit.

The app is still in progress besides these simple features. Laura McDonald, communications specialist with GrowNYC, says that building out more features requires more work than the nonprofit can support for now. “We’re focusing on keeping the app up and running,” she says after noting that the app is updated each morning by market managers on the ground, who have an array of responsibilities beyond being part-time web developers to ensure the market is open on time for shoppers. When asked about recipes or shopping lists like the ones featured at the GrowNYC table at each market, McDonald says that these and other ideas, such as rolling it out across some of the other markets in the five boroughs, are on the horizon. That horizon is as far as the nearest avocado tree, however.

Even still, the app is popular among your average shopper who appreciates knowing what’s at the market. Feedback, according to McDonald, has been both helpful and encouraging. The city’s chefs have mixed feelings, though. Assuming these busy culinary minds would relish in an app that saved them precious prep and cook time by planning their visit, McDonald was surprised to hear that some chefs prefer not to look at the app. Instead they prefer their traditional market in-person browsing experience as it tends to get their creative wheels turning.

You can subscribe the the GrowNYC Greenmarket newsletter for seasonal recipe recommendations.