You Say October, We Say Goatober: Our Editors’ Thoughts on Why You Should Eat More Goat

Goat meat is the most popular protein around the world. But in the US, we rarely eat it. For several reasons, we want to change that.

Did you know that goat meat is in fact the most popular protein around the world? It’s a lean, nutritious source of meat and has a lower carbon footprint than beef, pork and lamb. But in the US, we rarely eat it. If we’re all having a hard time imagining a cheese plate without goat cheese, we don’t feel like something is missing when there’s no goat meat on the menu.

However, there’s no goat cheese without goat meat. In order to produce milk, a female goat has to have babies. Typically, goats are born as a set of twins — one male, one female. Thus, for every female used for dairy, there’s a male left. Most males in the US get killed at birth because there’s no demand for them and it gets therefore too expensive to raise them.

How can we change this? Our editors have some ideas:

Gabrielle Langholtz
Of all the headlines I’ve written in my decade at Edible, I’m most proud of the one I typed across our op-ed(ible) about the glut of boy goats born on milk dairies: Billy the Kid: Not Wanted Dead or Alive. But when it comes to spreading the goat-meat gospel, I hadn’t expected the staid Economist to beat my wit. Their great little piece observing the recent rise in demand — and the potential for way more — bested my pun. “The Kids are All Right,” they called it. Nice. Plus, being The Economist, they cite stats. Like, “From 1987 to January 2013 the number of meat goats on American farms rose from roughly 415,000 to 2.3m.” I’ll chew on that while tucking into some tender goat chops this weekend. Because, as The Economist so rightly explained, “a young cabrito has a clean, grassy, herbal flavour, sweeter and less greasy than beef.” Such reporting should help convery the neigh-sayers. (Couldn’t help it.)

Eileen M. Duffy
#Goatober is a new one on me, but on the East End, we’ve been writing about goats pretty much since the start of the magazine in 2005. In spring 2006 I visited Karen Catapano, who was one of the first livestock farmers on the North Fork and definitely the first person to raise goats to make cheese. Lucky for me, it was just after the birth of that year’s kids. They were so soft and sweet and Karen loved them. In 2010, I got to meet Lynn Fleming, owner of Lynnhaven goat farm upstate, who was at the old Almond space in western Bridgehampton for a goat dinner sponsored by Slow Food. Chef Jason Weiner made a full goat menu. Fleming was so lovely, and the photo she sent, taken by a worker on the farm, is so expressive of her love for her kids. 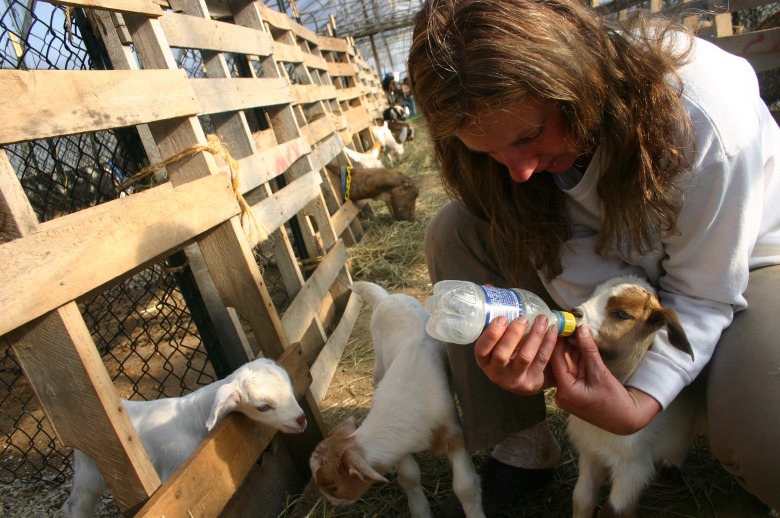 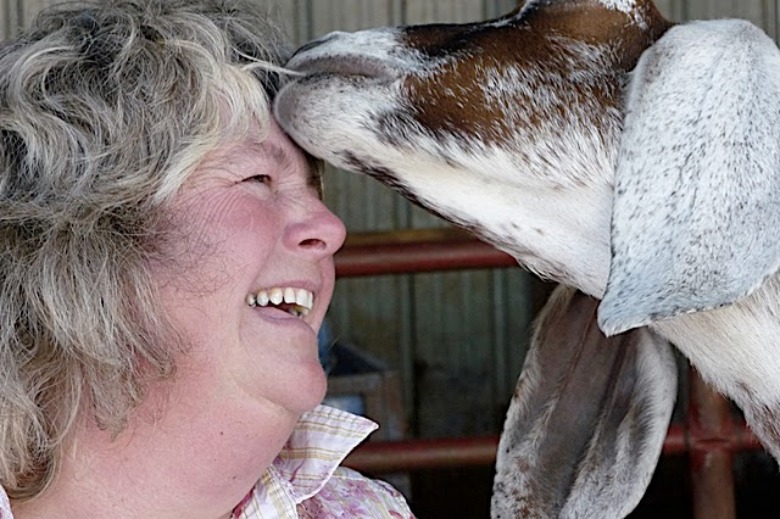 Eleonore Buschinger
To be honest, I had never eaten goat meat until last week. Tons of delicate goat cheese but no goat meat. I hadn’t actually even realized the fact that there’s no goat cheese without goat meat. In fact, in order to produce milk, a female goat has to have babies. Typically, goats are born as a set of twins – one male, one female. Thus, for every female used for dairy, there’s a male left. This simple but decisive detail was like an epiphany to me: I had to try goat meat. So I went to Trinidad Ali’s Roti Shop in Brooklyn and got a goat roti. The meat was absolutely gorgeous, stewed in a variety of spices with a strong taste of cloves. Next goat adventure: try this roasted goat leg recipe. It’sgoatta be good!

Carrington Morris: The Growing Demand for Goat Meat, The Atlantic
This article points to the beginning of goat meat’s gradual integration into American diets. Described as the “soccer of meat” for its wild popularity in all countries but ours, as with soccer that status has been changing fast. This dream meat is “lower in fat than chicken and higher in protein than beef,” and craggy Northeast terrain is particularly well suited to raising goats. The best goat meat in town I’ve found comes from Consider Bardwell‘s stand at the Union Square Greenmarket, where this time of year, if you’re lucky, you can pick up a goat chop from their limited supply in a cooler beneath their regular cheese stand.