We talked to Food + Tech Connect founder Danielle Gould about Edible Institute and why there’s hope at the intersection of food and tech. 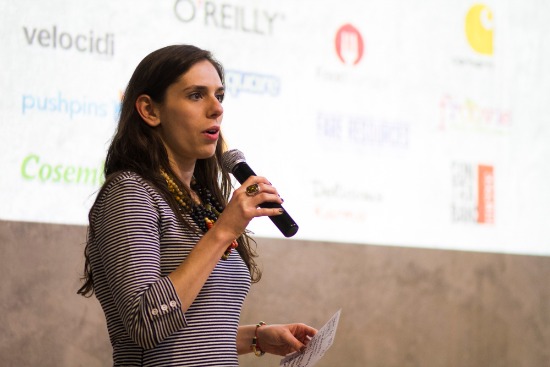 Once, Food + Tech Connect founder Danielle Gould thought that the food world “wasn’t for me.” Now, she’s at the helm of one of the most exciting food-oriented organizations we know of, and will be speaking about the intersection of technology and food at Edible Institute on May 10. We talked to her about how she got started, where she thinks the food world is headed, and the important role technology can — and will — play in the future.

Edible Manhattan: What speaker or session of the Edible Institute lineup looks particularly interesting to you?
Danielle Gould: I’m excited to hear Anna Lappé speak, and Mark Bittman. So much of what I love about Institute is being able to sit and immerse myself… Edible brings together some really diverse perspectives.

EM: What topic or conversation stands out to you as powerful?
DG: Sustainable seafood is very near and dear to my heart. I don’t eat fish out a lot because I can’t trust it.

EM: How did you get involved in food?
DG: When I was working at Brightfarms, Twitter was this eye-opener for me. I started thinking, what if you could create a smart grid for food? A smart grid is an energy system for cities that takes all these signals from the city and connects them in order to make things more efficient — energy, water, everything becomes more efficient.

My background is in environmental studies and technology, and people thought that was weird but they’re both all about systems. That’s why I love the internet — it’s possible to connect it all.

EM: Where is the food world headed?
DG: I think food is going to get smarter — it’ll be better for our health, and better for the planet. For food to be smarter, it’s optimized. You can optimize what you’re planting, you know what the consumer demand is and you can grow for that demand rather than a shot in the dark. You’re also able to work with other farms and make sure, to hedge even better against issues like pests and weather issues. You’ll be able to better plan for that. And then better distribution and marketing. And you’ll be able to do that because you’ll have better data. Imagine a world where you have sensors collecting data so you’re automatically measuring moisture of the soil, be told if there are any pests detected, being informed by other farms of issues coming up. Just using information to optimize planning, growing, marketing and distribution. […]

Look at what’s going on in healthcare — that’s where we’ll be in a couple of years. The idea that all of your records are available, and any doctor can access all of your records, and everything that goes on in a hospital is all digitized so you’re able to trace things before they’re happening. You have a more integrated, holistic picture of who your patients are: the food that they’re eating, their sleep and exercise patterns, how frequently they go to the doctor. And once you have that, you have personalized medicine. The same thing can happen for food.

We have a whole new generation of farmers, but we also farmers who don’t have money to farm anymore or don’t have anyone to pass their farms onto — and so, with them, we’re losing a lot of information. But the climates are also changing. People don’t know how to optimize their growing anymore, because everything is different now. And we also have these new farmers who don’t have that wealth of knowledge. So we can take information and digitize it, and then make that information available in real-time to farmers in their specific regions. And it already happens in controlled environments, like greenhouses. You give plants food and water based on what the needs are. I think that’s partially what the future looks like. And that enables people to be sustainable too, because people don’t have to put in as many fertilizers and that sort of thing. I’m very optimistic about our future.

EM: Some people are nervous about technology coming into contact with food — they think of GMOs.
DG: I think a lot of people averse to technology. When you hear about technology in food, you automatically think of Monsanto. Dupont. But this new technology is different: it’s not technology for the sake of technology. We have a deep understanding of the users’ needs. The technology is really developed to solve problems, versus using the newest, flashiest technology. It’s not just social media for the sake of social media —it’s because it helps you communicate and building a brand. We’re focused on really solving people’s problems. And a lot of the time it’s just taking something that people are doing manually and automating it, making it easier. So something you were previously doing on pen and paper, you can capture with your smartphone — and then you have automatic records. It actually helps get us closer to where we want to be. It’s how to network  —that’s what technology is doing.

EM: What are some of your favorite places to go in New York?
DG: I love going to the park — Central Park and Prospect Park. My absolute favorite ritual is going to the Grand Army Plaza farmers market on Saturdays. I always feel so inspired. My life has been pretty crazy so I haven’t been cooking much over the past couple of years, but then I moved to Crown Heights and the market got me cooking again. It’s been wonderful. I also love Lincoln Center and Grand Central. They’re just gorgeous buildings — they’re magnificent. You feel very small, and I like watching people there.

Empellón Taqueria is amazing. So is Northern Spy. He [the chef, Christophe Hille] is fantastic. I also just love Gotham West Market. It’s so awesome — like nothing I’ve ever seen. It’s so beautiful. In my neighborhood, my go-to place is Mayfield, which I like a lot. Then there’s Nixtamal — it’s in Corona. I think it’s the only place in the five boroughs that makes their own masa. And Han Dynasty has great gluten-free beer!