The lifelong New Yorker has just published a book about Balthazar, which is now celebrating its 20th anniversary. 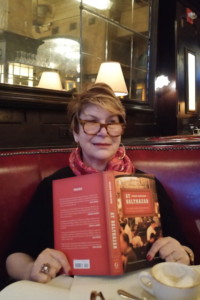 We all have our favorite restaurants, but few of us spend years and years of our lives writing books about them. Writer Reggie Nadelson went that extra mile in her ode to and look inside of Keith McNally’s seminal Soho spot Balthazar in At Balthazar: The New York Brasserie at the Center of the World, out today to mark the 20th anniversary of the restaurant this month.

For Nadelson—a journalist and crime novelist—getting into the kitchen with executive chef Shane McBride (who contributed recipes) was a dream come true; for those of us a bit jaded by access to these spaces, her writing bubbles like Champagne (and also has the perfect amount of dry humor). The book is an infectious joy to read, a reminder of the magic restaurants make on a daily basis and exactly how many people contribute.

The lifelong New Yorker grew up in Greenwich Village and jokes that her mother’s preferred dish was “reservations.” “I certainly didn’t have a mother who was simmering oxtail stew on the stove,” she says. “I was born in restaurants. Even when I was a tiny kid, we went out—not to grand restaurants, but we always went to pizza places and diners. Everybody in New York goes out, because nobody has that much space.”

Even being given a dream assignment for Departures to take cooking lessons from famous chefs didn’t woo her into the kitchen. “Of course, they didn’t teach me, because I didn’t really learn,” she cracks.

It’s convenient, then, that she lives around the block from Balthazar, her daily breakfast haunt. “I feel that everybody in New York City needs a local—a pub, a diner, a café, a joint, anything—some place to hang out,” she says, “because it’s an anonymous thing, being in a big city, and that’s where people get their communities.”

She also writes about the community that exists in the back of house and, as we sat in one of the restaurant’s big red booths, relayed the story of one man in the kitchen. “There’s one sous chef, Frank, who came at 17 from Mexico—he taught himself English. He talked about how he made his way up, and I said, ‘Do you have kids?’” she recounts. “‘Yes, my daughter is about to start her Ph.D. in art history at Columbia.’ When he first came he was married, but his wife died in childbirth. Not only did he learn English and get himself through the system, but he raised this daughter. You see everything in a restaurant. If Donald Trump thinks New Yorkers won’t protect people who may or may not be undocumented, he better think twice.”

Though Balthazar is her clear number one, she doesn’t eat her every meal there. We got her to tell us about her other favorite restaurants in the city.

Fanelli Café
It’s the old bar on the corner of Prince Street. It’s the last surviving place in Soho. You don’t go for the food—the hamburgers are fine, the tuna salad’s fine, but the people are marvelous and they’ve started opening for late breakfast.

Aquagrill
The thing I love—I mean, I like fish and I love seafood—but the thing I love about it is there are so few chef-owners and they really own the restaurant and run it. As very grand restaurants become chains, in a sense, it’s kind of nice to know who’s cooking.

Morandi
It’s kind of out of the McNally thing, because it’s Italian, and they’re open for breakfast. If you go either on a weekend or during the week, they do wonderful frittatas. It’s very laid-back.

Molyvos
It’s especially nice to go there if you’re going to the theater to have a martini with some insanely delicious octopus and stuff like that. I really like sushi and raw fish a lot.

#brunch #vibes … this could be you at high noon. Let the Lazy Susan's do the work (thanks @therealkeanureeves building them) @taiwanbeersg 📷 @patriciaylee #taiwan #brooklyn

Win Son
It’s sensational. We never really think about Taiwanese food—which is supposed to be the great cuisine.

We love to incorporate classic foods from our appetizing shop into dishes at our restaurants. New on the menu at Russ & Daughters Cafe: we make our own granola and jam with dried fruit from our legendary counter. Served with yogurt and fresh fruit. Enjoy it with our Fig Shrub, which we make from figs, balsamic vinegar, fennel seed, coriander, allspice, garnished with a dried fig from Russ & Daughters and an orange slice. #AppetizingSince1914 #RussAndDaughters

Russ & Daughters Café
My father knew the original Mr. Russ. We’ve known all the generations, and it’s nice not to sit outside and eat your bagels now.