Where We’re Eating and Drinking This Week

The number of options can sometimes be overwhelming in New York, so that’s why we’re here. Yes, biscuits and beer are involved.

Need some guidance on where you should go out this week? Including biscuits, beer and cheese plates, here’s where our editors recommend:

Carrington Morris: BeeHive Oven
Winter’s equivalent of an oasis in the desert, South Williamsburg’s BeeHive Oven will warm your heart, belly and toes with hot biscuit sandwiches, chicken fried steak, potpies, mashed potatoes, ‘CinnaBiscuits’ and more. While the Moselle (fried chicken, sautéed collard greens, fried egg and hot sauce on a biscuit) is practically a home-teleportation device, so far everything from these ICE-trained Texas transplants — who some may remember from their Smorgasburg days — is exceptional. Housemade jam and bags of biscuits are available to go and via Good Eggs, and Sunday suppers are rumored to be coming soon.

Caroline Lange: 61 Local
I first visited 61 Local over the summer, while I was working down the street at Van Leeuwen, and I have been smitten since. I think of them more as a beer bar (with an impressive and tasty roster of local beers, like Singlecut Beersmith and KelSo), but they’re open early, too, so you can go for a breakfast of coffee and pastries from four-blocks-away Bien Cuit; or for lunch with ingredients from Local Roots. 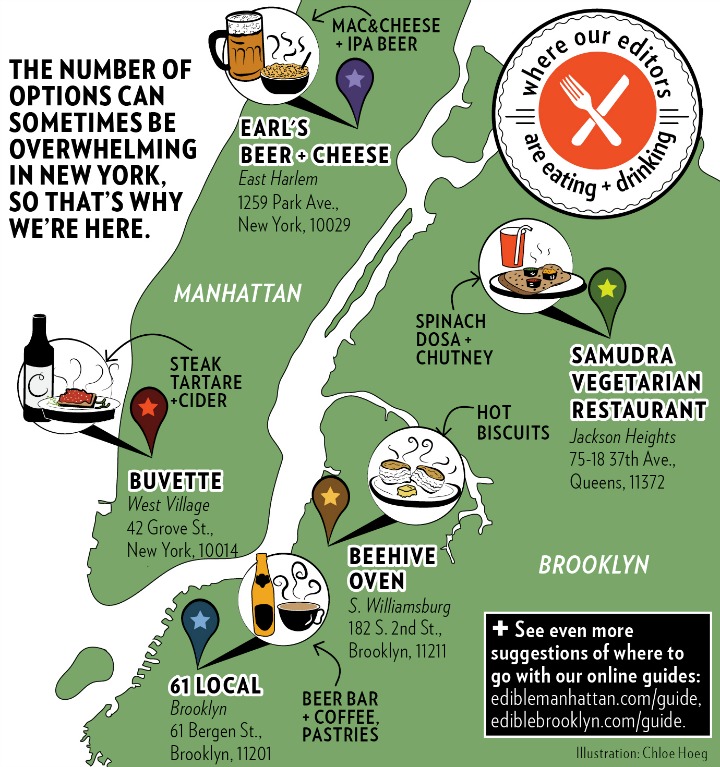 Gabrielle Langholtz: Earl’s Beer and Cheese
When cold winds howl and night falls at 4:30, I’m less likely to fancy a kale salad. Instead a recent evening found me in East Harlem and I made my windswept way back to the tiny storefront beacon of Earl’s Beer & Cheese. The aptly-named eatery’s menu includes the likes of beer cheese, blue cheese grilled cheese and mac and cheese but I went for the NYS cheddar cheese, tricked out with kimchi, pork belly and a fried egg, which warmed me happily from the inside out. I washed it down with a Big Bear IPA and still found room for a kale salad after all. Upshot: Killer. Go.

Eleonore Buschinger: Samudra Restaurant
When I was back in Europe for the summer, missing New York and thinking about the first thing I would eat when coming back, I wasn’t craving bagels, pizzas or burgers. I was craving Indian food. But not any kind of Indian food — it was the food served in Jackson Heights at Samudra Vegetarian Restaurant. Ironically enough, Samudra means “ocean” in Hindi and the fact that there was an ocean between me and them over the summer was actually painful. The texture of their dosas is absolutely perfect and their curries are divine. Anything on the menu is delicious but I often get their lentil doughnuts, onion fritters, spinach dosa and Baigan Bhartha (roasted eggplant with onions, garlic and spices). After that, I’m usually drowning in that same ocean.

Lauren Wilson: Buvette
Before I had eaten at Buvette, I had seen their wood-type letterpress signage on the blog of my neighborhood print shop. Apparently the staff had had a day at the press to create some unique promo material, and in doing so, they stole my sucker-for-anything-handmade heart. This appreciation of quality and process extends to their West Village gastrothèque. They serve a Parisian bistro-inspired menu all day long with the finest, freshest ingredients from both the Northeast and France. I came for the cider and cheese and wish I had had enough room to stay for the cassoulet and steak tartare. I shall return.