This Collective Wants to Reinvent the Modern Dinner Club

Is it possible for an exclusive gathering to resemble a community more than a club? Tasting Collective thinks so. 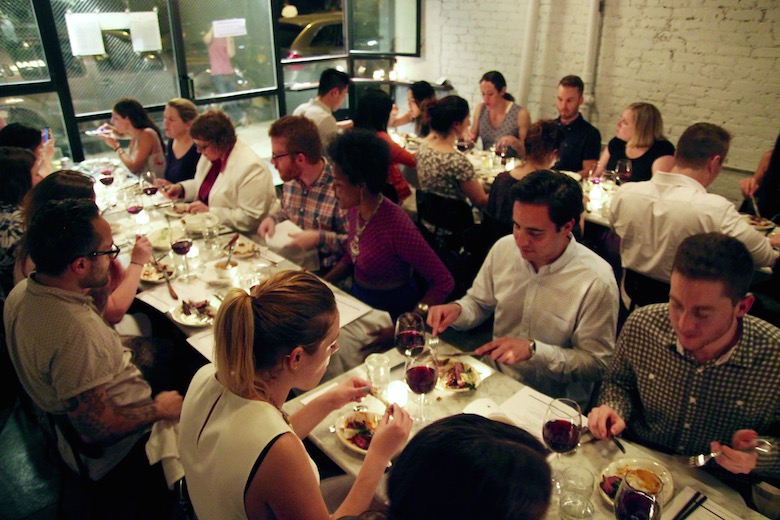 By placing emphasis on people’s relationship to food rather than just the food itself, Gelb hopes to inspire curiosity and a greater appreciation for ingredients and their provenance. Photo courtesy of Tasting Collective.

Nat Gelb wants to turn every meal into a feast. He also thinks that feast should be as good for you as the chef who makes it. The tech- turned food-entrepreneur, who hails from New York’s Hudson Valley, founded Tasting Collective to do just that.

A Food-X graduate and former director of development for FoundersCard, Gelb combined his desire to connect and support fellow entrepreneurs with a love of good food. He has spent the past year running a series of small private dining events in critically-acclaimed, mostly farm-to-table restaurants around the city. However unlike other private dining models Tasting Collective aims to be more dining community than dining club.

This is the domain of the interactive eater. Here, “the chefs are the entertainers.” Each one-off event is curated by the restaurants themselves, not the Collective. Using space and ingredients at the host’s disposal, the chefs host the party; Gelb brings the guests.

Diners and chefs convene to celebrate the food together. Conversation is encouraged to take place throughout the event and often ranges from speaking about relationships with food to the inspiration behind each dish. Every experience is different. As a result while a “feast” may take place at celebrated restaurants such as Franny’s for example, the menu — prepared by the restaurant’s head chef using the same quality fare — tells a new story each time it’s told.

The appeal of such a business model is three-fold: restaurants can market their talent and cuisine through guaranteed covers, chefs are provided with a platform to take their creativity off-piste and diners experience new dishes, new people and quality fare at a discount. Six to nine courses of family-style cuisine or a convivial buffet (including drinks) will typically set the Collective eater back $45—55 depending on the venue. However, despite the low price-ta,g each event is designed to feel and be exclusive. As a result top restaurants can continue to cultivate their caché while supporting a universal model that’s accessible to all. Similarly, particularly in cities like NYC where real-estate is at a premium, Tasting Collective provides a lifeline to small or fledgling businesses by guaranteeing a set of covers on Collective evenings.

By placing emphasis on people’s relationship to food rather than just the food by itself, Gelb hopes to inspire curiosity and a greater appreciation for ingredients and their provenance. Aside from managing the business, access to quality food and sustainable ingredients remains a driving force for the founder. The son of two writers who left the city 30 years ago in pursuit of a better lifestyle and cost of living, buying groceries for his family meant visiting nearby farms and farmers markets. Though the subsequent exodus of creatives to areas such as the Catskills and Hudson Valley has shaped a different scene today, for his family the lack of local restaurants in those areas as recently as ten years ago inspired home-cooked experiences instead. As he made the reverse journey to the city to found his own business in 2008, Gelb carried the desire to capture the spirit of those family food experiences with him.

In addition to his desire to “reinvent” the dining experience, Tasting Collective was also founded to shake up the restaurant aesthetic. To Gelb, a world where diners sit opposite each other, separated by invisible walls of tableware and individual portions is a cold and impersonal one. The founder is keen to point out that this state of dining affairs is relatively recent; for most of human history the experience of eating was a communal one. Food was the vehicle to carry conversation, cultural exchange and create new culture in itself. With this in mind, the entrepreneur sees the modern restaurant experience as too centered around celebrating the food itself rather than the communion of people sharing it. His vision is to “break bread” with fellow diners and create scenarios where every guest can get to know the chef or host. 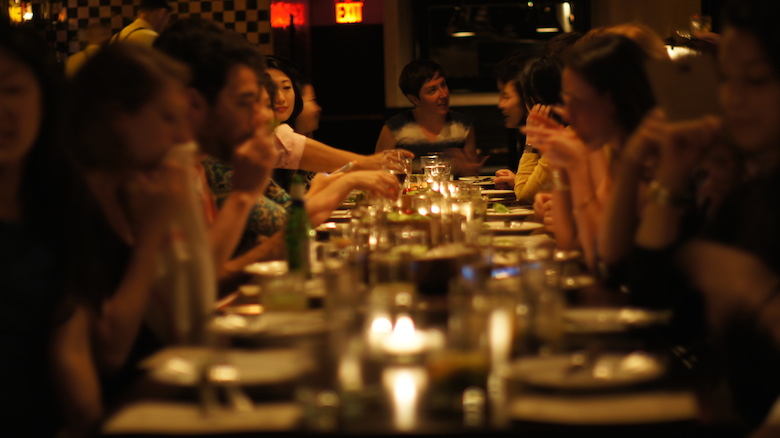 Gelb sees the modern restaurant experience as too centered around celebrating the food itself rather than the communion of people sharing it. Photo courtesy of Tasting Collective.

Gelb’s ambition extends to geography, in this case to places beyond New York. He has invested the past year in testing a proof-of-concept that can easily be transplanted to other cities. In order to get there and ensure his grassroots movement in NYC can continue to flourish, the founder will be launching a new model for Tasting Collective from October. For an annual subscription of $199, “community” members will receive VIP access to a series of events and benefits centered around good food and related experiences. Keen to find an “accessible” price-point, his hope is to enable food-makers and eaters an opportunity to form their own conclusions about the meal model today.

Perhaps the most immediate benefit of Tasting Collective for chefs is the ability to host a personal celebration of their art. For diners it’s the opportunity to commune with food and fellow diners in a way that’s both fresh and traditional at the same time. Financial benefits abound for both communities.

Finally for Gelb, Tasting Collective is the mechanism helping to turn the modern restaurant concept on its head. His is a theatrical dining experience tied as much to act of a communal gathering as the food itself. Gelb is the mysterious character introduced in The Dining Club’s second Act: an aspiring yet conflicted lothario hoping to court the affections of both chef and diner as they take center stage. Broadway meets Proust in the Madeleine Monologues, if you will. Quite a gamble. Thankfully for him the New York audience is already queueing around the block for the next performance.

Tasting Collective are offering Edible readers a 50% discount on subscriptions to members-only events and benefits launching in October. Sign-up for an account using code TCEDIBLE to receive an early invite and discounted membership.