Sammy’s Roumanian Is the Best Steakhouse in NYC

Like Katz’s Delicatessen or Carnegie Deli, Sammy’s gleefully embraces every facet of old-world Judaism that makes our people so vibrant. 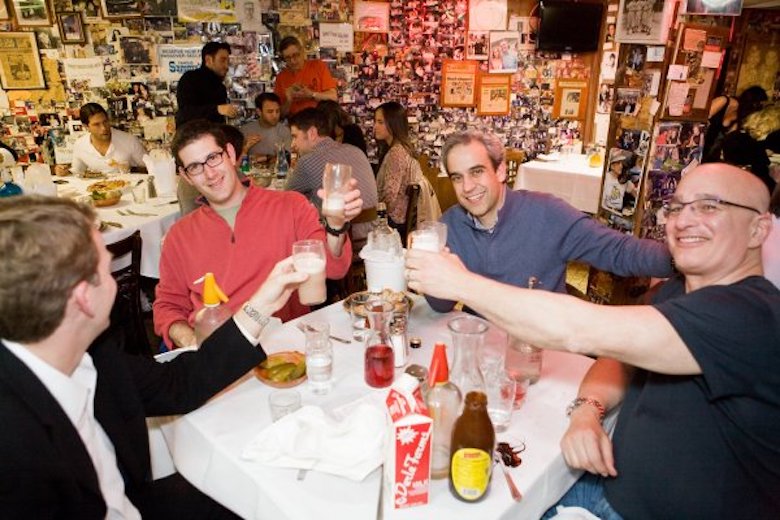 A look at the fun. Photo via Sammy’s Roumanian.

If we’re being perfectly frank, using the word “house” and “Sammy’s Roumanian” in the same sentence is a bit of an oxymoron. It’s more along the lines of a furnished basement or the living room of that long-standing neighbor who seems to live on the first floor of every apartment building in New York. As you walk down the dark stairs off Chrystie Street, you’re greeted by the raucous sound of laughter, forks on plates, and the crooning voice of a lounge singer named Dani Luv. This is Sammy’s Roumanian Steak House: a living, breathing, teeny-tiny portrait of old New York that has survived more than 45 years nestled within the confines of the Lower East Side.

Like Katz’s Delicatessen or Carnegie Deli, Sammy’s gleefully embraces every facet of old-world Judaism that makes our people so vibrant. You’ll find iconic Eastern European dishes like latkes, chopped liver (with grated radish, chopped onions, and gribenes with chicken fat), broiled veal cutlet, stuffed cabbage, and enough schmaltz to feed a small nation. Whether you’re going for the steak or the iced Ketle One vodka, the point is that you go and see what makes this famous restaurant so famous: the ambiance and the steak.

“It’s covered in this beautiful schmear of liquidy, melty garlic,” says owner David Zimmerman. “We tell everyone to order the steak like you order a T-shirt: small, medium, or large.” Unlike the stiff atmosphere of Peter Luger’s, Sammy’s taps into the celebratory, familiarness of a large Jewish gathering where everyone gets drunk and tells stories as they order dish after dish.

Much like the tattered layers of wheatpaste posters clinging to the skin of New York City walls, the origins of the first iteration of Sammy’s is a mystery. What we know about its pre-1975 history is that Sammy’s took its namesake from Sammy Friedman, a Jewish restauranteur and bad gambler who lost everything and had to take a job as a waiter at Katz’s Delicatessen. Before that, it was known as The Parkway (because it overlooked the park) and before that, it was just an innocuous little restaurant that served—what else—Romanian cuisine. Who it was that owned the very first restaurant that stood 88-ish years prior is a mystery.

Sammy sold the restaurant to a man named Stan Zimmerman in 1975, who transformed it into the glitzy, kitschy “adult Bar Mitzvah” it’s known as today.

“The walls were just wood paneling,” continues Zimmerman. “It used to look like a suburban basement, but my dad scotch-taped a picture to the wall and then put another one up, then two, then four, then it was a collage. We call it Jewish wallpaper. When this story comes out, I’ll print it out and tape it to the wall.”

Along with rebranding the inside of the restaurant, Stan and David worked tirelessly at perfectly the food and the ambiance. They tapped into their Ashkenazi Jewish heritage to cook steaks magnificent steak by way of a recipe that David says is about 80 percent kosher salt. David swears by the chopped chicken liver that you have to schmear on a piece rye bread—he calls it Jewish guacamole—and the rendered chicken fat known as schmaltz that should adorn every table in the restaurant. When it comes to dessert, there’s no question: rugelach (which David refers to as a Jewish version of a Fig Newton) and an egg cream.

There’s really no mystery as to why Sammy’s has managed to last in its many forms for almost an entire century in the Lower East Side. All you have to do is peak inside, smell the schmaltz, and listen to Dani Luv’s aptly named rendition of “It Had to Be You” called “It Had to Be Jew” to understand the appeal. With iconic restaurants like Carnegie Deli long gone, there’s no telling how long it’ll take for Sammy’s to shutter—if it even shutters at all—but as long as it’s around, Sammy’s Roumanian remains the best steakhouse in all of NYC.