Rooftop Garden or Not, North End Grill Doesn’t Want to Be the Blue Hill of Battery Park City

Their garden may not supply all of their ingredients, but by planting smartly, the restaurant has managed to bring new flavors to the menu. 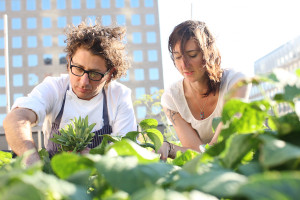 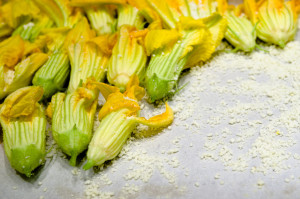 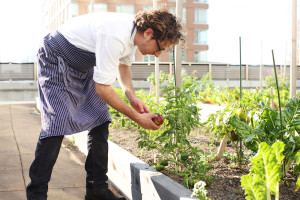 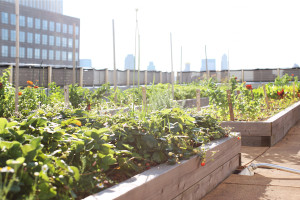 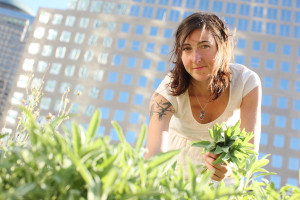 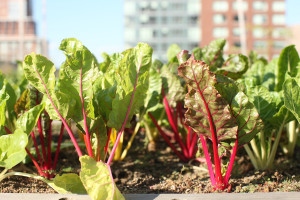 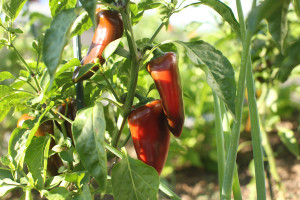 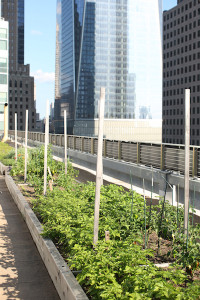 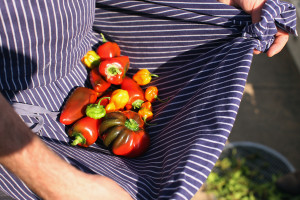 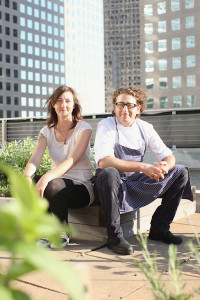 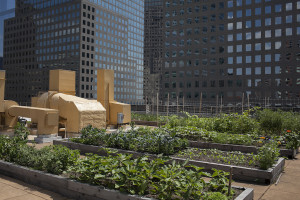 Since it became a trend, many restaurants have been trying to cash in on buzzwords like “seasonal” and “local.” For everyone that does it right, another seems to be stretching the definitions to their extreme (like “seasonal” fruit flown in from California in the wintertime). So it’s refreshing to find some honesty from Eric Korsh, head chef of North End Grill.

One of the many restaurants under the Danny Meyer empire, the three-year-old grill has a few major distinctions. The one most heavily publicized are the kitchen’s wood burning grills and dangerously hot mesquite charcoal ovens (there’s a reason why “grill” is in the restaurant’s name). But the other, not noted anywhere on their website, is a rooftop garden that’s put to work growing food that might otherwise be hard to find.

Though Korsh is still in his first year at the Grill, he’s already made some changes to the garden’s philosophy. When he arrived, he says there were maybe “29 things growing in small batches.” He quickly picked a list of six vegetables and herbs to focus on instead — carrots, radish, some head lettuces, savory, strawberries and aji dulce peppers. He worked with farmer Kristen Schafenacker (pictured above, who does much of the garden’s day to day heavy lifting) to move their produce in this new direction. “We grow fewer things and a lot of them,” Korsh says. Yet they still can’t grow enough to feed their thousands of customers 100 percent local. (He says that in the summer the restaurant menu is probably between five and fifteen percent roof-grown.)

On a typical day, the North End Grill might go through six cases of Boston lettuce and another twelve cases of red oak lettuce. To put it more simply, Korsh says, “If we planted the entire garden with red oak, it would last us one day.”

Their garden may not supply all of their hyper-local cuisine but by planting smartly, Korsh and pastry chef Tracy Obolsky have managed to bring new flavors to the menu. Most of Obolsky’s beds have been devoted to strawberries for dishes like her frozen strawberry shortcake (essentially a gourmet take on a Good Humor bar), herbs like anise hyssop or edible flowers that brighten the plate. The strawberries, of course, could be delivered from their regular distributors but delicate flowers are too much trouble to keep fresh and too expensive to buy out of house.

Korsh seems to also have two particular favorites in the garden. One is aji dulce peppers, or sweet and stocky chilies that are perfect for pickling. They pack a mild heat and light smokiness that make them the perfect accompaniment to fresh fish crudos. They are also very hard to source. The situation is similar with the uncommon herb savory which tastes a bit like a cross between rosemary and mint. “It’s one of my favorite herbs of all time,” Korsh says. Even if he were to order it, the herb would likely be wilted and old by the time it arrives “because no one else is buying it,” according to Korsh.

There are so many restaurants in NYC that it’s hard for chefs to differentiate one menu from another. As Korsh puts it, “All the same ingredients are available to everyone.” Yet by tinkering in hyper-local gardening twenty stories above the restaurant, he can attempt to add some memorable ingredients to the menu. For him, local is all about the quality of the food. “Anybody who’s serious about eating and cooking realizes that with every second from harvest to the time you eat it, that vegetable’s quality decreases,” Korsh adds. He admits that it may also be more cost effective in the long term to grow strawberries on the roof rather than buying them but that it’s more about the freshness than financials.

The reason you’re unlikely to hear more about the North End Grill’s garden is because Korsh feels its size is so small compared to the volume of food they serve. “I don’t want to pose as something we’re not,” he says, adding, “We’re not the Blue Hill of Battery Park City.” Yet you can tell that he’d enjoy bringing larger harvests down from the elevator into the kitchen. One idea they’re toying with is putting hoop houses over the beds — a move that would extend their growing season by two full months. The issue, however, is wind. Just a week ago, a particularly blustery day twisted the aji dulce seedlings so badly that their roots pulled right out of the ground. “If it’s blowing like it did the other day the hoop houses will end up on Murray Street,” Korsh worries.

There are so few restaurants that directly grow their own food in New York City that, for everyone, it’s a bit of a work in progress. But Korsh seems to have a firm grasp both on gardening’s hazards and its rewards. He explains, “Proximity to your food is a turn on — plain and simple.”