Rather than hot-and-sour soup and General Tso’s, dinner here might include chanterelle-stuffed spring rolls shaped like flowers or succulent, anise-kissed free-range chicken. 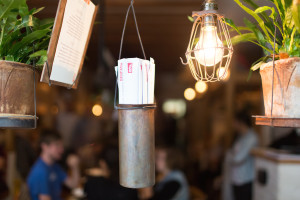 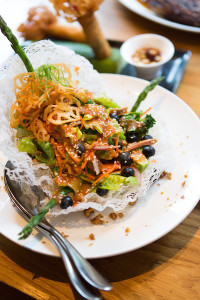 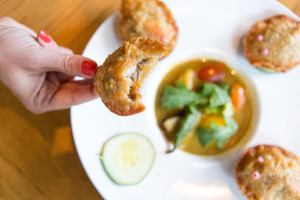 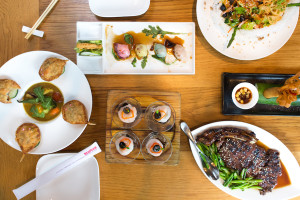 Bright dim sum. Chef Joe Ng, who can make 1,000 different kinds of dumplings, previously worked his wizardry at World Tong Seafood out in Sunset Park, where customers are likely to place their steam-cart orders in Cantonese. Steamed lobster dumplings. 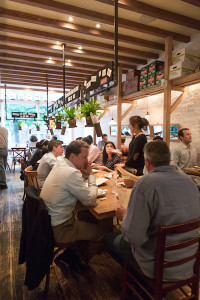 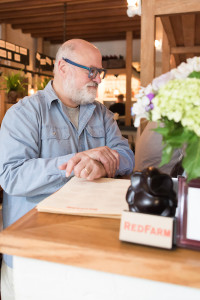 Koan head. “It never ceases to amaze me how much I know and do not know,” says owner Ed Schoenfeld, sounding as much like Buddha as the Brooklyn-born, Newark- residing Jew he is.  

RedFarm does not serve the kind of Chinese standards you’ve been ordering in for decades. Rather than hot-and-sour soup and General Tso’s, dinner here might include chanterelle-stuffed spring rolls shaped like flowers; succulent, anise-kissed free-range chicken; fat, crispy duck-and-crab dumplings that look like stingrays; chicken salad enveloped in fried noodles shaped to look like a giant clamshell; or dumplings reincarnated as Pac-Man characters.

Those now-famous, video-game-inspired, blueberry-eyed sweet potato tempura chasing shrimp dumpling “ghosts” stare up at you with tiny sesame seed eyes, awaiting their turn between your chopsticks. Instead of staring back, close your own eyes while you eat them, and concentrate on the ephemeral dough and sweet, delicate shrimp. Try to imagine you’re in the West Village, because your taste buds won’t believe you. They’ll swear you are in Hong Kong, where chef Joe Ng grew up—and learned to make dim sum. Now he can make 1,000 different kinds of dumplings and has a penchant for animal shapes.

“I wanted to make something that would get people talking,” says Ng. Maybe it’s a beautiful deep-fried sea bass, its crispy tail pointing toward the smooth wooden rafters lining the ceiling. Maybe you’re watching a plate of soft chicken dumplings as it passes, the trio of crisp taro strips mottled with purple dots jutting out from underneath a slick, dark sauce.

A central communal table provides the majority of the seating at RedFarm, so it’s easy to get a contact high off your neighbor’s plate of Katz’s pastrami reimagined as an egg roll. Short mirrors mounted just above each table are slightly angled to reflect dishes on the table and not the eyes of other eaters. At any given seat, you can see just about every plate in the restaurant, sizing up bowls of noodles across the room.

Meanwhile your pastrami-eating neighbor eyes your steamed lobster dumplings served in a martini glass or the shrimp shumai shooters that you’re thoughtfully savoring as the hot seafood dumpling and cold carrot-ginger bisque meet in your mouth.

“Joe just does whatever he wants,” says Ed Schoenfeld, the restaurateur mastermind, Chinese cuisine guru and co-owner of RedFarm. “He does things very differently. I’m content to let him.”

Schoenfeld’s wok-star reputation precedes him. A Brooklyn-born Jewish boy, he learned to cook serious Chinese food when he was 18 from the legendary Grace Chu. At age 20 he worked on the Upper East Side as maître d’ of Uncle Tai’s Hunan Yuan, New York’s first four-star Chinese restaurant. He was hungry not just for Chinese food but for the best food, and by age 24 he had visited every Michelin three-star restaurant in France. And he has traveled throughout China and Asia often, from a mid-90s visit to Hong Kong as guest of the city—his nosh notes were printed into a guide for both tourists and native—to a September 2011 visit to Taiwan as a guest of the Chinese government, circumnavigating the island, eating and learning as he went.

“It never ceases to amaze me how much I know and do not know,” he says, sounding as much like Buddha as the Newark-residing Jew he now is.

Schoenfeld met Ng, a master of dim sum, when the chef was working his wizardry at World Tong Seafood out in Sunset Park, where customers are likely to place their steam-cart orders in Cantonese. More than a decade ago, Ed was a regular at World Tong, and he recognized serious shumai and har gow. He developed a relationship with Ng and soon put the chef’s name—and noodles—in lights at Chinatown Brasserie in NoHo.

The RedFarm concept began in Schoenfeld’s head as a farm-to-table takeout spot—a slew of takeout spots all over the city actually—that would offer Chinese food made from the freshest ingredients, as well as authentic ingredients for home cooking. A sort of Seamless meets FreshDirect, where a single website offers tonight’s dinner as well as a line of premium Asian groceries. Schoenfeld’s investors and partners convinced him to create a sit-down restaurant first, in order to establish the RedFarm brand. And that’s exactly what they’ve done.

Now at RedFarm, Ng’s whimsical dishes bear little resemblance to anything Schoenfeld’s seen in New York or Shanghai—which he’s more than okay with.

“Why slap him in the face and tell him that it sucks, when it’s the opposite of that?” Schoenfeld offers.

While RedFarm cites a ‘Greenmarket sensibility,’ and pea shoots and Japanese eggplant may come from Jersey fields (Schoenfeld has been buying from local farms for decades), the kitchen is hardly locavore: “There are a lot of ingredients that grow in a rice paddy in China,” says Schoenfeld. But it’s all sourced with care if not obsession: prized Thai soy sauce made in Thailand or white peach flavoring sourced from Japan. A recent “soup dumpling” showcased foraged black truffles from France.

“We were ordering a kilo of black truffles a week,” says Schoenfeld, “If they were in the ground on Tuesday, they were shipped Tuesday night and arrived here by Wednesday or Thursday.”

Schoenfeld, now in his 60s, says he’s cooked seven days a week since he was 17, and despite his day job as a restaurateur, makes dinner every night in Newark, where he lives with his wife. Home cooking chez Schoenfeld may take you from the Southern United States to China to Portugal, with a dish of Southern-influenced smothered chicken with farmers market fresh garlic, shallots and sweet carrots, light soy sauce and a sprinkle of Portuguese sea salt.

But here at the RedFarm kitchen, ring molds punch out circle after circle of sweet potato for tempura, steamed vegetables get the ice bath treatment, and burners burst with jet flames as aromatic noodles swirl and char in the woks above them.

“Someone is here 24 hours a day cooking,” Schoenfeld says. And indeed to make it all from scratch requires careful skimming and scorching, grinding and simmering around the clock.

And that pace will only pick up now that RedFarm is expanding into a little empire. While it’s not quite takeout joints all over the city, RedFarm has taken over the old dry cleaners space downstairs, opening “Decoy” there right around the time you’re reading this, focusing on Peking duck and boasting a late-night bar menu. A second RedFarm is opening on the Upper West Side in the old Fatty Crab space. But at the original space, RedFarm regulars need not fret that they’ll get any less love. In fact Ng is developing a dish for them: Hello Kitty dumplings.

“We have very authentic flavors, and very inauthentic food,” Schoenfeld says, “proudly so.”