Pizza a Casa Pizza School Spreads Sauce, and the Better-Pizza Gospel, One Transformative Class at a Time

Since the school opened in April 2010, more than 27,000 pizzas have been made at a tightly configured counter, usually 16 pizzaiola-wannabes at a time. 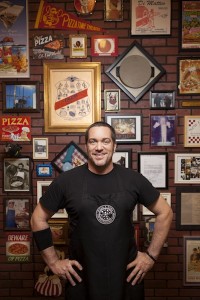 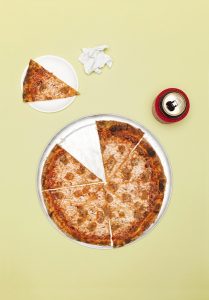 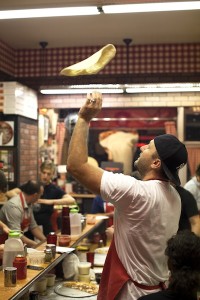 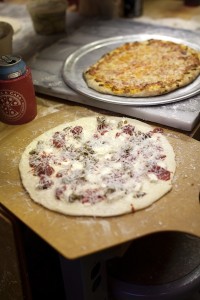 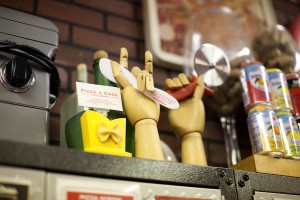 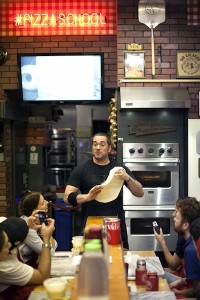 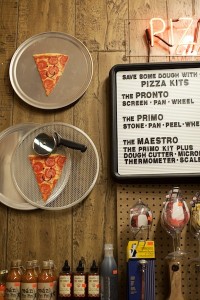 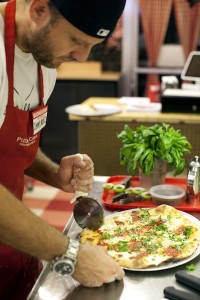 This fall, when I finally downloaded the 491 photos off the iPhone I fished out of my stocking last Christmas, it was rather shocking to see: We eat a lot of pizza in restaurants. And a lot of it is soup. We make better pizza at home.

That’s thanks to my having noticed a red awning on Grand Street just east of Chinatown a few years ago, the one between the Doughnut Plant and Kossar’s Bialys, the one emblazoned with “pizza self-sufficiency center.”

I wandered in, wound up getting a demonstration and was invited back to take a class with my consort. In four hours, we learned how to make the dough (and the super-easy sauce), stretch the dough, top the dough and bake the dough, all using easily accessible ingredients and a home oven. To call it life-changing would be an understatement.

Mark Bello, the founder of Pizza a Casa Pizza School, distilled pizza-making to the finest of arts while earning a master’s in sculpture in Chicago and missing the New York/New Jersey/New Haven pies he’d grown up on. For years he brought back carefully packed pizzas, but “one night, out with a friend, we decided to go to the supermarket to get the basics.” That was just the beginning.

A stint in a trattoria taught him how to masterfully deal with the dough, and other friends persuaded him he could be the exception to the “those who can do, those who can’t teach” rule — rather than opening a pizzeria, he could start a pizza academy.

Three little clickers in his 450-square-foot store-front keep count of how that has worked out: Since the school opened in April 2010, more than 27,000 pizzas have been made at a tightly configured counter, usually 16 pizzaiola-wannabes at a time. Every Saturday and Sunday midday he and his wife, Jenny (or their hyper-trained alternate, Neil Lesneski), demonstrate the construction of crackling-crisp pizzas to rival the best you will taste pulled out of 850-degree ovens in any crust-competitive neighborhood. (They also offer couples classes on Friday and Saturday nights, for $295 rather than the usual $165 apiece.)

Bello will make you a convert to King Arthur Flour, since it is unbromated and does make superior dough. And he will steer you to fresh mozzarella from Di Palo, the 111-year-old Little Italy icon a few blocks west. But otherwise, the cans of pureed tomatoes stacked over cabinets on one wall are a testament to his belief in 24-hour-supermarket pizza for all: Open a RedPack or Sclafani or Muir Glen, add a few cloves of minced garlic and a little sugar and salt if needed, and you’ve got sauce.

Students accustomed to soupy pizza also learn how layering works. The cheese must be applied first, and with a miser’s touch, then the sauce is ladled on. But the most important takeaway is that pizza dough is like piecrust — technique trumps recipe. And while Bello has video demos posted online and sells an app, students have come from as far away as New Caledonia to learn his “DJ method” of stretching the dough so that it’s both tender and supportive.

Jenn Smith, whom the Bellos hired away from Murray’s Cheese and the Astor Center to run social media, says the largest share of students — beyond those in New York, New Jersey and Connecticut — come from overseas. Many want to open their own pizzerias, in Mexico City, Singapore and beyond. The school also now includes lessons in “New York slice” pizza, saddled with shredded mozzarella.

And that mingling of cultures is another fascination. The Bellos say they are running the “United Nations of pizza” — at some classes they might have a Muslim woman in full burka arranging pear slices and blue cheese on her crust next to a couple from Georgia, “as in Atlanta.” There’s just something about stretching dough and sharing tastes that makes everyone feel as if it’s all one world.

Pizza a Casa also offers private events, which are very popular with corporations promoting “team-building.” As my consort and I learned, the classes are also a form of couples therapy; no wonder Valentine’s Day weekend is sold out almost as soon as the schedule is posted. Even celebrities are turned away.

Bello has also acquired a liquor license, which makes the classes even more convivial. And he continues to run a shop at the front of his storefront, where he sells all things pizza-related.

Once you master his techniques, you don’t need a stone. But he has two options if you insist.