Each autumn, Jerry Henkin takes to New York City’s parks to find food that grows on trees. He thinks you should, too. 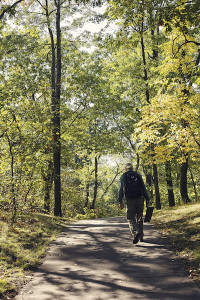 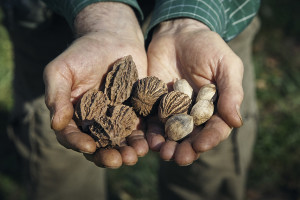 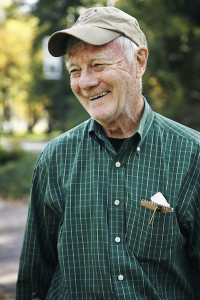 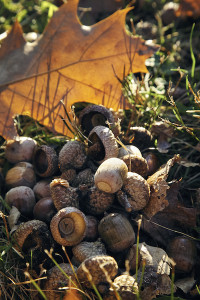 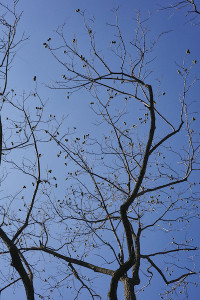 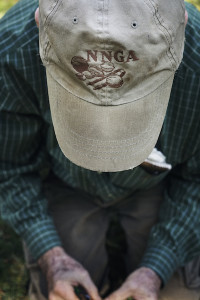 Jerry Henkin is a gentle, convivial man with a twinkling smile and a grandfatherly, warm air about him. That is — unless you are a black walnut. Should one of those tennis-ball-size fruits cross Henkin’s path, he will ferociously stomp on it, smearing and grinding its dull-green husk into the ground with a violent determination that might make a passerby wonder if he mistook the inert fruit for an attacking cockroach. That’s just the level of enthusiasm that nuts bring out in him.

Under the perfect blue sky of an autumn day in northern Central Park, Henkin had plenty of stomping to do. Black walnuts and their mother tree’s fallen yellow leaves littered a roadside trail, though no other park-goers seemed to notice that freely available nut buffet. Henkin had only the squirrels to compete with.

“Oh boy, look at all of these around here!” he said, stomping another husk into smithereens until it yielded a mini gremlin-egg-like nugget, coated in black-green slime. He smiled brightly, pinching the hard morsel between juice-stained fingers, and understatedly noting: “This is sort of a passion of mine.”

Henkin, 71, is one of New York City’s preeminent experts in the art of nutting — the technical term for nut foraging. He plans his vacations around nut season, making sure never to be away from the city in the fall. When that autumnal crispness enters the air, Henkin can be found scouring the footpaths of Central Park for acorns or gingko nuts, or gathering black walnuts up on Westchester’s Rockefeller State Park Preserve, which, around 17 years ago, allowed him to plant black walnuts on a third of an acre. Last year, he collected some 200 pounds of foraged nuts — an exceptionally productive year — from locations in and around the city. But rather than hoard them like a greedy chipmunk, he gave most of them away to friends, colleagues and people who simply asked.

“Jerry gives out tons of seeds every year and basically lets people plant his nuts,” says David Weisberger, a Henkin nut disciple and a graduate student in agronomy at Iowa State University. “He’s also a wealth of knowledge about anything perennial tree- or nut-related, and he’s very generous with that knowledge.”

Henkin wasn’t always a nut man, but he does remember being enamored with the idea of growing his own food as a boy. Some family members referred to him as a schmutzfink for his love of getting dirty, and he relished the warm garbage-like aroma of reeking, rotting gingkos on his Borough Park block. His first encounter with the world of farming, however, was slightly traumatic. He got ahold of some carrot seeds and planted them in an old cottage cheese box, but many weeks later, when he proudly presented the homegrown baby vegetables to his mother, she recoiled. “She said, ‘Those are dirty! Don’t eat those!’” he recalls.

Last year, he collected some 200 pounds of foraged nuts — an exceptionally productive year — from locations in and around the city.

Henkin, however, was not permanently discouraged. When he moved to Yonkers as a recently certified English teacher and newlywed, he quickly took to gardening, joining a neighborhood co-op and filling his windows with planters full of sprouts. One late September afternoon, a fellow gardener pointed to a tree and asked him, “Do you know what that is?” Henkin had no idea. “She said, ‘It’s a walnut!’” he recalls. She showed him how to extract those hard nuts from their squishy hulls, and explained how to dry the nuts found inside at home.

“That was about 35 years ago,” Henkin says. “I’ve been going strong ever since.”

After he discovered the secret of the walnut tree, a bit of research quickly led Henkin to the Northern Nut Growers Association, a nonprofit founded in 1910 by William C. Deming, an eccentric physician from Connecticut, “for the promotion of interest in nut-bearing trees, their products and their culture.”

“There’s a sense of connectedness in nut culture,” says Henkin, who now serves as the Northern Nut Growers Association’s librarian. “I love the warmth and fellowship of the community.”

Members are united by their love of nuts but also often by the eccentricity.

“The New York Nut Growers is a group of hard-core old dudes from around the state who love growing tree crops,” Weisberger says. “For someone interested in perennial crops, I didn’t have a lot of outlets besides these 75-year-old guys with an oddball interest in nuts.”

Native black walnut, butternut and acorn, plus introduced species such as gingko, European chestnut and hazelnut, literally drop food from the sky each autumn, providing a freely available source of nutrition that can be collected and stored for months or even years.

Even after years of endless discussions about nut growing techniques and countless hours in the field lovingly gathering those fruits, however, Henkin still struggles to pinpoint exactly what it is about nuts that attracts him so. For starters, he likes that they are rarer than typical fruits and berries, and less popular.

“I’m not personally into berries,” he says, “although some people interplant them with nuts.” Additionally, unlike a carrot or sprout, nut-growing requires immense patience. A young black walnut might not produce fruit for 15 years or more, leading some nut growers to note that one plants fruit trees for one’s children, nut trees for one’s grandchildren.

He also sees great potential in nuts for feeding those in need, both in New York and beyond, given that each nut is like a little parcel of concentrated protein, energy and vitamins. In pursuit of that goal, Henkin has sent samples to contacts in China, Mexico, Uruguay, Nepal, Malta and more (although the latter country’s lack of deep subsoil layers precludes them from growing anything more than “the occasional pecan tree,” he says). Those living around New York, however, don’t need to wait 15 years to harvest nuts from newly planted trees. Native black walnut, butternut and acorn, plus introduced species such as gingko, European chestnut and hazelnut, literally drop food from the sky each autumn, providing a freely available source of nutrition that can be collected and stored for months or even years.

“You get a sense of empowerment when you can grow or find your own food,” Henkin says.

For those who are interested in harvesting or growing their own nuts, both the association and Henkin are delighted to share their knowledge. Henkin has written up step-by-step instructions to help beginners learn to process walnuts and butternuts, and he includes common troubleshooting solutions and potential hiccups.

“Often, there will be white, one-quarter to one-half-inch-long husk maggot larvae inside the husks that ooze out with the split and rotting husk; a pungent odor may be present,” he warns in his instructions for processing butternuts. “Don’t be dismayed.”

As for black walnuts, he explains it’s important to gather them while they’re green or only spotted with black. In our area, that window is from late September to early November, when walnut husks will be spongy in texture and spicy in smell. Stomp and scrape the hull off à la Henkin.

Beware handling the nuts directly if you have a job interview later that day; their hulls leave a dark stain the color of henna, which can be one tough nut to crack when it comes to cleaning (indeed, black walnut juice can be used to make ink or clothing dye).

Over the years, he’s perfected his squirrel and chipmunk calls, and he often daydreams about running into Serena and Venus Williams while gathering black walnuts near Central Park’s tennis courts.

Take those freed nuts home and wash them, and then dry them for two weeks to a month in a cool place away from sunlight. (Henkin uses his bathroom, although he admits, “My wife doesn’t like that.”) Once dry, the nuts can be opened using a heavy-duty cracker (Henkin’s weapon of choice is Gerald Gardner’s homemade Master Nut Cracker, which can be ordered online for $60 to $85), or by simply by smashing them between two rocks, hunter-gatherer style.

After cracking, you can skip the cooking formalities and (in most cases) just eat them raw. But fancier options are available; entire cookbooks have been dedicated to nut recipes, ranging from gingko nut porridge to cinnamon-and-black walnut bitters. But Henkin’s favorite way to eat nuts is tossed with a little olive oil and kosher salt, then briefly sautéed.

Of all of the nuts he’s ever tried, the butternut, with its “unique, lingering, delicate flavor,” reigns supreme so far as his taste buds are concerned, but he points out that any freshly harvested nut is preferable over a generic store-bought mix. Some chefs agree with him. Henkin recently met with Dan Barber of Blue Hill to talk nuts, for example, and to give Barber a few samples.

For Henkin, nutting tends to be a solitary activity. Henkin’s wife enjoys eating nuts but is usually too busy to join him in the field, whereas his daughter will have “nothing at all to do with nuts.” Mostly, he doesn’t mind; over the years, he’s perfected his squirrel and chipmunk calls, and he often daydreams about running into Serena and Venus Williams while gathering black walnuts near Central Park’s tennis courts.

“Not to go all hippie on you, but perennial crops have been a big part of the landscape of the Northeast for a long time,” he says. “I’d love to go back to working with trees, and it’s especially interesting to try to bring back something native.”

But as he gets older, he is beginning to realize the importance of “getting someone to carry on when you’re gone.” That, Henkin hopes, is where Weisberger comes in. Several years ago, Weisberger — an aspiring farmer then working at the Stone Barns Center —  heard of Henkin through the nut grapevine. So he cold-called Henkin to ask for some advice about nut growing. Coincidentally, they discovered that they both lived on Riverdale Avenue in Yonkers, so five minutes later the two were shaking hands. Weisberger soon took to joining Henkin in the field and attending nut meetings with him. Although Weisberger has moved to Iowa to pursue his graduate degree, he harbors dreams of returning to New York and purchasing his own small plot of land somewhere upstate, where he can plant perennials and patiently wait for his nut trees to bear fruit. If that plan proves too expensive, he’s also open to “alternative ideas,” like rehabbing plots of public land back into shape.

“Not to go all hippie on you, but perennial crops have been a big part of the landscape of the Northeast for a long time,” he says. “I’d love to go back to working with trees, and it’s especially interesting to try to bring back something native.”

For Henkin, the more nuts — and nut lovers — the better.

“I constantly tell people about how to do it, and about where the nuts are,” he says. “I don’t want them all for myself.”