Chefs including Hugh Acheson and Alon Shaya will bring their talents to the Seaport District for two-week residencies at the two-level pop-up restaurant throughout the summer. 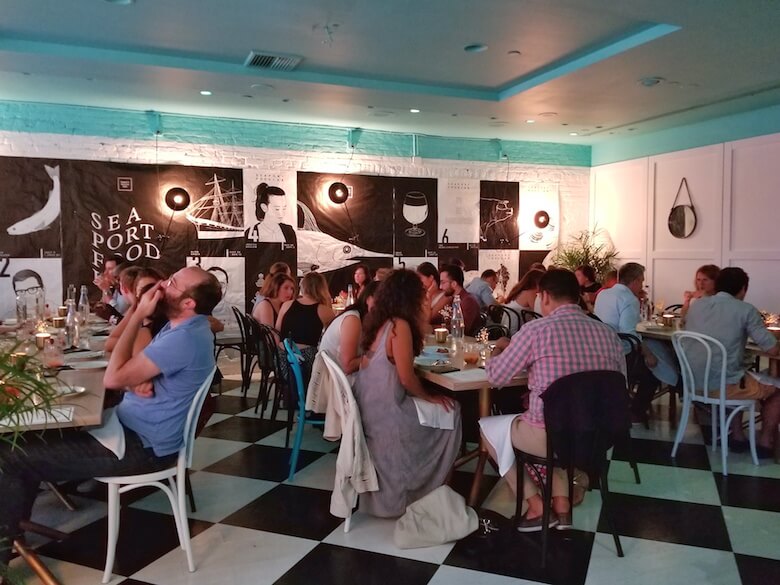 Most food-obsessed people will happily travel for food, but New Yorkers are a special breed in that we are inherently spoiled. Along with all the longtime staples, hot newcomers, food carts, and food halls, we have the bonus of attracting visiting chefs for collaborations and pop-up dinners. And the lineup at the new Seaport Food Lab (19 Fulton Street, Manhattan) adds to the many reasons it’s worth staycationing in the city this summer.

Eight award-winning chefs from around the country will bring their talents to the Seaport District for two-week residencies at the two-level pop-up restaurant throughout the summer. Chicago’s James Beard Award–winning dream team from One-Off Hospitality (Blackbird, Avec, Publican) kicked off the series with a five-course dinner on June 20 to July 2. Owing to pesky liquor license issues, drinks commenced pre-dinner with a sparkling toast at the new lively, trellis-roofed Garden Bar anchoring the Seaport District’s cobblestoned streets.

Despite the unfortunate dry spell (expected to smooth out over the upcoming weeks with the debut of Sixpoint Brewery collaboration beers and specialty cocktails), alcohol-free pairings were shockingly good and able to stand up against inventive dishes like avocado salad with chicory, Dungeness crab, and grapefruit, and braised short rib with littleneck clams, fava beans, spinach, rice and seaweed. Along with previewing dishes from chefs Cosmo Goss and Erling-Wu Bower’s forthcoming California concept Pacific Standard Time, there were a couple of menu cameos from chef Michael Solomonov of Dizengoff and chef Mark Ladner of Pasta Flyer. Courses are generous and served family-style on seated communal tables—expect to cozy up with your neighbors and share evenly.

Tickets for Acheson’s and Shaya’s stints are available now through Resy and run a cool $75 and $100, respectively, with a portion of proceeds benefitting the South Street Seaport Museum (always a good reason to justify treating yourself). Stick around afterwards to check out the much-needed slew of Seaport District food and beverage spots have opened in tandem over the past couple of months, including the self-pour beer stations at Clinton Hall, the Shake food truck by Black Tap, and a peek at upcoming restaurants from Momofuku, Jean-Georges and byChloe.