What do big bands and quintessentially American dishes such as strip steak and mashed potatoes have in common? Supper clubs! 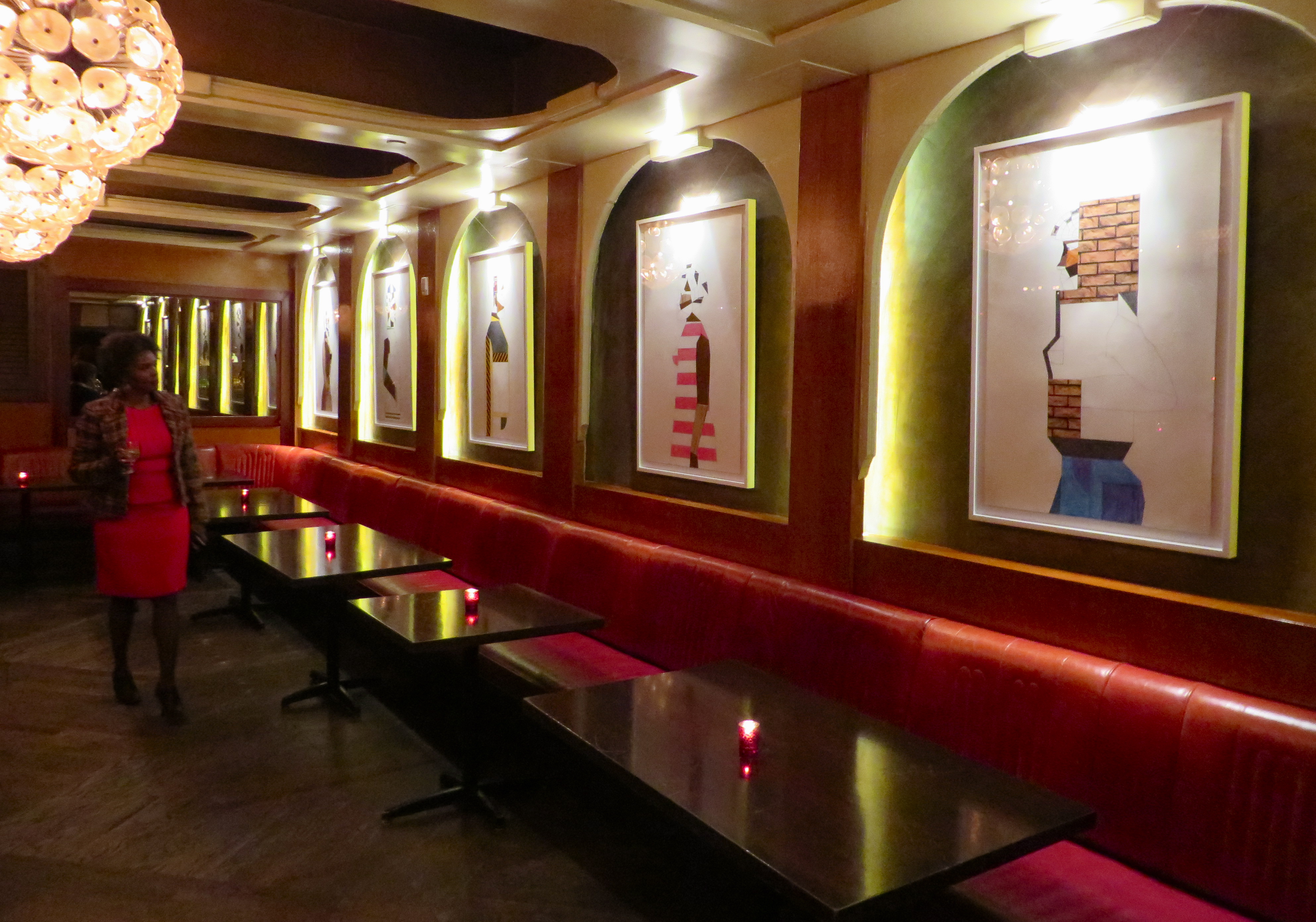 Derrick Adams’ artwork is the first formal installation to line the walls in Ginny’s Supper Club. Photo via Ginny’s.

In the 1920s and early 1930s, Prohibition-era supper clubs shadowed as speakeasies, but once Repeal Day came in 1933, cocktails were served with great panache at venues across the country. New York City arguably had most of the best supper clubs, hosting performers such as Charlie Parker, Ella Fitzgerald and big bands such as the Count Basie Orchestra. For nearly 40 years, supper clubbing meant hobnobbing into the wee morning hours with stars such as Frank Sinatra and Marilyn Monroe, but just as the 1960s ushered in a new era for our country, the decade also marked the end of the golden age of supper clubs.

Although times have changed, a few of the old supper clubs remain open to this day, and a number of retro ones opened during a resurgence of swing dance culture in the late 1980s and 1990s. For people wanting to get even a glimpse of old New York City—the jazz, the glamour, the martinis—a supper club is the perfect place to throw on a pair of dancing shoes while eating traditional American fare.

Note: There’s either a music charge of anywhere between $15.00 and $25.00 or tickets that must be purchased at each of the following venues. It’s recommended that reservations be made via the supper clubs’ websites. The following spots are listed in the order of when they opened.

It originally opened under the name of Club Deluxe by heavyweight boxing champion Jack Johnson in 1920, but just a few years later the club was bought out and renamed the Cotton Club Owen Madden. “Owney,” as he was called by friends and enemies alike, was a white gangster and parolee just out of Sing Sing, and during the Cotton Club’s heyday, he imposed a strict segregation, hiring African-American luminaries such as Duke Ellington and Cab Callaway to perform for a white audience. In the late 1930s, the Cotton Club closed during race riots in Harlem, but since then, it has reopened twice, and its most recent incarnation opens its doors to all diners, dancers and performers. Make sure to visit on a Monday night to swing dance to a 13-piece swing band called the Allstars. Between sets, dancers can flag down a waiter to order off an à la carte menu with a number of soul food options, including fried chicken, collard greens and macaroni and cheese.

The original headliner for Birdland, which opened in 1946, was Charlie Parker (the “Bird”), but he was by no means the only jazz great to walk through the venue’s doors. John Coltrane and George Shearling each recorded live albums at the club, and today, some of the best jazz performers on the planet play to a full crowd. Although people generally visit Birdland more for the music than the food, for a real treat, book a table to see the Birdland Big Band on a Friday night and order a heaping plate of succulent baby-back ribs. Don’t forget to order one or two martinis for good measure.

The debut of the Fleur Seule Latin Big Band tonight at Swing 46! 💃🕺🔥🔥🥓 #mmmbacon

Although this supper club in the Theater District didn’t open until 1997, the venue has become well-known for listening and dancing to music from the Swing Era. Start the night off with a dance lesson, or simply sit back with Cosmopolitan and watch some of the city’s best swing dancers come together to dance the Lindy Hop or Jitterbug. For $35.00, the prix fixe (served before 7:30pm) will get you an appetizer or salad, entrée and dessert, although you can’t go wrong with items off the main menu such as a marinated and roasted half a chicken.

Since 1999, Jazz Standard has served up an impressive number of Grammy-winning bands and musicians such as the Mingus Big Band, Azar Lawrence and Rene Marie. The club serves Southern cuisine made by Blue Smoke (founded by Danny Meyer’s Union Square Hospitality Group), and it’s impossible to go wrong with either the beef brisket, chopped pork shoulder or buttermilk biscuits. There’s also a solid, albeit basic, cocktail menu. The Bourbon Smash (bourbon and cranberry orange shrub) is particularly nice, as is the Moondog (made with gin).

Candlelit tables, velvet banquets and smooth jazz. With enough seating only for 50 people, Smoke Jazz & Supper Club’s speakeasy-like vibe is perfect for a date night. Critically acclaimed chef Patricia Williams pulls together an inspired Southern menu, although it would be easy to get by with only ordering appetizers such as a classic shrimp cocktail, served with Smoke’s own special cocktail sauce, or a simple charcuterie that includes Serrano ham, smoked speck, pickled vegetables and petit toast. Sunday through Thursday, the club serves a three-course prix fixe meal for $42.00—the breaded crispy pork chop is recommended.

Ethiopian-born Marcus Samuelsson’s soul food restaurant in Harlem, Red Rooster, became an overnight success when it opened in 2010. Whereas the food at most supper clubs these days is more of an afterthought, Samuelsson’s soul food–inspired menu attracts food lovers from around the country, including President Obama, who devoured a plate of short ribs. Downstairs from the Red Rooster, Samuelsson and a partner opened Ginny’s Supper Club, which serves many of his classic dishes in addition to offering live performances. Chicken and waffles with smoked maple syrup, hot sauce and pickles is a meal of an appetizer, while the shrimp and grits, with andouille sausage and okra, is simply a hell of a meal. Want to get straight-up presidential? Order the Obama short-rib meal for two.