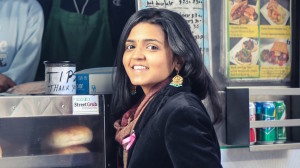 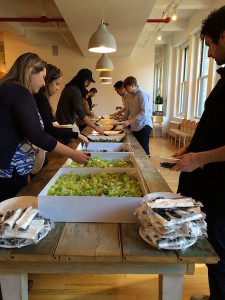 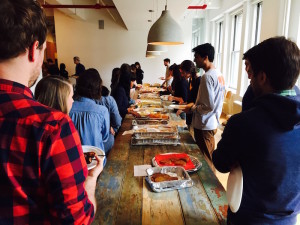 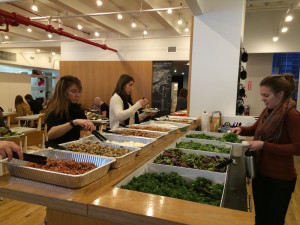 Deepti Sharma Kapur is a name to watch. Not only did she recently make Forbes’ “30 under 30 list” but the food and tech entrepreneur is making waves in the corporate catering world with her business FoodtoEat. Her ambition? To use tech to forge economically stronger and more well-informed food communities.

Born and bred in Queens, Kapur is the daughter of immigrant parents who settled in the US from India when they were teenagers. She learned to question social inequities from an early age and, in addition to a childhood spent volunteering, found herself heavily influenced by altruistic icons. Sensing a “shift change” in American politics during the 2008 Obama campaign, she took the opportunity to work with political campaigns on national social issues. It seemed her path was set.

Despite intentions to attend law school, a revelation that occurred while standing in line outside a food truck set Kapur on a different track. Having found herself waiting for more than 20 minutes for a peanut butter cookie, the time-pressed student experienced a moment of impatient introspection. For someone short on time and overwhelmed by the range of mobile food choices on offer in New York, Kapur wondered if there might be a better way to manage that wealth of choice and customers.

She began to invest time talking to local food truck owners, predominantly Indian immigrants like her family, using her language skills. Seeing a correlation with her own roots, she found many food truck owners tended not to consider themselves as small businesses and therefore weren’t addressing important operational flaws. Instead the largely young immigrant population saw their food trucks, with low startup costs, as a starting point for larger ambitions like saving for business school. Food was the conduit to fuel the economics of their burgeoning American dream.

The more Kapur conversed with these entrepreneurs, the more she wondered how technology, at a time when social media platforms like Twitter and gadgets like iPads were taking off, could be applied to supporting the food truck business model. She realized these new platforms were the key to streamlining traditional problem areas such as order fulfillment. Both food truck workers and customers would benefit.

The trial was so successful that in the past two years, Kapur has pivoted the business to bring over 900+ food trucks, restaurants and caterers into the corporate marketplace at Tumblr and beyond.

Holding firm to her convictions, she launched FoodtoEat in 2011. With a host of problems in working with food trucks though, Kapur eventually broadened her scope to restaurants and was inspired by models like Seamless, Grubhub and other consumer-centric food delivery services.

Investigation revealed consumer choice to be the primary driver for the success of those platforms, with far fewer benefits afforded particularly to small businesses contending with tighter margins and less bargaining power. Intent on becoming the “Robin Hood of Seamless” to benefit the small business community, Kapur set her sights on re-engineering the food business model once and for all.

She settled on a new direction for FoodtoEat that married the benefits of food delivery with the food truck business model. Having received a lot of interest from companies like Tumblr, where food trucks catered to employees once a week during the summer months, Kapur seized on the opportunity to scale the food truck model from a weekly to daily benefit. The trial was so successful that in the past two years, Kapur has pivoted the business to bring over 900+ food trucks, restaurants and caterers into the corporate marketplace at Tumblr and beyond.

The range of meals on offer is provided by the food truck and local food community, with special attention paid to highlighting the provenance of the food and people who have prepared it.

Her small team of only five full-time employees caters to two different food communities: food eaters and food producers. Applying the principles of Lean business (creating more value with fewer resources), FoodtoEat reinvents the traditional largescale catering business model (used by external vendors like Aramark) to cater to a range of businesses during the day and for special events. The range of meals on offer is provided by the food truck and local food community, with special attention paid to highlighting the provenance of the food and people who have prepared it.

FoodtoEat targets office managers and HR managers to showcase its service. Tech companies in particular have proved most receptive to the idea of hosting catered lunches and other meals as part of their suite of employee benefits. From giants like Tumblr and Google to smaller startups the, on average, young male employees enjoy a wealth of culinary catering. Arguably disruptive, fast-paced tech culture is a good fit for a business in need of “early adopters” for this new catering model. Kapur has seen less enthusiasm to disrupt the status quo more traditional domains such as finance and legal establishments.

So how does the service work? Office managers can choose to either visit FoodtoEat’s online platform and select the services they require or have an account manager visit the office to support the company’s schedule. While the business offers a huge variety of food businesses to order from, the business model performs best once the range of choices is limited to a certain range. As with any marketplace, matching supply and demand is an important factor in ensuring the business continues to grow. Curated community is the name of the game.

The entrepreneur wants to encourage eaters to ask: “What am I eating? Why am I eating this food?”

Curation is arguably all the more critical to business success given the wealth of emerging tech options at an office manager or worker’s fingertips. So where does Kapur see FoodtoEat in the context of other caterers like Ox Verte, FoodieForAll, workplace CSAs or workplace food delivery services like Caviar or FreshDirect’s new FoodKick app? Kapur is quick to stress Ox as a great potential vendor for their platform while Foodie and Caviar’s business models address a different set of problems, namely steadying demand and widening bottom-of-funnel for premium establishments.

Despite her success to date, further self-imposed challenges lie ahead for Kapur. That’s because over the next 12-18 months, her mission is to inspire creativity in food choices through education. The entrepreneur wants to encourage eaters to ask: “What am I eating? Why am I eating this food?” She plans to revolutionize everything from the choices we make as eaters to how businesses view good food as a tool to support their bottom-lines.

Kapur hopes to achieve that goal through better storytelling and compelling data. Firstly, by highlighting the range of health and wellness benefits — and ultimately fewer sick days or healthcare costs — associated with making better food choices, Kapur aims to inspire companies to place more emphasis on providing good food to their employees. “If we can change the palates at the top then [more people] will change their choices,” says Kapur. Secondly, her political experience comes into play with a focus on supporting policy changes by sharing the downstream effects of incentivizing corporate support for more local food businesses. In both instances data will be key.

Kapur hopes to achieve that goal through better storytelling and compelling data.

The founder is on a mission to educate a future generation of socially- and culturally-minded eaters, too. For starters she is investigating partnerships with education establishments to help develop palates early on in life. Kapur believes equipping children with the means to sample a range of foods and form their own conclusions is the key to building better food communities in the long run. With Kapur set to become a mother herself this year, it’s little wonder education and childhood food experiences remain top of mind.

From food trucks to corporate catering, childhood food education and beyond, this young entrepreneur certainly has a full plate. However Kapur is keen to emphasize that juggling many projects is something she relishes. But if your workplace or child’s school meal doesn’t come with a side of local relish just yet, don’t fret. You can bet she’s working on it.