Where and Why to Eat Filipino Food in New York City

“They should know that there’s a lot to Filipino food. There’s a lot of different regions and each one has its own variation.” 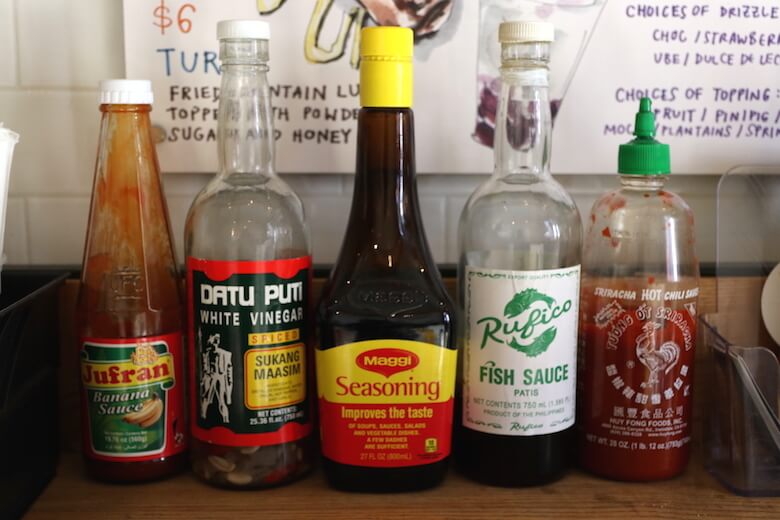 The condiment station at Lumpia Shack. Photo by the author.

Ube and Filipino food have been making the rounds on social media lately. Purple soft-serve and cakes made with the vividly colored yam abound on Instagram, and New Yorkers love eating at Jollibee, the archipelago nation’s famous fried chicken joint. There’s more interest in what Filipino food is and the flavors it has to offer the city.

But this cuisine is a lot more than just another “ethnic” trend; talented chefs of Filipino descent are sharing flavors that they grew up with and love. It’s become evident now that there are more restaurants in Manhattan that are introducing a reimagined versions of Filipino food those chefs grew up with to new patrons.

Neil Syham started his business Lumpia Shack Snackbar by having a stall in Smorgasburg and serving what he calls a lighter version of Filipino food. There are crunchy fried pork options, and even vegetable-filled lumpias, which are stuffed crispy fried rolls. The menu also has different option rice bowls, salads, pickled vegetables and spicy banana ketchup.

“When you think about good Filipino food, the traditional stuff are things you get from your relatives, your lolas,” he says. “So I try to add modern twists to the traditional food here and introduce that flavor to new customers.”

He was born in Manila to a Chinese-Filipino family that also works in the restaurant business, and moved to the United States as a child and grew up travelling to and from both homes. He knew that he had to share the tastes and smells found in his family gatherings to New Yorkers.

On the walls, there are black-and-white photos of his family back home, photos of him as a child, an elaborately drawn menu with all the lumpia options. In the back, the kitchen is full of racks of meat being prepared for brining in different adobo dishes. A lot of work is put into creating new items, and making as much of the menu in house and with the best ingredients at hand. Syham likes that his hard work can be showcased to more people thanks to the newfound interest in Filipino food. 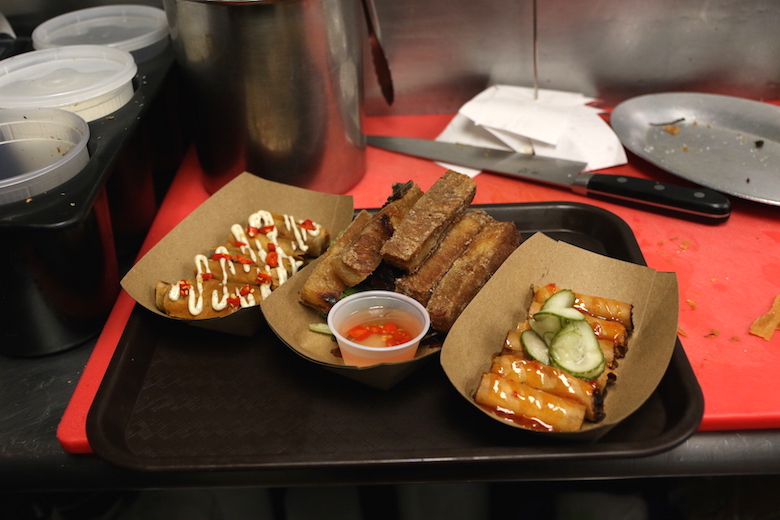 An array of lumpia and snacks at Lumpia Shack. Photo by the author.

“It’s bringing in new people, and it really has helped business,” he said. “But they should know that there’s a lot to Filipino food; there’s a lot of different regions and each one has its own variation.”

Another mash-up that includes the Pacific Island cuisine comes from Flip Sigi, a Filipino taqueria that combines Filipino flavors like chicken adobos in bowls, burritos and tortillas.

Co-founder Michael Ryan said that before he started working with chef Jordan Andino, he didn’t know how diverse the flavors in Filipino food were and how popular they would become. The first location for Flip Sigi opened in lower Manhattan in May 2016. There is already a second location in the Upper East Side that opened this September.

“Our food plays off and celebrates that the cuisine of the Philippines is a mismatch of Spanish and Asian flavors,” said Ryan.

He thinks that the cuisine is only going to continue to become popular and says that it reminds him of how other Asian cuisines spread through New York in the past.

“Japanese food wasn’t interesting about 20 years ago,” he said. “Now you can get a sushi roll at a gas station.”

Andino was inspired by his mother’s side of the family who come from Cebu. The first dish he developed for the restaurant came from his grandmother’s chicken adobo recipe.

“I’m inspired to cook Filipino food because it’s an untapped market and is underrepresented in the food industry. I want to lead the movement so my grandmother’s food can live on,” he said in an email. “I love that my culture’s food is gaining more attention.” Customers can look forward to ingredients like vinegar, spam, ketchup, garlic, soy sauce, coconut and mango.

“I want our guests to realize that Filipino food isn’t scary and, although they may not understand the names, it’s food they have had in one way or another,” he said.

Like Andino, Leah Cohen, the co-owner and chef of the Lower East Side’s Pig & Khao and Jersey City’s Piggyback Bar, was inspired by her Filipina mother’s cooking.

“The menu at Pig & Khao is Southeast Asian; it gives me a lot of freedom to have a wide variety of dishes from different countries,” she said in an email. “I wanted to pay homage to my Filipino side, which is why a good part of the menu has so many Filipino dishes.”

The recipes she grew up with are comfort food for her and, like the other chefs, she’s excited that her family’s culture is being recognized.

“Five years ago, when I opened Pig & Khao, not that many people knew what Filipino food was,” she said in an email. “Now people are more familiar with the dishes and flavors from the Philippines, which makes me honored to be a part of the community.”