New York’s Most Groundbreaking Catering Is Made by Refugees

At your next event, treat your guests to authentic Syrian, Iraqi or West African home cooking. 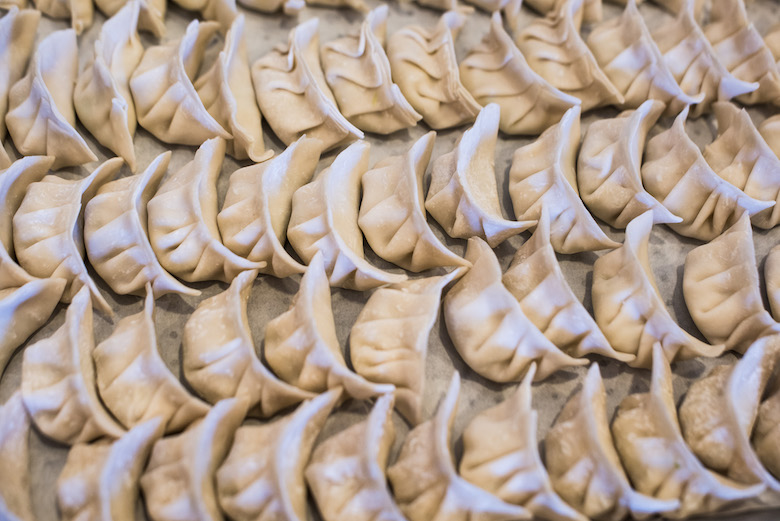 Dhuha was 12 when she began helping her mother in their kitchen in Baghdad. She took to it immediately and soon mastered dishes ranging from tangy sumaq salad to potato kibbeh stuffed with beef and onion. As she got older, her culinary skill became the stuff of family legend, and she happily complied with requests for delicate cylinders of walnut-, cinnamon- and cardamom-filled baklava, or heaping pans of vegetable and raisin-studded biryani. “There’s nothing I like more than cooking,” she says. “I love everything about it.”

In 2013, though, Dhuha and her husband made the decision to leave their home—mostly to ensure that their two young boys would have the best possible future. They secured refugee visas to the U.S. and moved to Flushing, Queens, to begin a new life.

The family settled in well, but Dhuha—who prefers to go by her first name for privacy reasons—still did not have a job. Then, last winter, a call came from the International Rescue Committee, a nonprofit, non-governmental humanitarian aid group that helps refugees get settled. A job, her caseworker told her, had opened with Eat Offbeat, a catering start-up that exclusively hires refugees with exceptional ways in the kitchen. Might she be interested?

“I didn’t hesitate to say yes,” she says. “I’ve been working here for almost a year now, and I love every part of the job.” 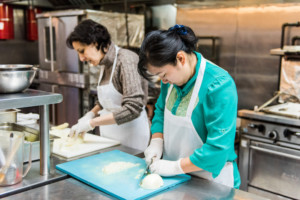 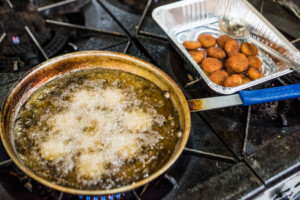 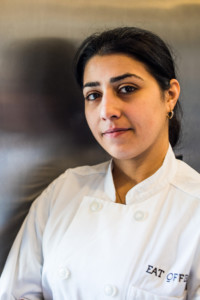 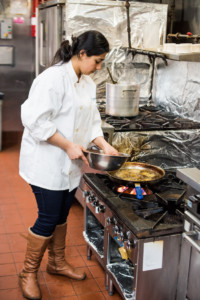 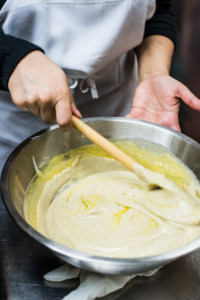 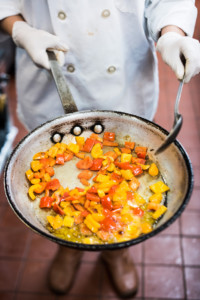 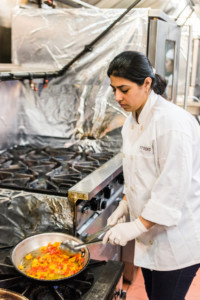 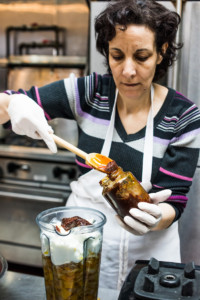 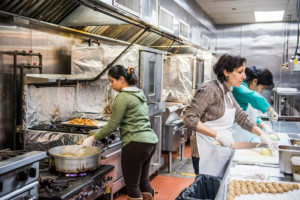 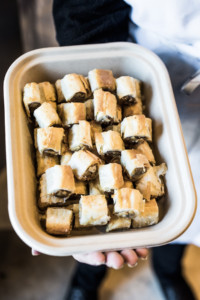 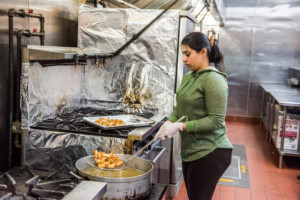 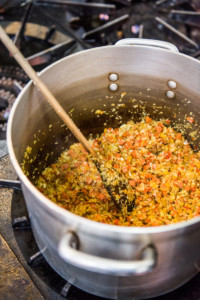 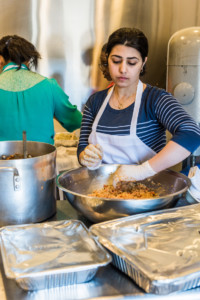 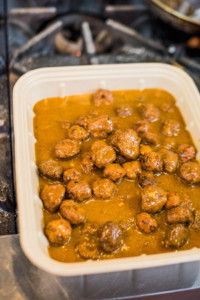 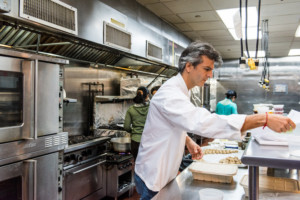 Dhuha is one of just 14 talented former home cooks now employed as professional chefs by Eat Offbeat. All of them happen to be women, and most have been in the U.S. for about two years. They hail from countries as diverse as Guinea and Tibet; Eritrea and Algeria; the Ivory Coast and Syria. Professional cooking experience and English language proficiency are not prerequisites, but passion, talent and pride in the kitchen are.

Manal Kahi, Eat Offbeat’s co-founder and CEO, is herself a recent arrival to the U.S. by way of Lebanon. She came in 2013, as a public administration graduate student at Columbia University. She planned to pursue a career focusing on energy and the environment until a series of disappointing encounters with store-bought hummus sent her spiraling down an unexpected path. It simply did not measure up to what she was used to back home. As she readily admits: “I have very high standards when it comes to hummus.”

So Kahi called her grandmother, who is originally from Aleppo, to ask for her recipe. She hoped to satisfy her cravings by reproducing her gran’s famed hummus in her own kitchen. The results were alright, but certainly not great. The story likely would have ended there, with Kahi resigning herself to a life of subpar hummus, had she not mentioned the problem to her business-savvy brother. He immediately said they should find someone whose hummus rivals their grandmother’s, so they could not only eat it themselves but also sell it. But who? Given that their grandmother was from Aleppo and that the Syrian crisis was constantly on the news, it didn’t take much brainstorming for them to land on the idea of employing refugees. They soon expanded from a Syrian focus to a global one—acknowledging that there’s more to good food than just hummus. 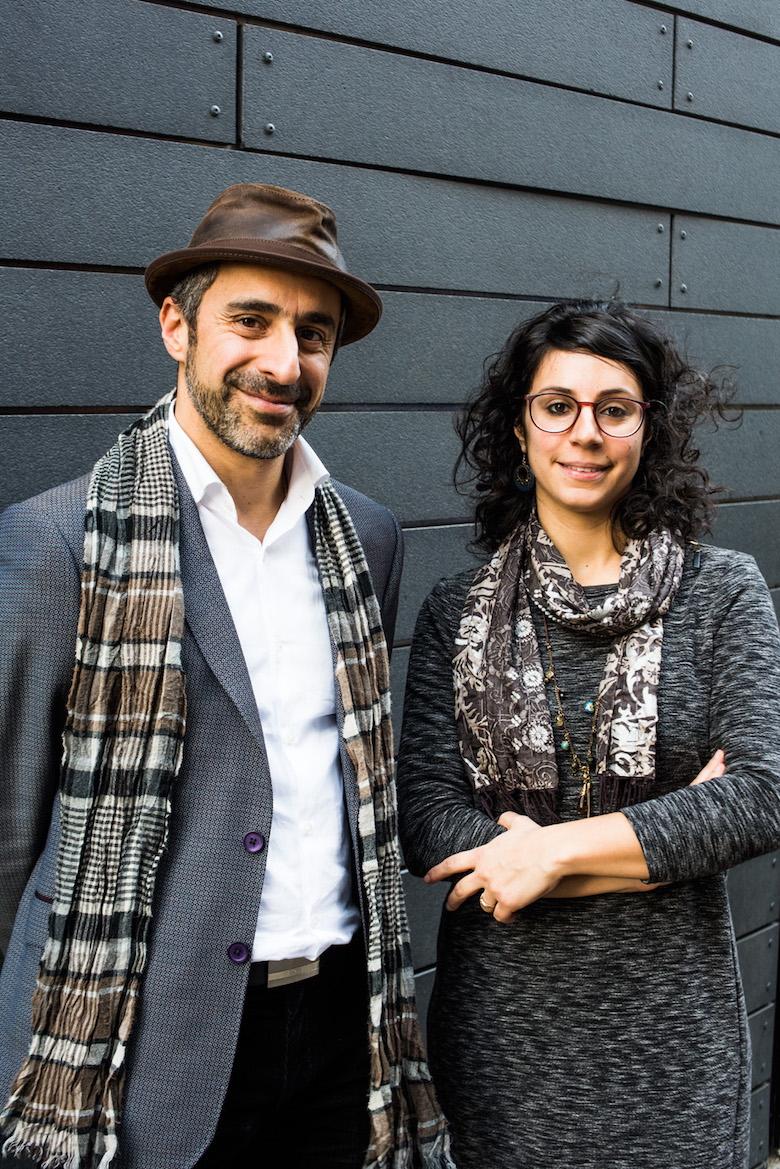 The next step was finding talented chefs who also happen to be refugees. This may have been an insurmountable roadblock were it not for the International Rescue Committee. Kahi approached them and they jumped at the idea of a partnership. “They’re happy because they get a job for their client, and we’re happy because we get the very best talent,” Kahi says.

So far, Eat Offbeat’s chefs hail from seven countries and growing. Rather than try to be an ambassador for a standardized version of their nation’s entire cuisine, though, each chef brings her personal favorite dishes to the table, complete with quirks and individual touches. “We want our chefs to make these recipes as they do at home,” Kahi says. “If the chef skips the green pepper because her husband is allergic, or adds extra garlic because she thinks it tastes better, then we want it that way.”

Juan Suarez de Lezo, Eat Offbeat’s culinary officer, trains all the chefs to navigate the intricacies (and potential perils) of the company’s professional kitchen, located in an unassuming building in Long Island City. He also teaches them how to scale dishes from family-size portions to servings that can feed up to 1,000 people and ensures that menu flavors are harmonized despite containing dishes from several countries. “Working with these chefs is one of the best professional experiences I’ve ever had,” says de Lezo, who has put in time at the likes of Per Se and Eleven Madison. “I can tell you, they’re much better chefs than the ones you sometimes find in pro kitchens. Some of them have such great talent, it’s really amazing.”

“Working with these chefs is one of the best professional experiences I’ve ever had,” says de Lezo, who has put in time at the likes of Per Se and Eleven Madison.

Early on, Kahi decided to focus on group catering rather than individual household orders, not only because it was logistically easier, but also because she sees the chef’s cooking as a conversation starter. Even in a city as diverse as New York, it’s not every day that residents encounter Syrian eech (a light salad of bulgur wheat, tomatoes, green onions and pomegranate molasses), Nepali chari bari (chicken meatballs in a cashew sauce) or Eritrean adas (red lentils cooked in assertive Berbere spices).

As Dhuha says, “I like the fact that New Yorkers can be surprised by all the new flavors in my cooking, that they say, ‘Wow, this is something new and so good.’”

Eat Offbeat opened last year, and already it delivers daily to hungry patrons—40 percent of whom are repeat customers—at corporations, nonprofits and universities spanning Manhattan, Brooklyn and Queens. Kahi plans to continue growing the New York market, and hopes to eventually replicate the model elsewhere in the U.S. and Europe—or in any city where adventurous eaters and refugees can both be found. The company is also planning to publish the first cookbook written by refugees, launching a crowdfunding campaign to support the project in March. 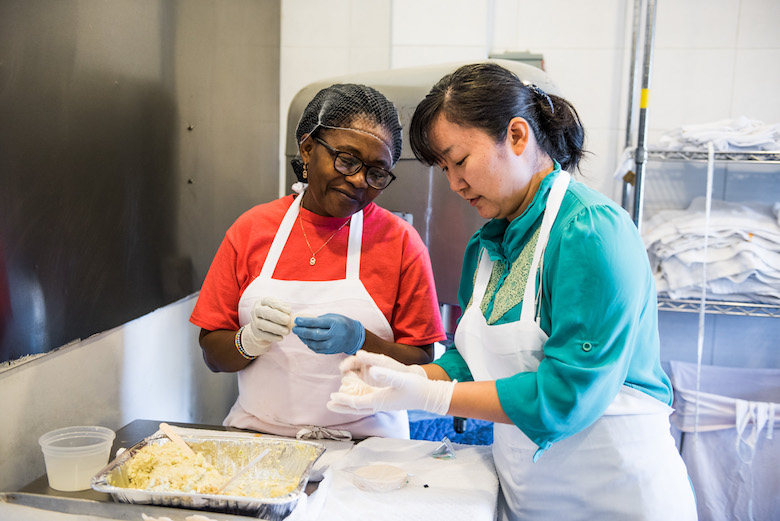 As Eat Offbeat grows, Kahi hopes to provide not only jobs for passionate individuals but also to create a bridge between the chefs and their appreciative patrons. “We want to change the narrative around refugees, to provide a new story in which they are bringing something of value to the U.S.,” she says. “They’re contributing to the local economy and making the food scene in New York even richer.”

For this reason, she steers away from terminologies like “refugee chefs,” which frame her employees first and foremost as refugees. “It’s about switching the perspective,” she says. “They’re chefs who happen to be refugees, and given the right chance they have a lot to offer.”

While last week’s executive order on immigration shook up the group—“They all have families, and it could have been any one of us affected,” as Kahi says—in many ways the chefs have become even more determined to contribute to their adopted country. Amid the protests and outrage, Eat Offbeat orders have also increased. “We’ll keep doing what we’re good at, which is helping people discover excellent new food and highlighting the value refugees bring,” Kahi says.

As for Dhuha, her entire family is back in Iraq, and she’s unsure if she’ll be able to follow through on plans to visit them in Baghdad this summer. In the meantime, though, they are regularly in touch by Skype. “My family is very proud and happy that I’m doing this,” she says. “Every time I call my father, he says, ‘What did you cook today? What did you feed the Americans?’”