Brooklyn Dispatch: Prime (Lunch) Meats, Or, Our Photo Editor Takes His Dad Out for a Memory-Filled Meal 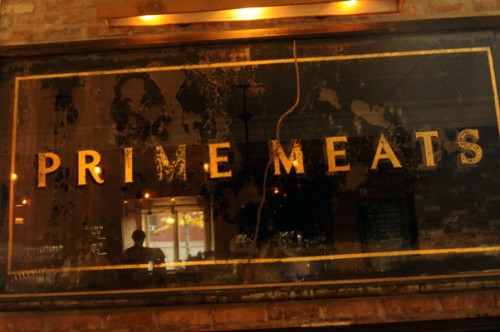 “The specials today are pastrami and roast beef”.

“Wait, stop right there,” my father said after an eager glance at the menu. Often the mention of these (mostly mass-produced) cold cuts can leave people cold. But Prime Meats, the Germanic-influenced spin-off of Frankies Spuntino (profiled in Edible Brooklyn’s Summer 2007 issue) on the corner of Court Street and Luquer Street, had just unleashed a lunchmeat program that is utmost prime! This comes on top of its already well-known revivalist sausages (bratwurst, knockwurst and weisswurst) and sauerbraten.

Growing up in Kensington on Ocean Ave, my father was within walking distance of the Prospect Park Parade Grounds. As documented in The Brooklyn Cookbook by Lyn Stallworth and Rod Kennedy Jr., he was weaned on the “hometown immigrant” foods like knishes and “sephardic vegetable pickles surrendered by Syrian Jews in Flatbush.” In the 1980s, my father moved less than an hour upstate with my mother to raise my brother and I, so we never benefited from the bounty of his Brooklyn heritage.

This Saturday is my father’s birthday. I attempted to make him a batch of my Grandmother’s Sweet and Sour meatballs, but as he corrected me with a pucker, “there’s a bit too much sour salt.” (Note to self: adjust recipe from 1T to 1t.)

It wasn’t until one afternoon, sitting in the sun-stroked banquets at Prime Meats-which are as dark-grained as the Bavarian pretzels they serve–that our collective and nuanced nostalgia set in. For my father, a time of watching the Brooklyn Dodgers at Ebbets Field; for me, eating lunch at our kitchen table in Westchester listening to him reminisce about those very days.

The common ground was a carefully crafted sandwich, once thought of as the sodden contents of my brown paper bag during school recess, but now made, thanks to Prime Meats, with accoutrements like malolactic fermented dill pickles and sauerkraut. (Stressing that the devil is in the details.)

Who knew that this year, it would be with a sandwich, that I say, “Happy birthday, Dad.”