The bûches de Noël at Maison Kayser in New York City are not the same as in Paris, Tokyo or London. 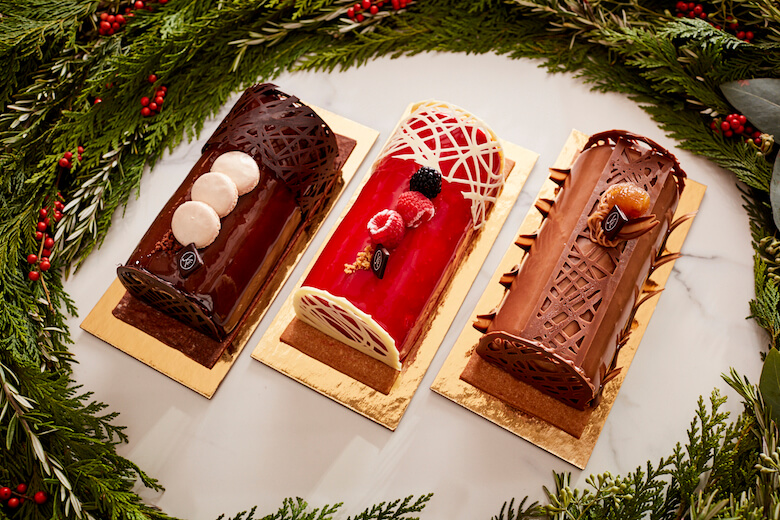 The three bûches de Noël on offer at the NYC locations of Maison Kayster this year. Photo courtesy Maison Kayser.

Eric Kayser is having a blast. Here in Manhattan for the pre-opening party of the new Maison Kayser Midtown East, he’s out on the floor making sure everything’s perfect before he invites his guests in—and they actually are his guests. He’s invited employees who work in the office tower that houses his newest bakery to all have lunch on him. Half an hour before the doors open, people are lined up down the block.

It’s surprising to see how hands-on this busy pastry chef, boulanger, cookbook author and entrepreneur is—where does he find the time? Since he opened the first Maison Kayser French artisanal bakery-café in Paris in 1996, the brand has grown to over 200 shops in 25 different countries. There are currently 15 locations in NYC, with another opening by the end of the year.

The atmosphere is ebullient. Eric, along with his operations managers, training managers and executive chef, are checking everything twice while chatting with everyone on the staff. With the holidays approaching, we asked Eric how Maison Kayser does their Bûche de Noël, or Yule Log Cake.

“Every year we produce something new, a new idea,” he explained. “But we use the basics from the origin of the recipe. My father and grandfather both made these cakes. For the bakery, we start planning in May, because we need to do it right and to know how many we want to make, because the cake is here for only three weeks and there’s a lot to do, so we have to plan ahead. At home, we have the same cake and bread every year for Christmas: coffee-flavored buttercream Bûche de Noël and chestnut bread. I am happiest when the biscuit of the coffee bûche is well soaked, and the buttercream needs to taste strong like espresso.”

The Bûches de Noël at Maison Kayser in New York City are not the same as in Paris, Tokyo or London. Each city has a different favorite flavor profile that’s considered when developing recipes.

“The tradition is expanding to other countries. I was impressed by the interest in the Bûches de Noël in Japan and Mexico,” Eric said. “In France, the tradition of Bûche de Noël is rooted in each family. A lot of people like to do it by themselves with their children the day before the Christmas Eve party, and some prefer to buy the bûche because of the time commitment.”

We asked Eric for advice on making a Bûche de Noël at home. “The first time I baked a Bûche de Noël, I was about 16 or 17, at home,” he said. “My father was watching and I’m not sure it was so good. I decorated it with a small Christmas tree, a plastic figurine.” If you’d like to try to make one yourself, there’s an excellent recipe in Eric’s new cookbook, Maison Kayser’s French Pastry Workshop—A Step-By-Step Guide.