The processed cheese, famous in India, is now being found on unexpected menus. 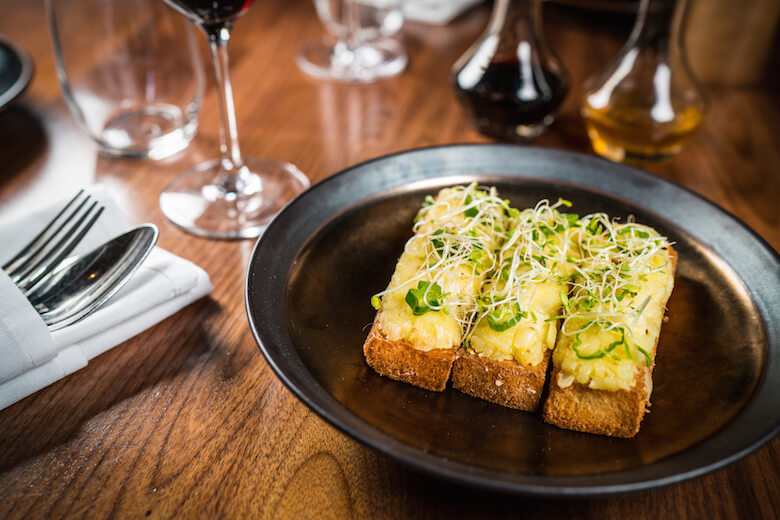 Amul cheese, an easy-to melt, easy-to-store, processed pantry cheese found in my grandmothers’ kitchens, is familiar to many who have roots in India. While Amul cheese has long been a staple on restaurant menus in the outer boroughs—Mumbai XPress in Floral Park serves a phenomenal grilled cheese with Amul brand products and the cheese dosas (fermented rice crepes) available at many neighborhood Indian restaurants use this salty, unctuous product—it is only recently that it’s found its way into Manhattan fine dining.

“I grew up with [Amul cheese] and I love the taste,” said Anita Jaisinghani, owner and chef of Pondicheri in NoMad. Jaisinghani immigrated to the United States from Gujarat, a state in western India, and recalled her mother giving her cubes to munch on her bus ride to school. Although paneer—a fresh, pressed cheese—has a place in everyday Indian cuisine, the Amul brand is synonymous with Indian “cheese.” Amul was the first company to make an attempt at an Indian processed cheese in its Khatraj, Gujarat, headquarters in the 1950s, and its standardized variety of cheddar cheese made from buffalo milk flooded the market, according to The Oxford Companion to Cheese by Catherine Donnelly.

The brand’s Hinglish print ads are legend; the Amul Girl is India’s answer to Uncle Ben or Colonel Sanders. Pondicheri’s breakfast menu includes paratha, a ghee-crisped, whole wheat flatbread topped with Amul cheese, cashews and currants, and served with a cilantro chutney. Next week, Jaisinghani will introduce an onion and cheese kulcha, a leavened flatbread similar to naan, with Amul cheese, paneer and raclette onto her lunch menu. “The Amul cheese just adds the ‘it factor’ to the dish,” she said.

Chintan Pandya, head chef at Rahi in the West Village, grew up in Mumbai, and said his affinity for Amul cheese is also rooted in nostalgia for the street foods of his childhood, especially his mother’s chili cheese toast. Rahi’s most popular appetizer, according to Pandya, is that very chili cheese toast (recipe included) made with milk bread, Amul cheese and shishito peppers, and served with a micro-bean slaw. “[The cheese] has a wonderful saltiness when eaten on its own, out of the tin,” he said. “But melted, its taste is a different level.” Rahi’s newly introduced brunch menu also includes a cheekily named “Madam Ji,” Pandya’s take on the croque-madame with brioche, Amul cheese, béchamel, farm bacon and fried egg.

Both Jaisinghani and Pandya said that patrons often look askance at Amul cheese on their menus. “They ask what it is, and I tell them that it is processed,” said Jaisinghani. “But is nothing like Velveeta, which has no flavor!”

Combine green chili, Amul cheese, egg, salt and pepper together in a medium bowl and stir until fully combined. Set aside.

Toast the sliced milk bread on a lined cookie sheet in the broiler until golden brown on both sides. Let bread cool.

Spread the cheese mixture evenly over the toasted bread slices and top with chopped onions. Place the bread back on the lined cookie sheet and toast under broiler until cheese melts. Serve hot.