The prized Aztec ingredient huitlacoche is now being cultivated for chefs and the Union Square Greenmarket. 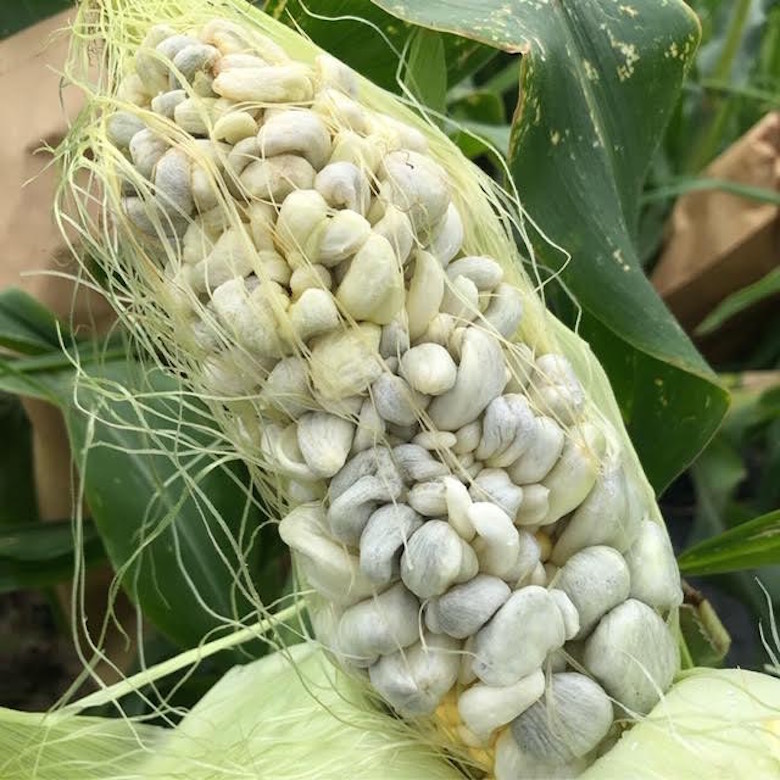 In the United States, when this mysterious and grisly anomaly popped up, farmers were flustered: It meant losing revenue, and so they gave the engorged and discolored kernels on their stalks the name devil’s corn.

When Aztecs discovered the same diseased crops of corn, bursting with charcoal-colored fungi, they were over the moon and called it huitlacoche, Nahuatl for “raven excrement.” According to the Cornell Mushroom Blog, in a post by Fahma Bob, the Aztecs believed cuitlacoche (another spelling) “possessed mystical, even aphrodisiac powers.”

By 1989, the James Beard Foundation got ahold of this ancestral delicacy and hosted a huitlacoche-themed dinner, giving the obscure ingredient new life and rebranding it in European terms as Mexican truffle.

This ingredient has a particularly sentimental hold on me. It was my first discovery of the strange and wildly delicious. I reveled in its dark hue and ancient name, huitlacoche, pronounced, whee-tla-KO-cheh. And since my move to the United States in 1999, I kept an eye out for my favorite quesadilla filling to no avail, only getting my fix when crossing the border to Tijuana, and even then it was difficult getting my hungry 8-year-old hands on it.

Huitlacoche is a pathogen, a disease that corrodes corn and grows the charcoal-colored fungi on the cob. It boasts a nutty, mushroom-like flavor, and can easily be sauteed with a sprinkle of salt, epazote and onion. It’s served traditionally in dishes like soup, in sopes, tamales, tlacoyos and, my childhood favorite, quesadillas. I still crave it.

Twenty years later, and almost 3,000 miles away from home, I finally found it: fresh, in season and in New York. Tyler Dennis, specialty produce farmer from Alewife Farm, cultivates it.

“People know about it in American agriculture mostly because it’s considered a pathogen in the corn,” he told me at his stand at the Union Square Greenmarket.

“[They’re] trying to eradicate it because it’ll hurt their corn crop,” he says. But not Dennis, who has been asked by chefs for years to grow it.

Blue Hill is one of the restaurants in question, and since Dennis already grew a variety of sweet corn, he would occasionally find it in the fields. “When I would find it,” he said, “I would bring it to people and they would be very, very excited about it as a novelty.”

Dennis has been working on cultivating it for three years now. It’s his only experience growing fungi.

But that didn’t work. He’s now taking a different route, one removed from the method of the Aztecs, who would intentionally inoculate by scratching their corn stalks at the soil with a knife to encourage the growth of this pathogen.

Dennis is talking to college professors who are studying it academically, like Profesor Karen Snetselaar from St. John’s University, a mycologist who has teamed up with her student working on a special huitlacoche project.

“There’s kind of limited research that has been done about it at least in the U.S. about how to actually encourage it, cultivate it,” Dennis said. “[Snetselaar] was the only one I found who had written papers about it.”

“It surprises me that there wouldn’t be more established knowledge about how to cultivate it, because it’s been around for thousands of years,” Dennis reflected, echoing my thoughts. He thinks it could be a product of a lack of communication from the United States to Mexico—something he hopes will change.

“Here people really don’t know how to do it,” he said.

The tides and demands for specialty produce are changing, with high-profile restaurants like Blue Hill and Cosme knocking at his door for devil’s corn.

Dennis is gearing up for his third inoculation, to have more for the next couple of weeks, and hopes to have it available every summer, when the crop is in season.

“They were very excited about it,” he said.

He’s excited about it, too, and likes the taste; a chef-turned-farmer at Alewife whipped it up in a carnitas pozole recently for the crew.

But nothing compares to the simplicity of a huitlacoche quesadilla, which I hope Dennis will try, the classic antojito from my childhood that in a few small bites celebrates the history of Mexico.