I was fortunate enough to enjoy two great meals in the past couple of weeks. In a celebratory mood, let me briefly tell you where I went and what I ate. 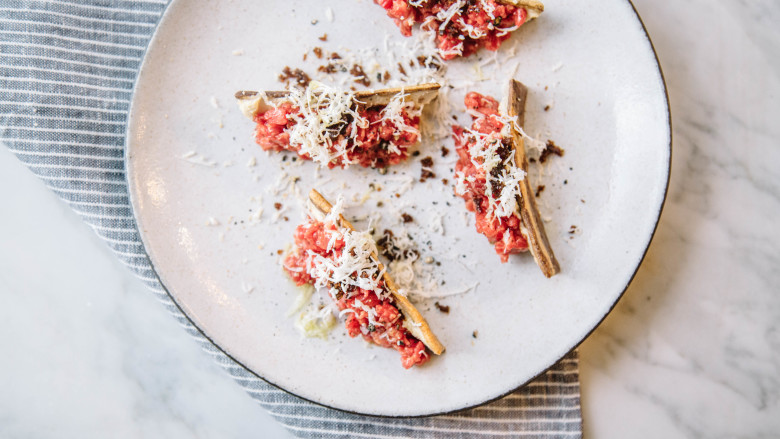 At dinnertable, there wasn’t a single disappointment, from the short rib tartare to the potato to the pecorino dumplings. Photo courtesy of dinnertable.

Though I write about food for a living, and sample a pretty broad spectrum of options, it’s still rare to be wowed. “Hey that was a decent wonton,” I might say. Or perhaps, “Cool sandwich.” At worst: “Earlier I was hungry; now I’m full.”

There really aren’t that many meals that make me do the thing where I take a bite, then look around at my companions with goofy eyes. Like: “Are you guys noticing what’s happening in our mouths right now because it’s pretty remarkable and I am pleased and thank you for being with me in this important moment.”

I was fortunate enough to enjoy two meals like that in the past couple of weeks; I am thankful. In a celebratory mood, let me briefly tell you where I went and what I ate.

I went to a press preview last week for a new restaurant, and frankly was a little wary. It’s a tiny spot in the East Village called dinnertable—I’m a little salty about precious spellings and capitalizations (see: bakerie). Plus this new place is billing themselves as a “speakeasy.” Whimsy siren!

All that to say—I was wrong, very wrong. First, the speakeasy conceit isn’t over the top; you walk through Garret East’s bar to a subtle door in back, ring a bell, you’re in. (Garret West has the reverse schtick—you have to walk through a Five Guys to get to the bar). And the back space is incredibly intimate and inviting, just 20 seats and a handsome open kitchen.

But the food, my goodness the food. Everything was quite exceptional, from the simply dressed chrysanthemum salad to the kicky cocktails to the plush lasagna I wanted to take a nap inside (don’t judge). My friend Desi was visiting from out of town and I kept telling her: “It’s not always this good.”

There wasn’t a single disappointment, from the short rib tartare to the potato and Pecorino dumplings to the winking “Choco Taco” send-up for dessert. We floated into the night, coasting on the fumes of a truly remarkable meal.

Have you ever had a friend blind date? Like your pal in Boston says: “Oh you simply have to meet my Brooklyn friend Anenome, you guys would get along famously!” When you’re a busy New Yorker, it can be hard to make time for these semi-strangers but my two cents is: Do it. Your friends have good taste! (Usually.)

I went on a friendship date recently with flavor expert Nadia Berenstein (speaking at MOFAD this week!), and her melodic partner Robbie Lee. They took me to Little Pepper, in the far reaches of northern Queens. I am forever in their debt.

In a happy coincidence, Pete Wells had just given a good review to Little Pepper on the week we drove up there. But as testament to how remote the College Point neighborhood is (remember it from Gatsby?), we were seated immediately at 7:30 on a Friday night. And we feasted.

Hungry from the outset, we ordered with abandon, a glutton’s night out. The wait for our food was significant—Nadia and I guzzled Tsingtao like it was food—but well worth it. Every dish was aces, a dizzying array of umami and spicy and silky and sharp. (Okay we didn’t love the cold luffa dish, ordered simply because we figured out it’s the same veggie used for loofah sponges.)

We did a good job! Almost everything was devoured by our piggy quartet, and we probably could have done more damage if forced. I was on such a high afterward, I’ve lost much track of what we ate; luckily Nadia has killer detail retention. Here’s her rundown (though I believe we got more than this):

shredded potato with pickled cabbage—those were the julienned potatoes that were somewhat crisp-tender, served room temperature.

the Szechuan pickled vegetable appetizer—mostly cabbage, vinegary Szechuan peppercorns, good to eat before the main things, and then save some to eat after the main things for palate-cleansing/restoring purposes.

crust of cooked rice with pork—you remember those crusts of rice? in the super savory sauce. with the floppy, translucent brown mushrooms.

spicy whole green pepper—that was the one that had the pepper that was so spicy that it warped my mind.

did you guys also get the cumin lamb or pork, that comes in the aluminum foil? (Ed. note: Yes, the lamb. Was awesome.)

In conclusion, if your friends don’t have a Volvo like Nadia and Robbie, rent a Zipcar or a helicopter. Doesn’t matter how you get there—you must try Little Pepper.