Bira91, a beer “imagined in India,” has aspirations to be one of the top 10 craft beers in the world in just five years. 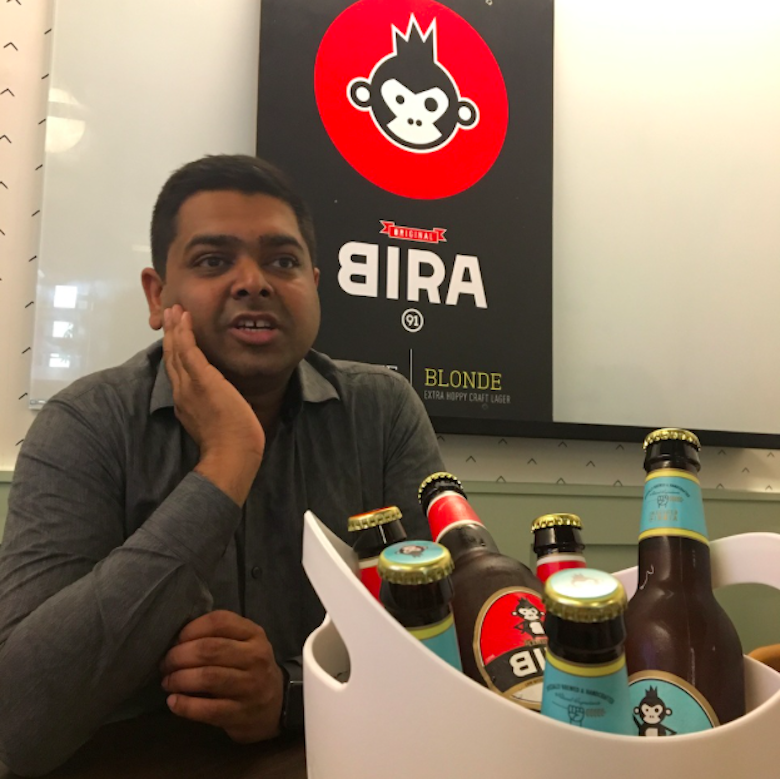 Bira91 founder Ankur Jain, shown at his WeWork office, has assembled a team based in New Delhi, Brussels and now New York to make Bira91 a top global beer brand in five years.

Investors in start-ups will often ask about the “TAM,” or total available market. The bigger the better, usually. So how’s this for a pitch? Launch a craft beer brand in India, the world’s second most populous nation (good for the TAM), and where beer drinking has started to rise from some of the lowest per person levels in the world.

And why not take it one step further: Develop some patent-pending “one-way” keg technology that allows you to ship beer at a fraction of the cost of the current beer chain. Now—essentially thanks to a recyclable food grade plastic keg that is much lighter than metal kegs, has a better air seal, is easier to ship and easier to tap—your total available market is the entire world of crazy craft beer guzzlers from Brooklyn to Brussels to Bangkok and Bangalore.

In a nutshell, that’s the disruptive idea behind Bira91, a beer “imagined in India” but with aspirations to be one of the top 10 craft beers in the world in just five years, according to Ankur Jain, who I sat down with last week. Jain launched Bira91 just last year in India and it quickly became the top-selling “premium” beer in that nation, ahead even of Budweiser. It’s rolled out a witte and a blonde across six Indian cities while attracting rave reviews and fans on social media.

While Bira91’s tagline is “imagined in India,” the origin story actually traces to Williamsburg, “when it was still cool and inexpensive,” said Jain. Jain, born and raised in New Delhi, had moved to New York in 2007 to launch a tech start-up, when he fell in love with craft beer. “It was a very exciting time because I was building my first business in New York City. And Fridays, after a long week of work, I’d head to the Brooklyn Brewery to try their latest release.”

That same year, Jan sold his healthcare management business to a large hospital network in New York City and moved back to India. He had some money and some time as well as a problem. “The first thing that I noticed when I moved back, there was no beer worth drinking in India.” And so he started an import and distribution business based in Belgium and India. “I started importing some really interesting beers from Europe and the United States,” including Brooklyn Brewery Lager and Schneider-Weisse Tap 7 Unser Original.

It was during this period that Jain learned from his customers that they wanted an accessible beer, a little hoppy, but not too extreme. And not too high in alcohol. It was that profile that would define Bira: sub-5% ABV and a manageable 20s on IBU bitterness scale. And then Jain realized that these were the same sorts of lower-alcohol “session ales” that have been popular in Europe for a long time and were now trending in the United States. This beer style was also less offensive to India’s cultural aversions to alcohol. “There’s a big change in terms of perception toward lower-alcohol beverages like beer and wine in India right now. I think India is sort of the last large market where there is so much growth ahead of it.”

Nine years later, now his own brewing company’s harnessing some of the latest beer tech to brew beer in Brussels from Belgian and French malts, as well as Bavarian and Himalayan hops, for eventual worldwide distribution. What’s more, it’s a punk-monkey who likes to dress up and appeals to the global 20-somethings who the brand hopes to reach. Manhattan has become an important test ground for this globetrotting beverage, having rolled out earlier this summer at Comic Con and the New Yorker TechFest, as well as grabbing a spot on select taps around town.

There are many reasons that Bira91 is set up to be popular with the international tech-set: The web persona is mobile-first, the value-prop is about disrupting your standard beer and the flavor characteristics are explained on the bottles in data-centric, infographic terms.

In fact, Bira91 could also be the first brewery to get funded by a major Silicon Valley VC. The India outpost of Menlo Park–based Sequoia Venture Capital is an investor, attracted not just by the growth potential of India’s beer market but also some IP Bira91 developed for shipping and inventory tracking that brags superior keg technology, greater shelf life, lower cost to ship and minimal “foaming.” “We’re first to market with a packaging technology that could reinvent draft beer around the world.”