With Unique Tech, This Upstate Dairy Bottles the Closest Thing You Can Get to Raw Milk

Making milk coveted by Eleven Madison Park and Agern, Back to the Future Farm is the only New York dairy using a revolutionary pasteurization technique. 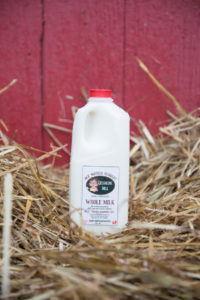 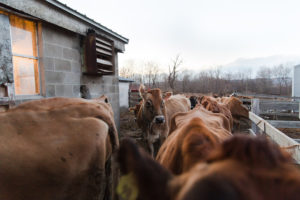 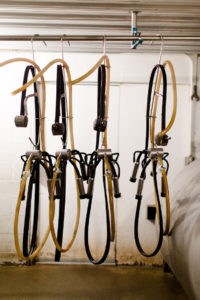 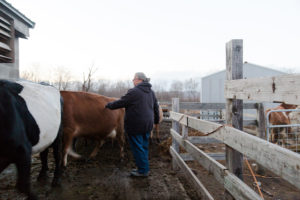 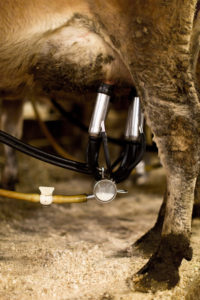 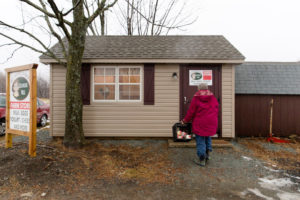 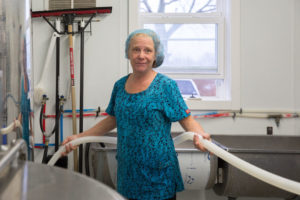 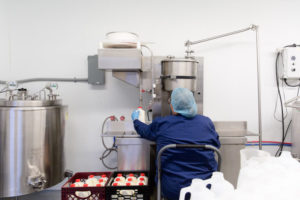 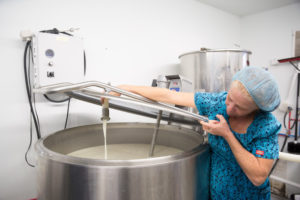 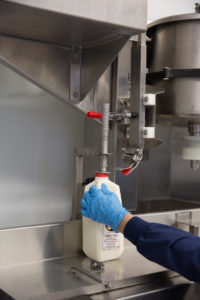 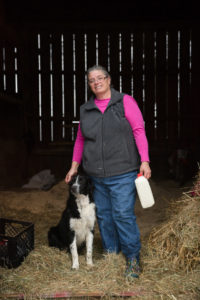 Trepidation would be an understatement for what I was feeling as I slipped and slid behind Rose Hubbert across “the frozen tundra” between the house and barn at her Back to the Future Farm in Orange County on a late morning in mid-December. I could sooner give up wine than milk, and I was about to come literally face-to-face with the source of my essential daily drink. In these days of ag-gag laws, did I really want to see where the essential white stuff comes from?

Shock number one was the smell. Or, rather, the absence of smell—dozens of cows were lined up in two rows, but there was not the faintest whiff of shit, let alone manure. Shock number two was the gentleness of those milk dispensers, with their sweet eyes and nuzzling noses (“careful—she’ll eat your scarf”), as a boombox played Toto’s “Rosanna” (“meet you all the way”) and about a dozen barn cats and kittens wandered between a metal bowl of milk in a corner and the heaps of hay and alfalfa Hubbert was raking to make the cows’ fodder more alluring as she warmly called out their names, from Rhubarb and Clara to Naomi and Lollipop.

I thought there could be no better evidence of contented cows providing milk fit to drink, but if that were the only story, I could have been on any number of upstate dairy farms, as evidenced by the growing array of local milk options in New York City stores that cater to shoppers who want to drink local at any price. The other element that makes Ole’ Mother Hubbert milk extraordinary was on display in a 12- by 24-foot portable shed next to the barn, a revolutionary computerized machine designed for small farms that pasteurizes milk just hot enough and long enough to be safe, without cooking out flavor and nutrients.

LiLi, for Low Input/Low Impact, was invented in Vermont with the intent of giving dairy farmers who are getting squeezed suicidally dry by middlemen a shot at taking control over their own product. Hubbert, the first farmer to invest in the system, can literally funnel milk directly from the teats into the pasteurizer and then into bottles to be sold in the honor-system shop on the farm or, more lucratively, at the Greenmarkets in New York City and to some of the best restaurants in Manhattan (can you say Eleven Madison or Agern?).

Big creameries also use what is known as HTST (high-temperature, short time) pasteurization but in necessarily huge production, blending milk from many dairies. More and more creameries are churning out ultra-pasteurized milk, heated to 200 degrees so that it has a shelf life somewhere almost near cream cheese. And much gets lost in the literal process.

David Barbano, a professor of food science at Cornell, says milk is affected by factors beyond pasteurization, but most of those would count as credits to Hubbert’s approach to dairying. Milk from one farm reflects the diet the cows are fed, unlike at creameries where the “flavor is averaged out over many farms.” Selling milk locally also has “a positive impact on freshness of flavor.” Maintaining a herd of cows of mostly one breed (like Jerseys or Holsteins) also concentrates the flavor. Finally, refraining from homogenization intensifies the taste.

No wonder Ole’ Mother Hubbert’s “creamline” milk is head-banging great, every sip a mouthful of richness and borderline grassy flavor. The supermarket stuff is pallid, almost watery, by comparison. 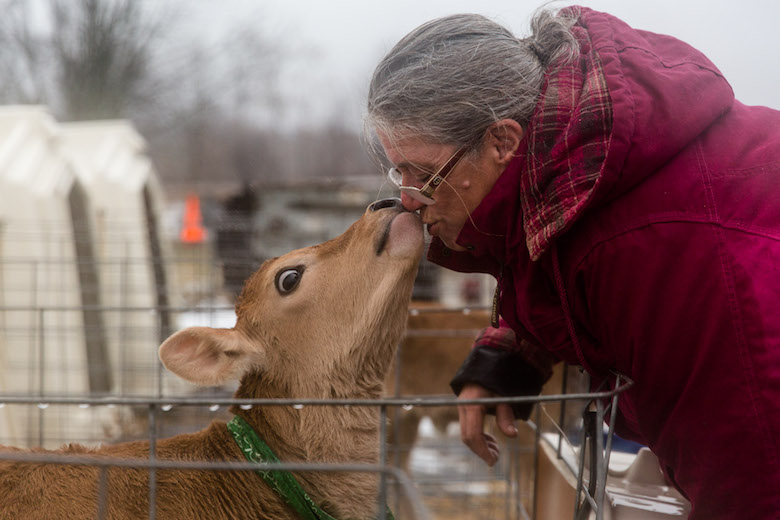 Hubbert rents out her plant to another farmer and also processes sheep’s milk for still other farmers to sell at Eataly in Manhattan, but otherwise everything bottled there is pridefully hers.

“My motivation is to make this a success to show people dairy farms are not as dirty or nasty as some media portray them,” Hubert says. “But you need to niche-market. You can’t ship to creameries.”

As she explains, milk prices are set by the government. “It doesn’t matter what fuel and hay cost. This is all you’re going to get. Right now that price is at $17 per hundredweight at the wholesale level. I get $66. I did this to prove that you can raise a family and be a small dairy farmer. I don’t have 1,000 cows or 500 cows or 350 cows. To me that’s too big. I have 75, oldest to youngest.”

Hubbert, who turns teary-eyed in talking about the five-year-old farm, says she also wanted her son, Joshua, now 12, to grow up tending to cows and chickens and turkeys (and, soon, honeybees). “I feel I’m raising someone with good moral values and work ethic.”

The herd is milked by machine, but other chores are done by hand. “Four times a day we scrape down the hay so they eat more.” Around 2:30 in the afternoon the cows are let out to exercise for a couple of hours. Beyond her “2,000-pound puppy dogs” in the barn, Hubbert keeps more cows in a windproof shelter and calves in hutches outside, with hay for bedding. In warm weather, some are pastured on 30 acres in nearby Middletown. She recently leased 157 more acres nearby and is getting the fields ready to become pastures.

Three years ago in April, Hubbert and her husband, Lee, took a risk in buying LiLi, which was designed by Bob-White Systems in Maine. “We were the guinea pigs, the first with an on-farm site. It was originally $75,000, but we got her for $65,000 for agreeing to be the beta site.” But they were taken with it because of the borderline-raw flavor it yielded. “We went and did tastings at a few creameries, and the milk was good but tasted cooked to me,” Hubbert says.

David Barbano, a professor of food science at Cornell, says milk is affected by factors beyond pasteurization, but most of those would count as credits to Hubbert’s approach to dairying. Milk from one farm reflects the diet the cows are fed, unlike at creameries where the “flavor is averaged out over many farms.”

With LiLi, milk is pasteurized at 161 degrees for 15 seconds, the least amount of time and temperature to meet federal regulations. By contrast, ultra-pasteurized milk is treated higher but faster, at 200 degrees for a couple of seconds, she says. “To me that’s over-processing. It not only kills the bad bacteria but all the good stuff, too. I don’t have to fortify my milk with (vitamins) A and D.”

Minimal processing and short travel are key—“the more you move milk, the weaker it gets.” A pipe from the barn conveys the milk into a tank in the plant, where it is gravity-fed very slowly into tubes in the LiLi. When it has cooled to 45 degrees, it can be bottled. A state inspector tests the machine every three months.

The milk is $3.50 a gallon in the farm shop run by the honor system but $4.50 in the city to offset tolls, Greenmarket rent, gas, wages and other expenses. (Buy 10 over time, though, and you get one free.)

Hubbert rents out her plant to another farmer and also processes sheep’s milk for still other farmers to sell at Eataly in Manhattan, but otherwise everything bottled there is pridefully hers. “If a label is on crooked, it’s my fault,” she says.

She and her husband, a former head chef at Catskills resorts, previously ran a tire and automotive warehouse, storage unit and small used-car dealership. “We were very successful at those three businesses, but then the economy tanked. We decided to invest in a young farmer,” providing equipment to process the milk. “That didn’t work, but we had a herd of Jerseys and moved the equipment onto a farm we’d leased.”

Now she is up at 3:30 a.m. and in the barn by 5:00, 7 days a week. Her husband runs their remaining business while “I deal with the processing, promotion, all the selling, organizing the deliveries.” She has hired an employee to cover the markets in Manhattan (Union Square on Mondays and Fridays, Abington Square and 82nd and First on Saturdays) and in Sunnyside, Queens, on Saturday. And she delivers to restaurants.

The yogurt store Greecologies in SoHo was her first customer, but Eleven Madison’s chefs soon also discovered her. “Then one day I’m standing in Union Square and this handsome man comes up, Joe Yardley (the chef de cuisine for Claus Meyer), and he says ‘I hear you have the best milk in New York City.’ We exchanged information, then one day I’m in the milk plant and guess who comes up. Joe Yardley. He goes out in the pasture to meet my girls, and next thing I know I’m delivering to Agern and Great Northern Food Hall.”

When asked, Yardley says, “I think Rose’s milk is one of the best examples I’ve come across of happy animals making better tasting foods. She treats her cows like her family and in return they provide her with some of the best milk I’ve ever tasted.”

Hubbert uses LiLi to process chocolate milk and gelato base as well even though it is designed only for regular milk. And she is saving money to buy a cream separator; as she says, a barista named Omar at the Great Northern Food Hall is the only one who can make her non-homogenized milk foam. If you have the enviable luck to wrangle a cappuccino machine at home, that is the one drawback to her amazing product.

When it comes to milk, maybe you can be too rich.