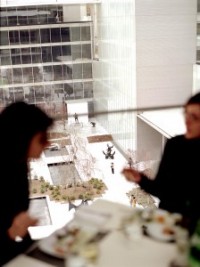 Terrace 5, the restaurant on the top floor of the Museum on Modern Art in New York, has changed its wine list to include only New York wines.

“We made the change for two reasons,” says Justin Tang, beverage manager for the museum’s two cafes. “We’ve got a very international clientele who aren’t as exposed to New York wine. And, on the  food side, we’re serving local cheese and local beers.”

The feedback so far has been great he says, with the customers responding to Bedell’s Taste White and the Wölffer Rosé. The staff favorite, he says, is the Palmer Pinot Blanc.

The majority of the list’s 18 wines come from Long Island and the Finger Lakes, with a couple from the Hudson Valley. Tang hopes to soon include wines from the Lake Erie region.

The restaurant has outdoor seating and a lot of the food on the current menu is light and pairs well with lighter wines. Different producers and different styles with change with the season, he says.