The hotel chain has been rethinking its food and beverage offerings in the last couple of years while attempting to offer more New York-made products. 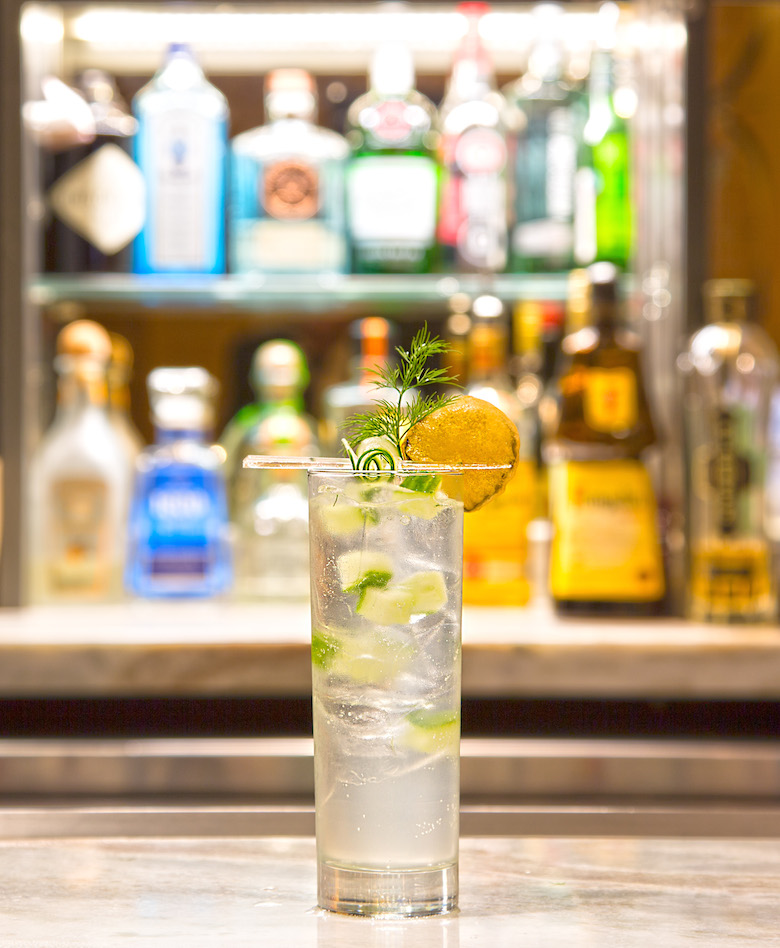 Mixologist Thom Caska cites his childhood in Brooklyn as his inspiration for this cocktail. Photo courtesy of New York Hilton Midtown.

Midtown Manhattan is not where you expect to find local anything. But, the Hilton Midtown is trying to buck that reputation, one cocktail at a time.

Take their Brooklyn Dill Pickle. The drink is a dressed-up gin and tonic, with local Brooklyn Gin, cucumber, lemon and fresh dill. With pickle in the name, one might expect saltiness, but since no brine is added, the only salt comes in the form of a fried Brooklyn Brine dill chip on the rim of the glass. It’s clean, refreshing and the pickle snack makes it satisfying, too.

Food and beverage manager/resident mixologist Thom Caska, came up with the Brooklyn Dill Pickle, citing a memory from his childhood in Brooklyn as its inspiration.

“When I was a kid, we would always go get the big dill pickles, so we kind of were playing around with the idea of a cucumber gin and tonic and we took it a little bit further by adding the dill,” says Caska.

Hilton has been rethinking its food and beverage offering in the last couple of years, making the bold move of eschewing room service and all table service dining options in 2013 in favor of a fast casual, grab-and-go concept instead.

The barrier for locally or artisanally made products to get into a hotel like the Hilton isn’t just that they are not necessarily carried by the larger distributors. Instead, the biggest barrier is often quantity. Both Caska and chef Richard Brown, who oversees all of the cooking going on in the hotel, remark that even if they fall in love with an item, small companies are often not ready to produce the quantity the hotel requires, so partnerships have to be carefully planned and considered.

Caska says that Brooklyn Gin, with its striking blue bottle, is easy for guests to spot behind the bar, and the company has grown enough to support large customers like the Hilton. Also on the menu at the Bridges bar is the classic Bronx cocktail made with New York Distilling Company’s Dorothy Parker Gin.

The men at the helm of both the kitchen and the bar are local boys with a bias toward supporting their home, so it’s likely this is only the beginning of Hilton serving more New York–made products.