Back in the day, some local revelers celebrated New Year’s by “going from House to House with Guns and other Fire Arms, and being often intoxicated with Liquor.” 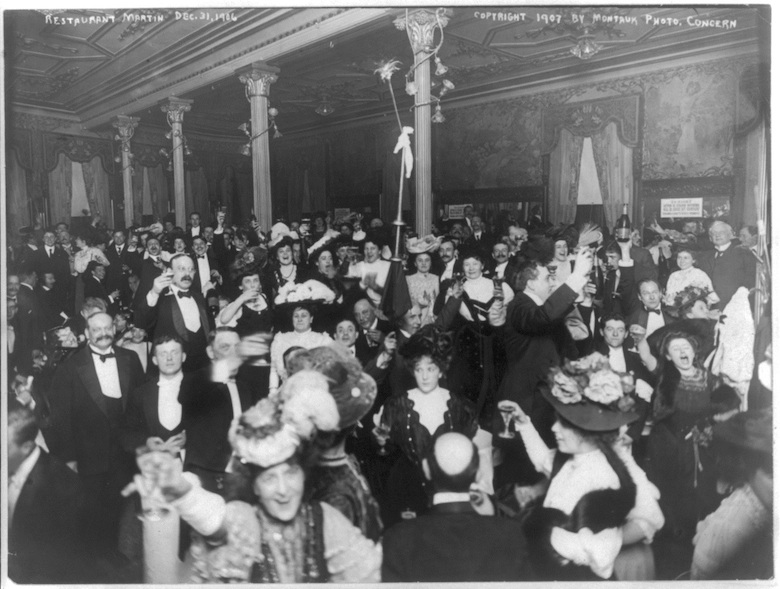 A large crowd celebrating New Year’s Eve at Restaurant Martin, December 31, 1906. Around this time it started to become more popular to celebrate New Year’s Eve rather than New Year’s Day. The tradition of toasting the new year and the old is evident by the number of cocktail glasses in the hands of the revelers. Photo credit: Library of Congress

The following is an excerpt from Savoring Gotham: A Food Lover’s Companion to New York City edited by Andrew F. Smith.

In the early years of the city’s existence, New Year’s Day was the main secular holiday. Both the Dutch and their successors, the English, exchanged gifts. It was a festive day of visits to the homes of friends, family, and acquaintances, and refreshments were served to all comers. Some revelers celebrated New Year’s by “going from House to House with Guns and other Fire Arms, and being often intoxicated with Liquor” — a practice that was recorded as early as 1675. Despite laws enacted to prevent such activities, and a doubling of the city police presence on the holiday, the tradition of celebratory shooting continued until the 1840s.

City residents also upheld the custom of New Year’s Day visits into the nineteenth century. New York City was the nation’s first capital of the United States after the passage of the Constitution. On January 1, 1790, President and Mrs. George Washington, whose home was on Cherry Street, were visited by Vice President John Adams and other dignitaries. Martha Washington served the guests tea, coffee, and cake.

For many, New Year’s Day was simply a day off from work and an occasion for drinking; by evening the streets were frequently littered with the semiconscious forms of those who had overindulged. On New Year’s Day in 1837, New York’s mayor, Cornelius W. Lawrence, graciously opened his home to the public. Gentlemen came, tendered their greetings, and left; a few drank “a single glass of wine or cherry bounce, and a morsel of pound-cake or New Year’s cookies,” reported diarist Philip Hone. Then less-refined visitors crowded in the door demanding their share of the refreshments. They devoured the beef and turkey, wiped their greasy fingers on the curtains, drank the mayor’s liquor, and discharged “riotous shouts of ‘Huzza for our Mayor!’ ” The police were called in to restore order.

There was drinking in the homes of the wealthy, too, along with sumptuous repasts that featured hot oysters, salads, boned turkey, quail, and hot terrapin. Hostesses offered their visitors rare wines, cognac, bourbon, and sometimes Champagne. An English visitor to New York City in 1870 found that eggnog was “the peculiar beverage of New Year’s day,” but guests might also be offered apple toddy, milk punch, brandy smash, and mixed drinks, such as the popular Tom and Jerry, a sort of eggnog spiked with rum and brandy and served hot. By the end of the nineteenth century, however, the temperance movement had found some traction among well-to-do New Yorkers.

When George Sala, an English writer, made his rounds on New Year’s Day in 1880, he was offered coffee, bouillon, and chocolate, but no alcohol. Temperance was not the only reason for the decline in New Year’s visits. According to etiquette maven Abby Buchanan Longstreet, writing in 1869, the “generous” hospitality of the past was “too burdensome, . . . with not even standing room in popular households.” The most fashionable New Yorkers were now escaping to their country houses for the holidays or celebrating in public.

By the 1890s dining out on New Year’s Day offered a welcome alternative to home visits. The traditional menu at the Fifth Avenue Hotel in 1897 included oysters, green turtle soup, terrapin, and, of course, New Year’s cake, while the city’s Hungarians feasted at the Grand Central Palace in 1899 with specialties like fish soup, veal paprikas, stuffed cabbage, and noodles and cottage cheese.

There was drinking in the homes of the wealthy, too, along with sumptuous repasts that featured hot oysters, salads, boned turkey, quail, and hot terrapin.

Over time, the focus of the celebration shifted to New Year’s Eve. For entertaining at home there were theme parties with games and supper. A 1904 manual, Entertainment for All Seasons, suggested a “turning over a new leaf” décor and a buffet of lobster Newberg, Newmarket sandwiches (chopped celery, hard-boiled eggs, capers), Neuchâtel sticks (celery filled with cheese), and snow pudding. But many revelers flocked to hotels and restaurants for more lavish suppers and Champagne toasts. New Year’s Eve was becoming a time to let loose publicly, with normal standards of behavior temporarily suspended. In advance of the December 31, 1907, festivities at Martin’s Café, a tony lobster palace, it was announced that the normal ban against “respectable” ladies smoking would be suspended for the evening. Newspaper accounts carried the story, reporting that many of the women were awkward, novice smokers. The publicity launched a vigorous debate over behaviors considered acceptable for women in public. Breaking rules was common: by 1921, the New York Times reported that despite the onset of Prohibition making selling liquor unlawful, Oscar of the Waldorf expected six hundred to seven hundred merrymakers who would presumably carry their own.

In 1910, the New York Times estimated that 100,000 men and women would be out and about, some 3,500 of them at four new restaurants, the Ritz Carleton, Rector’s, The Martinique, and Louis Martin’s. Taking advantage of New Year’s Eve in 1912, a smattering of hotel workers tried to strike. The job action was unsuccessful, but pointed to the importance of public, rather than private, celebrations of New Year’s. As high-end restaurant and hotel workers gained union representation in the twentieth century, they negotiated double pay for New Year’s work.

Beginning in 1904, street celebrations began to concentrate around Times Square, and in 1907 the first lighted ball was lowered on a flagpole atop One Times Square in a midnight countdown. The Times Square celebration became a national event with the advent of radio, interrupted only for two years during World War II, and a global celebration watched by millions after the arrival of television.

Beginning in 1904, street celebrations began to concentrate around Times Square, and in 1907 the first lighted ball was lowered on a flagpole atop One Times Square in a midnight countdown.

Today, an estimated 750,000 visitors and locals crowd Times Square to watch the ball drop and celebrate the incoming New Year. As watchers can’t take packages or bags into the Times Square area due to security issues, many visitors dine before or after the midnight celebration.

For those less inclined to brave the cold weather, many restaurants, clubs, and bars have special prix fix menus and many require advance reservations weeks or months in advance. One of the hallmarks of these restaurant meals is Champagne: more Champagne is sold on New Year’s Eve than on any other night. In anticipation of 2013, one of New York toniest restaurants, Eleven Madison Park, boasted a special rolling cart of Champagne that circulated through its dining room on New Year’s Eve, teasing dinners with its offerings that included the coveted Krug Grand Reserve. Others invite guests over to their home or apartment. Still others stay home, enjoy the proceedings on television and sip Champagne at the appointed time.

When the clock strikes midnight, New Yorkers like to welcome in the New Year with a glass (or more) of Champagne and the singing of “Auld Lang Syne.”