The most recent plays off of ‘Waitress’ while previous collaborations include ‘Hamilton’ and ‘School of Rock.’ 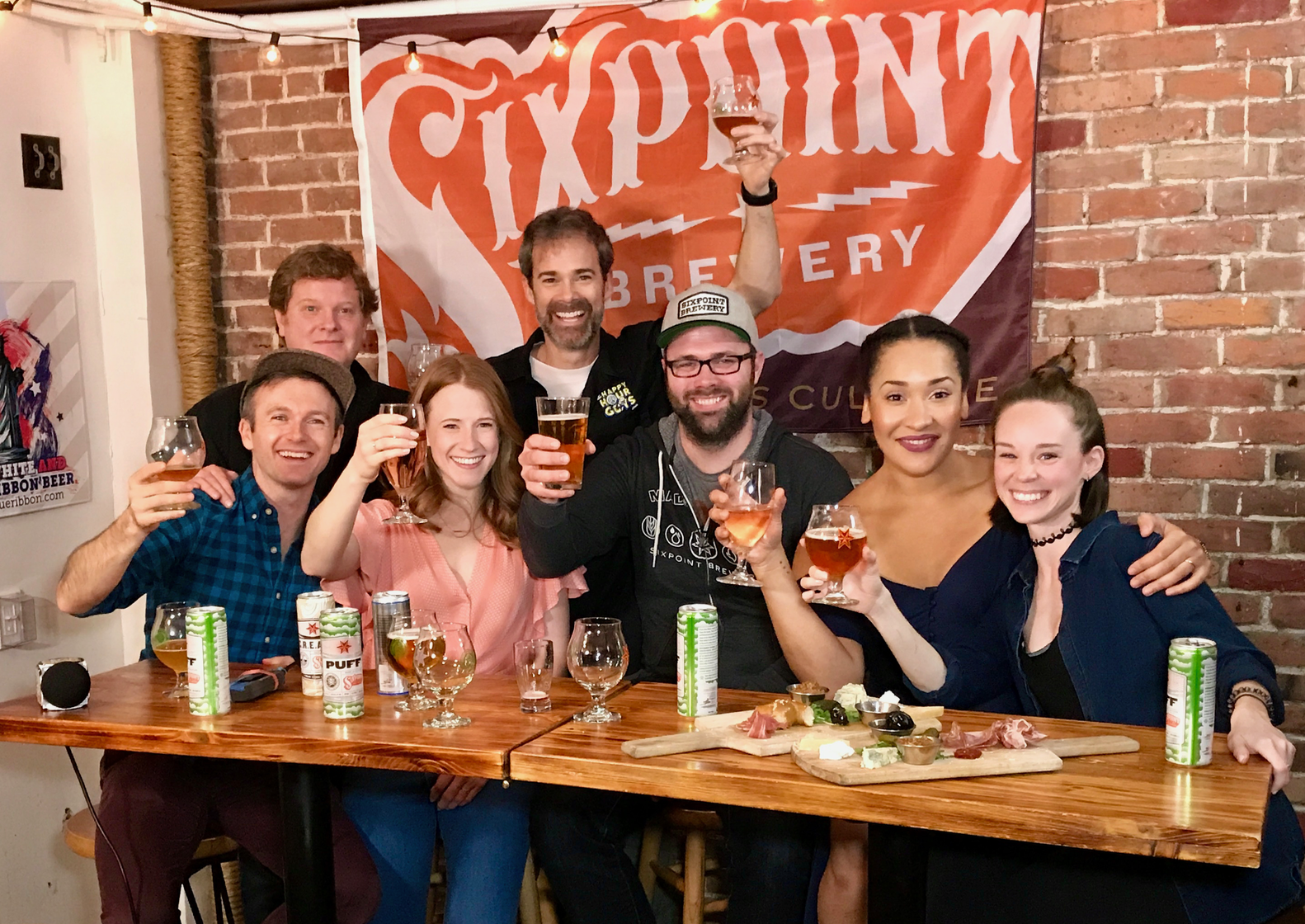 ‘It’s for Adrienne’ Cherry Cream Ale is the work of Sixpoint Brewery, based in Red Hook, and “Waitress,” the musical about a waitress and expert pie maker who feels trapped in an unhappy marriage. Photo courtesy of the Happy Hour Guys.

Can you imagine Elder Price double dry-hopping a double IPA during a door-to-door sales pitch in The Book of Mormon? What about in The Lion King, Simba mourning the loss of Mufasa by starting the mash of a maibock? While brewing beer likely won’t be incorporated into any plays or musicals currently on Broadway, some of them are teaming with local breweries off the stage to create beers for charity, as part of an exciting project started by James Ludwig and Mark Aldrich.

Ludwig and Aldrich are the creators and hosts of “The Happy Hour Guys,” a long-running travel web series that follows the friends as they visit bars, breweries and distilleries around the world. The men are also both Broadway actors and last year began brainstorming, as Ludwig put it, “how to get craft beer some work on the main stage.”

“We saw a lot of parallels between both of these worlds we work in,” added Aldrich. “Both are true crafts, and both have passionate fan bases. Beer lovers will stand in line for hours for a great brew and Broadway lovers will do the same thing to score tickets to a hot show.”

The result, called the Broadway Brews Project, is a series of collaborations between local breweries and hit shows to create limited-release beers, the latest of which, ‘It’s for Adrienne’ Cherry Cream Ale, arrives in bars in and around the Theater District (along with a few outer-borough outliers) next week. These special suds are themed in relation to the partnering show and benefit a charity of the show’s choosing. In addition to managing the collaboration, Ludwig and Aldrich film the entire process for their own show, which has aired over 340 episodes since 2006.

‘It’s for Adrienne’ Cherry Cream Ale is the work of Sixpoint Brewery, based in Red Hook, and “Waitress,” the musical about a waitress and expert pie maker who feels trapped in an unhappy marriage. It’s adapted from a 2007 film written by Adrienne Shelly, who was tragically murdered before its release. As such, a portion of the proceeds from sales of the beer will benefit The Adrienne Shelley Foundation, a charity founded by her widower that supports women filmmakers.

After seeing a performance of “Waitress,” Keir Hamilton, a brewer at Sixpoint, was inspired by the scent of baking that perfumes the Brooks Atkinson Theater nightly, an olfactory extension of the show’s set achieved as a result of production baking an apple pie using a convection oven just outside the entrance to the theater’s orchestra seating. 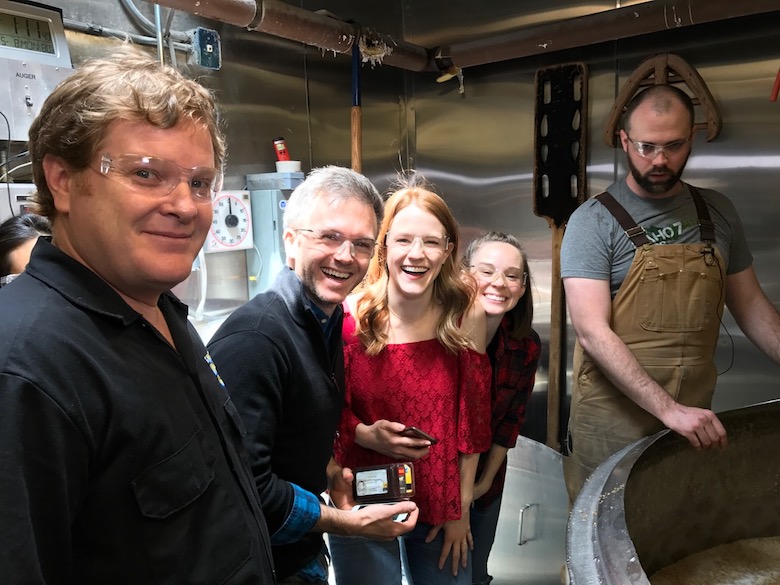 In addition to helping develop the recipe, the actors visited Sixpoint’s facility in Red Hook on the morning of May 8 to participate in the brew day. Photo courtesy of the Happy Hour Guys.

With the sumptuous aromas of warm crust and fruit baked into his mind, Hamilton met with Ludwig, Aldrich and three cast members (Caitlin Houlahan, Molly Jobe, Olivia Phillip (not pictured) and Jeremy Morse) to noodle on the notion of a tasty tribute to pie in liquid form. Over drinks at Beer Culture, a bar in Hell’s Kitchen that will carry the special brew, the team devised a recipe for a cream ale with lactose and cherries that would be kettle soured, a technique that can impart sour flavors in a fraction of the time traditional methods historically require. “The lactose for some sweetness, a little tartness from the kettle souring, and the cherries added near the end of fermentation for another aspect of a dessert pie,” Hamilton explains.

In addition to helping develop the recipe, the actors visited Sixpoint’s facility in Red Hook on the morning of May 8 to participate in the brew day. “They each took turns raking out the spent grains from the mash tun and then together added the lactose,” Hamilton said. “We made sure not to ask them to do any singing that day.”

For the finished product, Hamilton said to expect “an easy drinker, balanced between sweet and tart with a cherry blast, like a creamy beer pie to the face.”

The first of three episodes documenting the development and creation of ‘It’s for Adrienne’ Cherry Cream Ale, the third Broadway Brews Project beer, was released on The Happy Hour Guys’ website earlier this week. Additionally, you can watch episodes covering the other two installments. The first teamed the Bronx’s Gun Hill Brewing with “Hamilton,” culminating in a rye-spiked saison called Rise Up Rye that, due to high demand, has prompted several subsequent batches. (Cans are even sold at the Richard Rodgers Theatre, where the smash rap-driven musical about America’s founding fathers plays nightly to sellout crowds.)

The second, meanwhile, partnered New Jersey’s Carton Brewing with “School of Rock” to make one batch of an imperial black IPA, called School of Hops.

The goal of the project, Ludwig said, is to create three more beers and rerelease them together as a six-pack. “Six beers, six shows and six great charities,” he said.