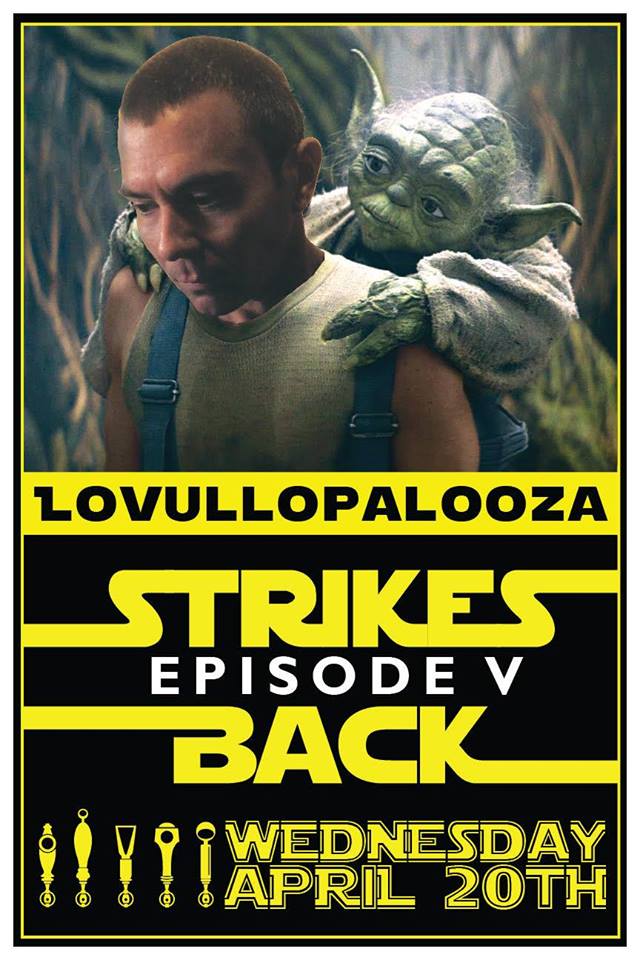 Mike Lovullo, the special brands manager at Union Beer Distributors, has celebrated his birthday in a particularly awesome way since 2012: He organizes a fun event with stellar beers of all kinds at the Blind Tiger Ale House. It’s called “Lovullopalooza.”

In somewhat of a curatorial role for the beloved bar and undisputed event powerhouse located on Bleecker Street in the West Village, Lovullo is given complete control to assemble Blind Tiger’s 28-draft lineup—not including three different cask ales—for his annual shindig. It’s become a favorite among local beer loons for several reasons including Lovullo’s known passion for craft beer and solid reputation within the industry. “I consider him the heart and soul of beer in this city,” Katherine Kyle, Blind Tiger’s general manager, told me.

Lovullopalooza will return to the Blind Tiger for the fifth time on April 20 (see the full beer list here), so we spoke with its creator over the weekend:


EM: What’s the first birthday party you remember having?
Mike Lovullo: [A few seconds of silence.] I think I just made this huge connection between my past life and my present life.

EM: What do you mean?
ML: I went to the Fuddruckers in my town for my eighth birthday. I remember the [Fuddruckers] had this long row of soda taps. I remember me and my friends went down the line hitting every tap—Coke, Dr. Pepper, whatever—and we mixed them all in one big cup. After we filled it to the top, we all tried to get one of us to drink it. But no one wanted to. I feel like that’s what Lovullopalooza is in some way—me putting together a bunch of sodas and asking people to come drink and party for my birthday. Except it’s not soda; it’s really great beer. And people come to drink it.

EM: How did the idea for Lovullopalooza originate?
ML: I’ve been Tiger’s beer rep for a while now, and I was a regular at the bar even before that. A friend who works for another beer distributor had hosted an event for his birthday there and I thought it was cool that he got to pick all the drafts for it. I remember shortly after asking Dave [Broderick, Blind Tiger’s owner] and Katherine why couldn’t I do something like that.

EM: What did they say?
ML: Something to the effect of, You never asked us. [Laughs.] So it was on at that point and my goal was simple: just make a beer list that I would find exceptional.

EM: What do you remember about that first event?
ML: Needing a lot more time to plan it. Now, between doing it for a few years and there being more breweries around, it usually takes me three or four months to make the list. But at the beginning, and this was only a few years back, there were far less local breweries; and the outside breweries I wanted featured wouldn’t send beer to the city as often. It was a lot tougher.

EM: How do you start assembling the list every year?
ML: I usually make a rough list of what I’d like to have and start contacting breweries. Availability plays a big role, so if I know a certain keg won’t be around again until after the event I make sure to have it set aside. I also keep in mind my favorite breweries and the styles they’re known for. Then it’s a series of follow-up meetings and calls to finalize it. The Tiger has always been really cool about allowing me to do my thing; they’re very open to let me order whatever.

EM: When did you start making this year’s list?
ML: The first beer I added was last September, which I think is the earliest I’ve ever started. Funny thing is, I’m still waiting to hear if it’ll be in on time.

EM: What’s the beer?
ML: Let’s just say there are a lot of factors at play getting a keg from Alaska to the city, but I always do my best getting something big and malty from these guys. But I will say that right before we got on the phone I confirmed a keg of Hitachino’s Dai Dai IPA with Sansho peppers. It might be the first keg ever tapped. I’m stoked.

EM: Are there any breweries that you try to always have at the event?
ML: To pick a few: Hitachino, The Bruery, Maine Beer and Allagash. I have tattoos of Allagash’s and Maine’s logos, so it’d be wrong not to include them.

EM: What about beer styles? Do you favor any styles over others?
ML: Sours and IPAs are generally the crowd favorites, so we have a number of those. And when it comes to IPAs and the whole freshness factor, I just leave some holes on the list and fill those in a few weeks out depending on what’s available. But with having 28 draft lines to play with, I definitely try to feature a lot of everything: big stouts, old ales and so on.

EM: Do you tend to feature heavily from Union’s portfolio of breweries?
ML: There’s definitely a fair amount of [breweries from Union] on it, but I use all the resources I have to make the best list I can. I think it’s important to say that I’ve made a lot of great relationships with the breweries I work with, and with the breweries I love to drink. Craft beer is all about community. And that’s why I’ve been able to get some rare offerings for this.

End the day with the Double Negative from Grimm Ales, gold medal winner at the 2015 Great American Beer Festival. This sought-after American Double Imperial Stout from the Brooklyn-based brewery Grimm Ales has put them on the map, with flavors of coffee, chocolate and black currant. (10% ABV) Credit @odetovine

EM: How would you describe the atmosphere on the day of the event?
ML: The crowd is always a mix of the Tiger regulars and my industry and non-industry friends. Some of my family members make the trek from Jersey which is great.

EM: How has the event evolved over the last five years?
ML: I’d say the list has gotten a lot more heavy on sour beers, with there being a lot more sour styles available and a lot more producers making them. It’s also gotten a lot more local/regional. Looking through this year’s list now, I’d say 80 percent of the beers are from the Northeast.

EM: Are there any beers you tried to get this year, but couldn’t?
ML: There’s a lot of good beer out there now that I don’t think it’s worth harping on the ones you can’t get.

EM: What about you? How did you start in the beer industry?
ML: When I moved here a little over ten years ago I was already very much into craft beer. Then I started taking pictures for Ale Street News, started going to a ton of events, and I saw how much fun the reps were having. So I decided to make the career change. I was actually a middle-school teacher for the NYC Teaching Fellows before I joined Union. That was in August of 2007 and I haven’t looked back.

EM: Can you describe your position at Union and a typical workday for you?
ML: I have a specialty portfolio of breweries and a few cideries that I sell to accounts in Manhattan and the Bronx. I try to focus on one area per day, but with the limited supply of what we get and the high demand for it I usually have to bounce all around the city. It’d be cool to just stay in one area at a time, but I’m not afforded that privilege. Still, it’s one of the better gigs in this industry.

EM: Lastly, since the event’s name is a riff on Lollapalooza, if you could choose one song to be the official theme of Lovullopalooza, what would it be and why?
ML: [Laughs.] Oh, man. I’d have to go with my all-time favorite party song: Lionel Ritchie’s “Dancing on the Ceiling.” Even before he gets into the lyrics you hear a cheering crowd and then Lionel—the man, by the way, and don’t let anyone tell you any different—screaming, “Wooh!” The whole song’s about everyone having fun together and that’s what this party at The Tiger is all about.

Before we ended the interview, we asked Lovullo to pick and discuss three beers on this year’s list:

Pretty Things Beer and Ale Project, Our Finest Regards
I first met Pretty Things owners Dan and Martha [Paquette] at a Beer Advocate festival in Boston when I had just started with Union. I remember telling them that I worked for a beer distributor and that I loved their Jack D’Or saison. They soon started distributing in New York and one winter night I still recall sharing a bottle of their Our Finest Regards with a few friends. I consider myself a traditionalist when it comes to barleywines and prefer English examples that aren’t as hoppy as American versions and Finest is exactly that! Still to this day it’s my favorite American-made barleywine and though they’ve sadly closed, I’m very happy to be pouring one of the last kegs in existence.

Sloop Brewing, Escher College Poster
I just discovered Sloop this past fall and shortly after me and a few co-workers went upstate to their beautiful farmhouse brewery. In addition to enjoying the foliage, we were able to have a test batch of a Flanders red ale that they had made a few years back and it was amazing. When I saw the Sloop owners a few months ago I asked if they had a keg available for the event. They said I could have the only keg in existence under one condition: I had to name it! I’m flaking on the show I drew inspiration from, but there was an M.C. Escher poster in a college dorm and I pointed out to my roommate at the time that I had one of those. So there you have it.

The Bruery, Blue BBL
The Bruery’s marketing and sales manager Ben Weisse came to the city during Beer Week a few weeks back and while we were drinking Jardinier—that’s their light and hoppy Belgian blonde ale that’s one of my favorites—at an event, I commented that one of the first pours of it, if not the first pour, was at Lovullopalooza last year. So then he asked what I wanted for this year. I told him the list was getting a little heavy with strong ales and sours so Ben thought to offer something combining the two. Blue BBLs is a 15.9 percent ABV blend of Bruery’s bourbon barrel-aged imperial stout and their bourbon barrel-aged sour stout, plus an addition of blueberries. In retrospect I’ve always had something from The Bruery on my list and I’m really stoked to have this very special offering.