Orange Is The New White

Up near Niagara, Leonard Oakes Winery’s interpretation is putting this tannic, peppery, amber-hued wine on the New York map. 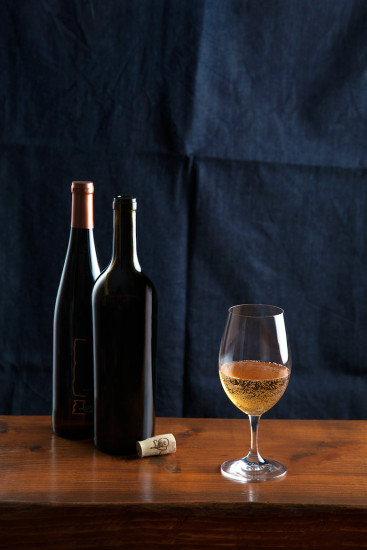 Heads up, wine nerds: Your new favorite orange wine isn’t from Slovenia, or even California. It’s from the Greater Niagara.

Leonard Oakes Winery stands an hour east of the famous falls, where fourth-generation farmer Jonathan Oakes, 32, has been winemaker since 2007. The winery is known for dry and off-dry rieslings, as well as sparkling Steampunk Cider, made with 13 varietals of apples. But after attending a talk by traveling wine consultant Clark Smith, Oakes became interested in orange wines.

For the uninitiated, orange wines are made from white grapes fermented on the skins. They have a centuries-long history in the Central European country Georgia and the northern Italian region Friuli, where they were traditionally made in clay amphorae buried underground. Today they’re experiencing something of a rediscovery, beloved as versatile, complex, somewhat challenging wines whose tannic structure and long finish make them good pairings for heavier foods like roast chicken, creamy dishes or even red meats.

In his talk, Smith lamented how technology and mechanization have led to clean, sterile wines, and he called for a revival of amphora wines made in an amber or orange style. Intrigued, Oakes took inspiration from two Friulian winemakers, Radikon and Gravner, who led the orange wine revival in the 1990s, resurrecting the traditional amphora method.

For Oakes, making an orange wine was about pushing the limits of New York’s white grapes — seeing how complex they could get. “In New York State, we don’t see too many big whites, and we’re still kind of playing the single-varietal game,” he explains. “So this was an attempt to see, structurally, can I build a bigger white?” Made with late-harvested vidal blanc grapes, Oakes’s orange wine is fermented for five weeks on the skins, and lees-stirred, resulting in a floral, slightly rounder approach than the Friulian versions. After punch-downs for further extraction, it sits a year in the tank. With just a hint of funk, the wine bears those signature black tea notes and tannins that make orange wine so ideal for food pairing. Vidal blanc was Oakes’s choice because, he says, the thick skins make the grape hold up well on the vine, while retaining acidity.

The wine finished bottling in March and should be hitting the market as you read this. Next Oakes plans to make an orange wine from the second pressing of skins from his ice wine, letting it sit on the skins for a year to get the fullest extraction.

Oakes considers drinking orange wines to be a serious endeavor. “You have to spend time with it,” he says. “It’s a whole process, which to me is the soul of what I think we all look for, this ethereal experience that touches on something more than just drinking.”