While the subjects in this issue take certain traditions seriously, they can’t help but play with them, too. 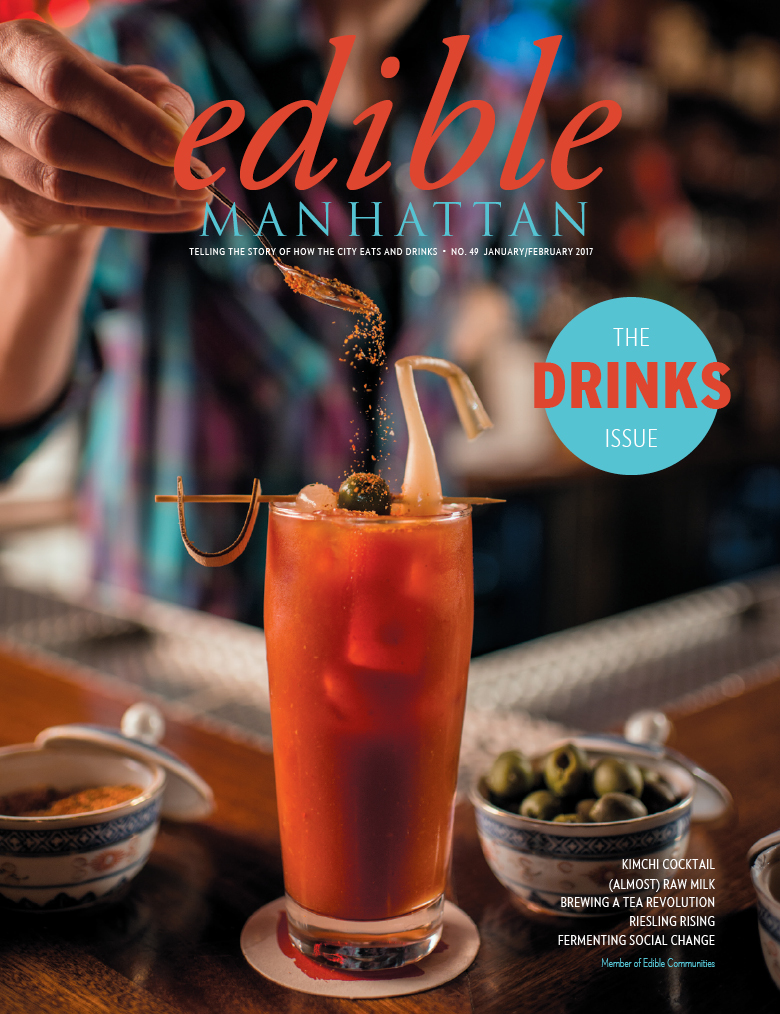 Writer and friend Matthew Karkutt and I recently went to a bar for “research” (swear). We conducted our important field work at Insa: a Korean BBQ and karaoke hot spot in Gowanus where the brunch-only Bloody Mary comes spiked with kimchi brine made from the chef ’s own family recipe.

A wise person once said, I think, that one cannot know a place by its brunch alone, so I’ve happily returned to Insa three times this month. What I admire most about it, in addition to the food and drinks just being simply delicious, could be said for all of the subjects in this annual drinks issue: While they take certain traditions seriously, they can’t help but play with them, too.

Consider the city’s growing community of avant-garde tea dealers. As Rachel Safko describes, there’s a new breed of shops who succeed at serving relatively obscure teas according to centuries-old traditions in ways that feel approachable and modern. At the snug Té Company in the West Village, for example, you can enjoy a perfectly brewed rare oolong alongside an anchovy- and mustard-coated watermelon radish tartine made by a former Per Se chef.

Eileen M. Duffy also reminds us of a classic example of New Yorkers honoring a custom while also making it their own. Upstate winemakers have long been known for their exceptional North American rieslings and she spotlights a few top-notch bottles. Not far away in the Finger Lakes, Larissa Zimberoff directs us to Eve’s Cidery, a crown jewel of local orchards and cideries that also riffs on European traditions to make groundbreaking New York State blends.

Further south in the Hudson Valley, our associate editor Alicia Kennedy shares how the landmark 2012 New York Farm Brewing Law bolstered Indian Ladder Farms into becoming one of our region’s foremost commercial hop growers. Regina Schrambling then heads west to showcase Back to the Future Farm, another pioneering operation using novel pasteurization technology—the only one of its kind in New York—to bottle and sell the closest thing you’ll get to raw milk at the market.

Within city limits, Alicia takes us to Sunset Park to learn about an actually drinkable and enjoyable fernet borne of a nerdy dare between distillers. Across Kings County, Oliver Roeder makes his Edible debut with a profile of the city’s first-ever meadery.

Liz Clayton shifts gears to explore the ways in which some of the city’s most imaginative bartenders use local, seasonal ingredients—root vegetables included—to enliven winter cocktails and mocktails. Always eager to do things ourselves, though, we asked Cheryl Paswater to detail the art of secondary fermentation for us home kombucha brewers. Think of her tips as a way to dial your buch’s flavor up a notch.

Our issue concludes with a surprisingly opportune although not-so-drink-related story. Last fall I had the privilege of interviewing Evan Wolfson, a proud New Yorker who is widely considered to be the leader of the successful marriage equality movement. We met at his West Village apartment to learn about his personal tastes (he keeps regular office hours in old-school diners) and discuss a topic that feels as timely as ever: how social change can happen.

As we wrap up this issue on a particularly cold January evening, I’m delighted to share stories that put our community’s creativity, ingenuity and downright good taste on full display. I hope that you make the time to try these drinks for yourself, and if you end up returning for seconds, or thirds, I certainly won’t blame you.