Wait Until It Passes Bright 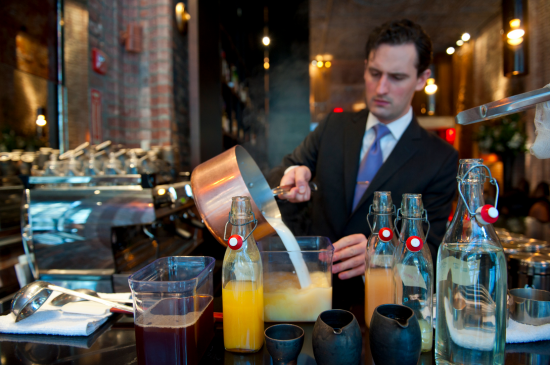 Rockey packs a punch. The young barman fell for the arcane 18th-century cocktail and took it upon himself to revive it. “Making milk punch became an obsession for me,” he said.

It was 5 p.m. on the nose—the early side of when a man should start drinking in earnest—when I ordered a clear milk punch, the arcane 18th-century cocktail that fell into disuse before it was recently resurrected by Eamon Rockey, who with Bryce Shuman runs Betony, the outstanding new restaurant on 57th Street.

“My theory is that milk punches developed in the late 1800s as a method of preservation,” explained Rockey, a handsome 28-year-old from Colorado. At the time, refrigeration was scarce and fresh fruit even more so. Milk punch, in which milk, tea, citrus and alcohol are blended, could last for months uncooled.

Betony’s cocktail list is a dozen strong, but the milk punch perhaps best embodies Rockey’s ethos: “Whenever we provide anything to someone,” he said, “whether it comes from the bar or the kitchen, it should be its most pure and expressive form.”

And so this milk punch is the most pure and expressive form that milk, citrus and tea could possibly take—while not resembling anything you’d think a combination of those liquids would look like. That seems to be at least part of Rockey’s point: Sometimes the most pure version of a thing is not the most apparent. 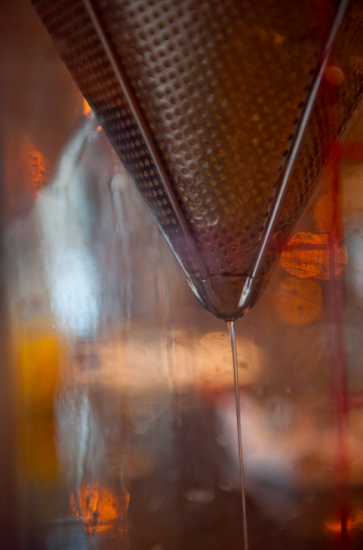 Painstaking. “The most difficult milk punch” involves straining milk, double-brewed tea and fresh citrus juice through cheesecloth for 10 to 12 hours.

Both Rockey’s parents were chefs, and restaurants remain his playground. While dining at the Bar Pleiades on the Upper East Side, he discovered the resurrected milk punch, which bartender Cameron Brogue had rescued from extinction. But when Brogue moved to Vancouver, milk punch was again lost to society. So Rockey, who had in the meantime worked at Eleven Madison Park and opened Compose, took the burden on himself.

“Making milk punch became an obsession for me,” he said. At Compose, which became Atera, and later at Aska, he was always experimenting with the drink. “I would read these old recipes and I always wondered, ‘What do they mean, “wait until it passes bright”?’ Then I realized, it means I need to clarify the liquid.”

But the process of turning opaque milk, dark tea and bright citrus into so pure and clear a liquid is a time-consuming process, one that Rockey now undergoes nearly every week. Clarification is never a cinch and this—“the most difficult milk punch I’ve made”—involves straining the heated milk, the double-brewed tea and the fresh-squeezed juice through cheesecloth for 10–12 hours, until the liquid emerging from the strainer is completely clear. One jostle or nudge along the process and it’s back to square one. 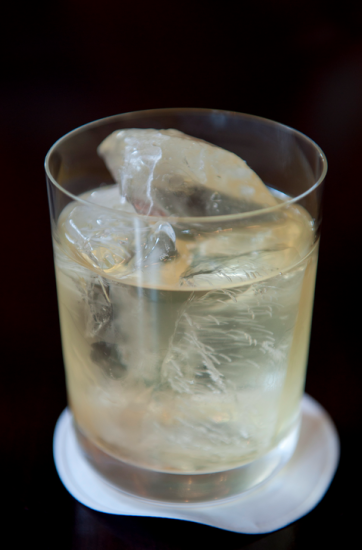 Clarified. Betony’s cocktail list is a dozen strong, but the crys- tal-clear milk punch perhaps best embodies Eamon Rockey’s ethos: that everything “should be its most pure and expressive form.”

It’s a process that gives Rockey ample time to contemplate his mission at Betony, which opened in May and which Esquire declared restaurant of the year. “The perfect cocktail,” Rockey said, “should elicit in anybody who drinks it an emotional reaction. I’ve tried to commit my life to the idea that we can find things that resonate with people who are not in possession of our memories.”

Soon Rockey had launched on a long reminiscence about his grandfather. “My grandfather and I used to go camping in the mountains of Colorado,” he began, and wound through the facts of his grandfather’s life from his profession (surveyor), to his smoking habits (Camel unfiltered), to his drinking habits (beer) and even to his grandmother’s predilection for salad. “She was a fanatic about having salad on the table.” It seemed, I thought, overshare-y.

But as I watched, Rockey was building another drink on the menu, an Old Dog Shandy, and as he slid it across the bar he said, “I love my grandfather. But I am not an architect. I can’t build him a building. I’m not a sculptor and I cannot sculpt a statue. So how do I tell the story? This cocktail is how.” The Shandy contained Canard Noir porter from Greenport Harbor Brewing Company (recalling what they drank together), finished with house-smoked honey and soured with sherry vinegar (grandmother, salad) and a spray from a moonshine-and-Virginia tobacco tincture (Camels, unfiltered). I never knew the man Rockey called Papa but the love his grandson felt for him—a love tinged with nostalgia and weekend camping trips—was clear. Which brings us back to the punch.

“Select your spirit,” the spare menu instructed, so I did: white rum, to better preserve the clarity. Rockey poured a pellucid liquid with a slight golden hue from a stoppered bottle into a crystal stirring glass over a handful of handsome perfect cubes of ice. Was that the punch, I wondered, but didn’t ask. Then he decanted a long, satisfying stream of white rum into the beaker, stirred the entire thing with a long-handled silver spoon, strained and poured the liquid into a tumbler over a few more ice cubes. At 5:30, he handed me my milk punch, I had a sip and exclaimed, “Oh, that’s extraordinary indeed.”

Both in taste and presentation, total ice-melting mind blow. The drink looked like some advertisement for Iceland or at least for general frigidity. It was nearly clear through the frosted glass, and as it warmed and the frost disappeared, the shafts of frozen air in the ice cube painted some insane wintry portrait in an otherwise completely clear liquid. It was so beautiful I didn’t want to drink it but so delicious I did.

Inside every milk, there’s a crystal clear milk punch, waiting to break free. What an edifying thought.

Watch the condensed version of the milk punch process in our 15-second video here.