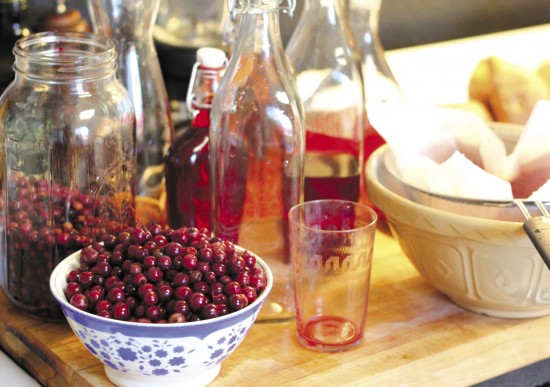 Deep into the cold months I comfort myself with booze. My foraging proclivities have been telescoped to the discovery of oyster mushrooms in forests bereft of green. Leaves are still months away. It is true that I have been sniffing and sipping in the interim, assessing, but I have held myself back. A concerted imbibing of my foraged infusions starts only when I know there is no hope of fresh ingredients until well into the warming year.

In tall Mason jars of bourbon, gin, vodka, Calvados and Cognac are last year’s foraged flavors, trapped. Garnet, scarlet, amber, sepia. And not only trapped, but transformed — and waiting to be released in increments to the chilly embrace of the cocktail shaker. While I eke out the most precious liqueurs (I never have enough sumac vodka, for instance), I make free with the black cherry bourbon. In late summer this native fruit is so abundant that an hour of collecting nets enough to make this my most-used infusion.

Some of the professional gardeners I know describe the black cherry tree saplings that spring up all over the city as a woody nuisance. They pop up in formal rose gardens and in containerized rooftops, in manicured cemeteries and in Central Park’s perennial beds. Gardeners can’t weed them fast enough. Birds love the fruit and carry it with them, and urban raccoons and possums spread the love on the ground.

The parent trees are planted by the city to shade the grid, and are also found in parks and empty lots, and in sunlit patches of urban forest. Black cherries are adaptable. They favor disturbed ground and tolerate poor soil. Unlike many successful weeds, Prunus serotina is not an import but native to the eastern part of this continent, occurring from Nova Scotia to Texas and Florida, and spreading as far as South America. The New York Metropolitan Flora Project, initiated by the Brooklyn Botanic Garden in 1990 to document all flora found within 50 miles of New York City, established that black cherries dominate the woody landscape.

This makes my foraging heart glad.

The trees become briefly conspicuous in spring, when their graceful white flowers are borne in fragrant racemes that appear once the leaves have formed (unlike their ornamental cherry cousins whose blossoms appear before foliage emerges). The fruit occurs in pearl-size drupes, hanging in twinsets from pendulous strings. In late summer they turn a matte crimson before softening and ripening to glossy black. Personally, I like the raw flavor, which is distinctly bitter with undertones of darkness. The pit is large, relative to the amount of edible flesh, so eating a quantity takes a certain resolve. More reward lies in making jelly or fruit leather — or in the marzipan richness of infusions I have come to love, requiring little more than a rinsing-off and a drowning in liquor.

Last season’s black cherry catch has been reclining in bourbon with the addition of a little sugar. I did not know, when I screwed the lid on summer, that I was performing an act of Americana. I learned later that the instructions for making a cordial called Cherry Bounce were found in a note, written in an unidentified hand, in a diary belonging to Martha Washington (what was it with that family and cherries?). It prescribes cinnamon, and more sugar than I use, but otherwise my 2012 infusion is pretty much the tipple sipped by George on his quixotic trek west to unite the coasts by way of the Potomac River, in 1784.

A gorgeously dark-red six o’clock cocktail is black cherry bourbon, lemon zest and juice and Noilly Prat vermouth, the infused bourbon rolling into cool season citrus and bitter herbs. In my winter kitchen the cyanide present in the pits is the source of the intense, bitter almond nose belonging to any cherry infusion, and this presents some pairing challenges — I associate marzipan with sweet inflections.

But bring on the pig, an animal made for fruit: pork loin roasted with winter sage leaves from my cold-bitten terrace cozies up to a reduction of the bourbon with shallots and a hit of sherry vinegar. Slow-cooked pork belly meets wild cherry–soaked apples, now roasting together to a sticky and plummy finish.

And duck: Breasts are seasoned in a marinade of the bourbon and fresh thyme, and added to a smoking pan which is later deglazed with the liquor, joining tender slices of quince that have been poaching with shredded leeks.

Dessert: Grated orange zest macerates in the bourbon, which is stirred into whipped cream for a syllabub, and left overnight to separate prettily in individual glasses. Over heat I whisk into a fluff a yolky sabayon that turns tea-colored as the emulsion thickens.

Thin crepes are turned in a sauce of butter, black cherry bourbon and sugar, and set aflame — then topped with sour cream and toasted almonds. A compote of prunes with red wine and the bourbon oozes juice atop a pillow of bourbon-whipped mascarpone. Divine. Baba au black cherry bourbon? Yes, please.

Best and simplest of all, perhaps, after a wintry cheese fondue-for-two, are slices of sweet farmers market apples dipped into a small glass of the liquor, and bitten off the tines of a proffered fork.