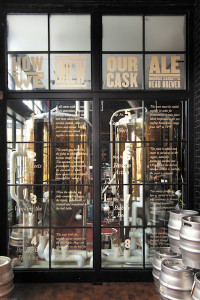 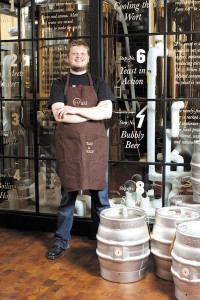 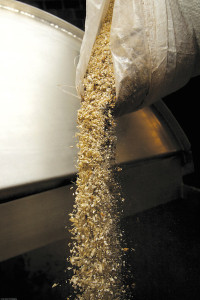 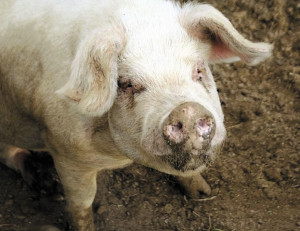 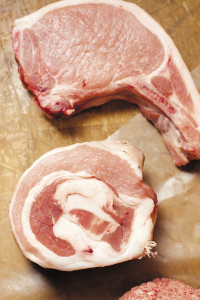 Eataly’s in-house butcher shop is a meaty marvel. The left end of the case displays pork of every fashion—chop, ground, sausage, shoulder, braciola, meatball mix and so on, enough pearly fat and rosy muscle to make your heart go pitter-pat (or mine, at least). A sign conveys the kind of sourcing information enlightened eaters have come to expect: that the meat is from heritage-breed pigs raised right upstate. But Eataly could include a unique footnote: “by way of Birreria,” because that pork is in part produced 15 floors up.

Birreria is the latest restaurant to open at Eataly, and the in-house (well, atop-house) brewery is represented on the ground level in name only. After checking in at the host stand, diners are directed to elevators shooting them up to the 15th floor to soak up a little rooftop ambience and enjoy hearty food and craft beers created by head brewer Brooks Carretta.

Brooks was born in the States but grew up in Rome. And when in Rome, one drinks wine, not beer. But Brooks caught suds fever on a trip to Belgium where he was delighted by the wealth of strong, complex beers available, mainly of the cask variety—those low in carbonation and served at room temperature. Back home in Rome, he searched in vain for similar craft beer, and ultimately did what so many have done before and since: He started brewing his own. The difference? He’s now a brewmaster—and not just of his own basement.

Brooks soon outgrew the self-taught model and decided it was time to learn from a pro. He contacted Leonardo di Vicenzo, founder of then-new craft brewery Birra del Borgo (about 60 miles outside Rome), landed a gig and got serious about a career in beer. He went on to hone his hoppy craft at Delaware’s acclaimed Dogfish Head Ales under the tutelage of celebrity brewer Sam Calagione. Three years after Brooks called Birra del Borgo, his first two beer bosses, Leonardo and Sam, along with Teo Musso of Birra Baladin, became partners in Eataly’s Birreria, which is how Brooks ended up on that rooftop, brewing beer and making some spectacular pig feed in the process.

I visited Brooks there, and learned that the brewing basics are completed in three steps. Grains and sugar are cooked in water and then strained; hops and other flavorings are added to the liquid, which is cooked a little longer and strained again; and finally, the liquid is fermented with brewer’s yeast for several days, resulting in the finished beer that is then stored and served from casks.

During my visit, Brooks was brewing a beer called the Wanda and offered me a taste of the version he’d made the previous week. It was dark with a heady chestnut aroma that was undeniably Italian. As I sipped, he explained that cask ale is “a live beer. It changes by the hour,” which made me want to stay another hour and try it again.

Beer makes the meal at Birreria, and here that axiom is figurative, but it’s also a fact. While brewers typically toss out spent grain when its infusion is through, the grain that flavors Birreria’s beer lives on for a perhaps even higher calling: to flavor the pigs at Arcadian Pastures, up in Sloansville, New York, whose grain-kissed flesh later graces the Eataly butcher case in the form of all those delectable sausages, chops, belly and loin.

Brooks enjoys the daily interaction between beer and food, often collaborating with chef Alex Pilas to develop new beer recipes and pairings for Birreria’s menu, and putting heads together with head butcher Hank Balle. It was through those interactions that a different kind of pairing came about, and his beers were introduced to some very lucky pigs.

Last spring, after talking with Brooks about his bumper crop of beer grain, Hank was shopping at the Union Square Greenmarket and approached farmers Debi and Laurent Danthine of Arcadian Pastures with the kind of proposition that doesn’t take much time to answer: Would they be interested in receiving free spent grain for their pigs and then selling the resultant pork to Eataly? Hank and the Danthines weren’t the only parties to benefit. As it turned out, the pigs were big fans of the mix of malted and roasted barley and roasted chestnuts that Birreria served up.

Each week, when Brooks brews a batch of beer, he opens the door to the mash tun (one of the copper kettles in his rooftop workshop), and steam rushes out carrying with it a sweet waft of something like oatmeal. He sweeps out over 200 pounds of aromatic, soggy grains to be bagged and delivered to Arcadian Pastures, about a three-hour drive northwest from Manhattan, where Laurent and Debi’s herd of Gloucester Old Spot pigs take to them like a herd of hedonists at the Eataly charcuterie counter.

Laurent and Debi are used to trying new things. They met as teenagers, when he was an exchange student from Belgium, placed by chance in Debi’s best friend’s house. After years of visits back and forth, and then living abroad, the Danthines settled back in the States and started a family as well as a construction business. But when Debi was diagnosed with breast cancer, they took a hard look at what they were eating and where it came from—and what they discovered made them start raising their food themselves. Debi fully recovered and they dove headfirst into farming, finding it to be hard, hard work but incredibly rewarding as well.

They raise Belted Galloway beef cattle, laying hens and horses, but the pigs enjoy pride of place. Arcadian Pastures is named after the Greek word for “rural paradise” and the Old Spots spend their days in hog heaven—the scrubby, semi-wooded expanse that is the farm’s version of the “back 40,” leisurely clearing the landscape of invasives as they root and forage with their stubby snouts, while a dozen or so munch away at a trough.

Which is where they meet Eataly’s largesse, or shall we say, loan. While the pigs feast all day on natural forage and hay, they clearly dig those Eataly grains—occasionally augmented with mash from Brooklyn’s new Kings County Distillery. The aroma is strong, sweet and vaguely alcoholic. The pigs thrive on the diet, and by about eight months, they tip the scales at 250 pounds apiece—at which point it’s time for Eataly to receive the return on its investment.

When Hank received the first experimental pork from Arcadian last June, he gave it rave reviews and quickly arranged for standing spent-grain deliveries—and more pork orders. The farm is now on target to sell Eataly about 100 pigs in the next year. Although the farmers say they don’t notice a particular difference in the flavor of the meat or the quality of the fat, the butcher praises its creamy texture and says he believes the spent grain makes much of the magic. Laurent’s not indifferent to the benefits of the exchange, though. He appreciates putting waste materials to productive use—like all good farmers do.

After all this learning, it was time to get to the mangia part of the story. The proof is in the pork chop, so I brought one home. Hank is right about that creamy fat—the thick band of lard shined, promising to render out into a delicious base for caramelizing some onions and apples. With just a dash of salt and pepper and some dried sage for a rub, I slid the chop into the oven along with diced butternut squash. Sure enough, that silky fat soon yielded a clear, porky base for my frying pan, where the last local apple on my counter transformed into a browned sweet-and-salty relish to top the chop.

I didn’t taste the grains in every bite—nor did I get that whiff of beer that emanated from the trough those pigs tucked in to—but it was some excellent meat, made all the better by the knowledge that for each week’s pork sales, another 200 pounds of one man’s trash had become another pig’s treasure.