While wholesalers might offer everything from fenugreek to whole turmeric, Junoon chef Vikas Khanna doesn’t settle for other people’s imports. He travels to India himself every month or two, bringing back as many spices as he can carry. 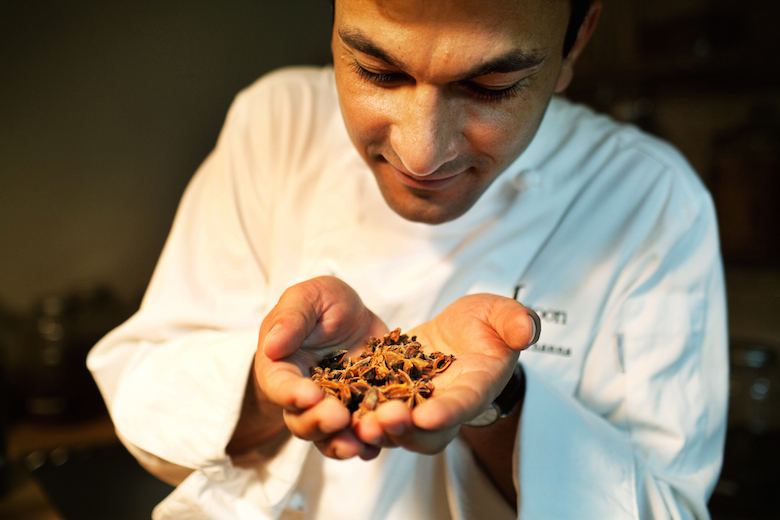 Centuries ago, trade routes carried exotic spices from India around the world; today some of those paths lead to the Flatiron, just west of Madison Square Park. Housed behind an imposing hand-chiseled black limestone facade perfect for a Mughal fort or maharajah palace lies Junoon, an opulent Indian restaurant that serves haute subcontinental cuisine.

Inside, the combination of old-world Indian artistry and boom-era elegance continues. While you wait for a table, take a seat at the long obsidian bar or in one of the antique, hand-carved Burma teak swings in Junoon’s glowing, coppery lounge and order cocktails like the Spice Trail, a martini riff featuring garam masala–infused vermouth.

While wholesalers might offer everything from fenugreek to whole turmeric, Junoon chef Vikas Khanna doesn’t settle for other people’s imports. He travels to India himself every month or two, bringing back as many spices as he can carry. Each morning at the restaurant he roasts and grinds them, each blend tailored for that day’s dishes. For example, the Madrassi blend packs the heat of chile powder and cumin, but when it’s destined for dessert, he includes extra ginger and cinnamon and very little cumin.

Khanna learned to cook alongside his grandmother. A heavy brass mortar and pestle was one of her most treasured possessions, and she taught him the importance of slowly roasting the spices before grinding them. By age seven, Khanna knew he wanted to be a chef.

He worked in the kitchens of the who’s who list of Indian hotels—Taj Group, Oberoi and Leela Hotels of India. In 2000, he moved to New York and, over a period of six years at Salaam Bombay, worked his way up from busboy to chef. In partnership with New Delhi native and Café Spice tycoon Rahesh Bhardwaj, Khanna opened Junoon at the tail end of 2010 and also has a hand in the Café at the Rubin Museum, where he cooked for President Obama in May. Voted New York’s hottest chef in an Eater poll, his good looks have cast him numerous times on screen, including in the series Holy Kitchens. His spice-forward cookbook for home cooks, Flavors First: An Indian Chef’s Culinary Journey, was published last year.

The chef’s spices aren’t tucked away in a cabinet or walk-in, but rather are given their own room, past Junoon’s reflecting pool and down a flight of stars in a spice shrine that looks less like a storage space than a temple. Shelves hold jars and bags of brightly colored ingredients—pomegranate seeds, star anise, fenugreek leaves, and treasured threads of red saffron. On a butcher’s table lies his grandmother’s masala dhaba—or traditional spice box—filled with cardamom, clove, turmeric and a chile blend.

But his single favorite spice is the Tellicherry peppercorn—“at least a little goes into almost everything we make,” he says. “Its aroma is intense, and it serves as a base for the other spices to mingle on top. Indian cuisine without the black peppercorn is unthinkable to me.” He also prizes its versatility. To wit, the pan-seared pineapple with fennel crème anglaise in his book calls for two teaspoons Tellicherry peppercorns, coarsely ground.

Khanna knows each spice—and its source—the way locavore chefs know their heirloom apple connections. “There is a man named Sandeep Kumar who I always buy Pippali pepper from,” he says. “It has the most haunting fragrance.”