According to an article in the August 19, 1900, New York Sun, down on Wall Street “the brokers themselves got to buying ice cream sandwiches and eating them in a democratic fashion side by side on the sidewalk with the messengers and the office boys.” 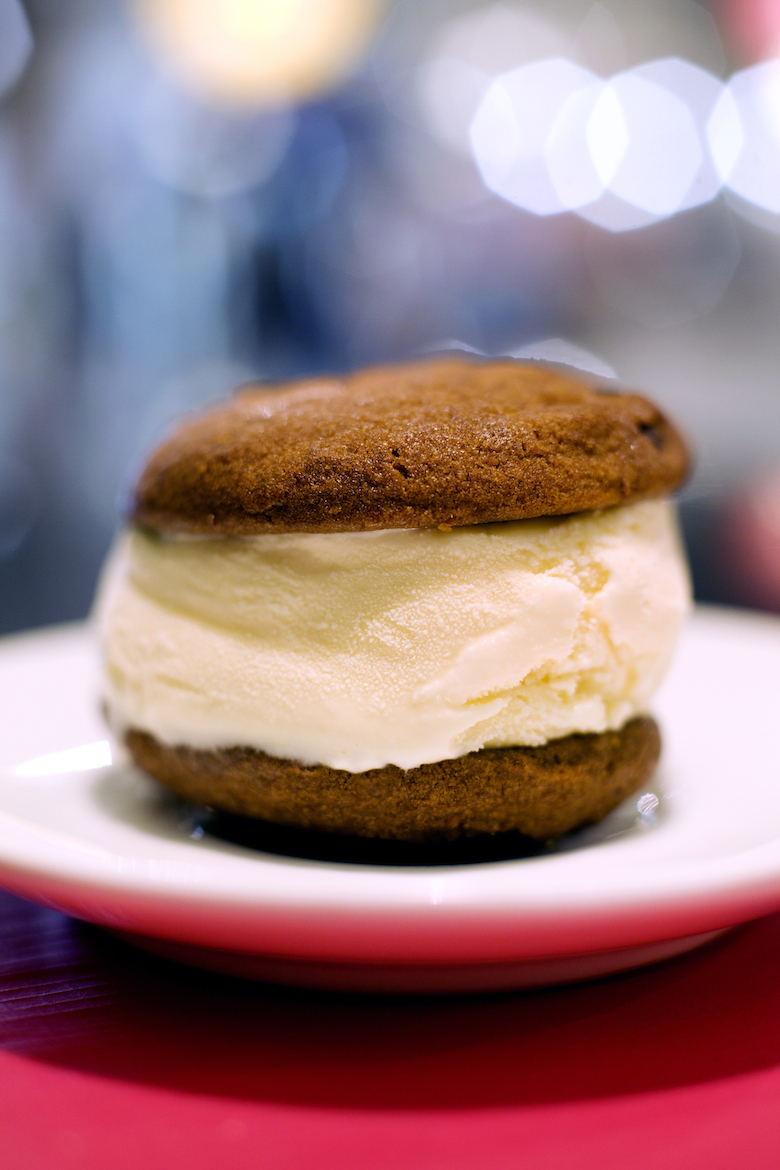 The confectioners dished out scoops to ladies and gentlemen in fashionable ice cream parlors, or molded ice creams into the shape of pineapples or asparagus spears to be served at elegant dinner parties.

Out on the street, vendors scooped their ice cream into “penny licks,” glasses the customers licked clean, so to speak, and then returned to the vendor, who then washed the glasses by swishing them in a pail of water before filling them up for the next customer.

Another sidewalk option was more portable, and destined for greatness: a frozen sweet called the “hokey pokey”—a small slice of ice cream about two inches square and half an inch thick, tucked into a piece of paper to give the customer something to hold onto. Then an anonymous vendor on the Bowery had a better idea. It was so good, it made the news.

“A New Sandwich,” the New York Mail and Express headline circa 1899 announced. The article states:

Like the double-crusted confection itself, upper and lower strata of society were united by the sweet street treat—at least at first.

According to an article in the August 19, 1900, New York Sun, down on Wall Street “the brokers themselves got to buying ice cream sandwiches and eating them in a democratic fashion side by side on the sidewalk with the messengers and the office boys.” Another story reported that everyone from bootblacks to bankers had taken to the new sandwiches.

But the elite indoor eateries were quick to dress up the pedestrian confection for their upscale clientele. They served the sandwiches on plates, with ice cream forks, and even atop lettuce leaves.

The Country Gentleman, published in Albany, reported in its July 4, 1901, edition that “one of the up-town restaurants” was serving ice cream sandwiches. The writer stressed that they were “quite different from the article dear to a newsboy’s heart, sold from the street vendor’s carts.” Rather, the restaurant’s “dainty” sandwich was made with diamond shapes of “delicate sponge or cup cake, neatly cut and with all the brown edges removed.”

But on the streets of Manhattan, the proletariat treat was selling faster than mortgage-backed securities. Some accounts declared vendors couldn’t take the time to make change. Customers had to pay with a penny.

It wasn’t long before capitalism itself developed a taste for the icy invention. As entrepreneurs sought profit, ice cream sandwiches took on some hallmarks of industrial production. A 1901 New York Sun article reported that they were assembled with “cracker holders,” tin contraptions that sped output and offered machine uniformity. A patent for a mold that made “two, three or more” sandwiches at a time was granted in 1916.