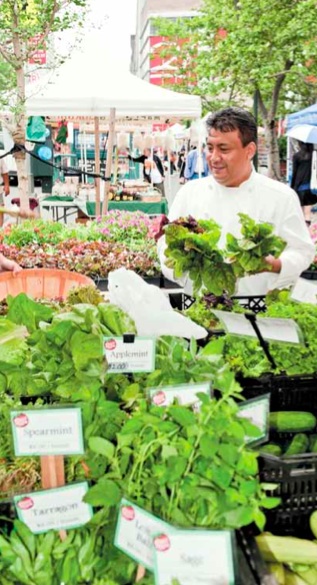 When city chefs boast about their Greenmarket bounty, they almost always mean the summery stash they scored at Union Square and schlepped across town in a cab. but at the Upper West Side’s Nick & Toni’s Café, chef Juan Juarez has another take that’s entirely appropriate for eaters watching their food miles: Hit the market in your neighborhood.

Greenmarket operates a whopping 25 locations in Manhattan alone, literally stretching from our island’s southern tip (at the Staten island Ferry Terminal) to the northern (in Inwood, just off Fort Tryon Park). Sure, some are small—Union Square offers 80 stands on Saturdays, while neighborhood markets might host only a half-dozen—but the quality is still spectacular and it just feels right to buy local food in the ’hood.

So each Thursday and Saturday, Juarez, who’s chef de cuisine at Nick & Toni’s, walks to the Tucker Square Greenmarket, held on a triangle of cobblestones at 66th Street and broadway, across from Lincoln Center, and just a block from his restaurant. Compared to Union Square, the lineup is little, but it’s hardly lacking. The diverse fruits and vegetables here can go toe to toe with the fare at 14th Street. This outpost even offers Hudson Valley duck, bobolink cheese and a maple syrup stand.

“We only go down to Union Square to fill in the gaps,” says the restaurant’s assistant general manager, Richard Scoffier, citing extra-large arugula orders, or a specific squash variety called “sweet dumpling” they seek out in fall. “[but] the Tucker Market is where we prefer to buy. Much better to go around the corner than ride the subway with carts full of veggies! Then the neighborhood folks are eating the same things in our restaurant as they do at home.”

When Scoffier started stocking up at the Stokes Farm stand three years ago, his Saturday spree always included 10 big bunches of basil, and farmer Ron Binaghi figured he was a neighborhood home cook with a serious pesto habit. “i just thought he was a guy on the street, a regular customer,” says Binaghi, who admits he was baffled by the man’s appetite for herbs.

Now the two are in communication all week. Binaghi likes to take cell phone pictures of new crops and send them from the field to Scoffier for a sneak preview: Strawberries coming soon! Or, garlic next week!

“It puts a face to it,” says Scoffier. “He sends me pictures of a little bunch of lettuce, with little clippers next to it. One week in the spring he brought me just two pieces of asparagus, so we were the first ones to try it. It brings me very close to it, as close as we can get living in the city.”

Chef Juan loves locally grown ingredients. (“The food is fresher than the big companies that ship it from California. I don’t like that kind.”) but he also finds it gratifying to shop alongside his restaurant customers. Many say hello—even from a distance the Nick & Toni’s crew is tough to miss with their produce purchases piled high.

“They definitely notice three guys with a wheely cart,” laughs Scoffier. “The chef is in his chef’s coat, and it’s kind of comical sometimes to see the amount of stuff we’re rolling down the street, teetering along to bring it over to the restaurant. Thursday you need the stuff for Thursday and Friday—it’s busy—and Saturday you need the stuff for the weekend to last into the week.”

That includes a standing Saturday order for free-range eggs from Knoll Crest Farm, up in Dutchess County, whose owners were initially reluctant to try out the market.

“We’ve sold at Union Square for many, many years, but Tucker was new for us,” says Knoll Crest partner Elizabeth Ryan. “I was highly skeptical, to be honest. I thought, ‘look at that tiny little market. Who’s going to go to buy eggs at Lincoln Center? People going to the opera are not going to buy eggs.’ The first day we went to Tucker, the guys from Nick & Toni’s came over and said, ‘We have to have your eggs.’ And then i was, like, ‘OK, this is good. Awesome. They get it.’”

“People in the neighborhood know the Tucker Square Market,” says Scoffier. “So they look at the menu, and when it says ‘Stokes Farm’ or ‘Hudson Valley duck’ or ‘Knoll Crest eggs,’ they recognize it because they eat [those ingredients] at home. That becomes a very direct connection. People know exactly what those names are. We send people to market and the market sends people to us.”