As with so many tech start-ups, alcohol delivery companies’ raison d’être is convenience. 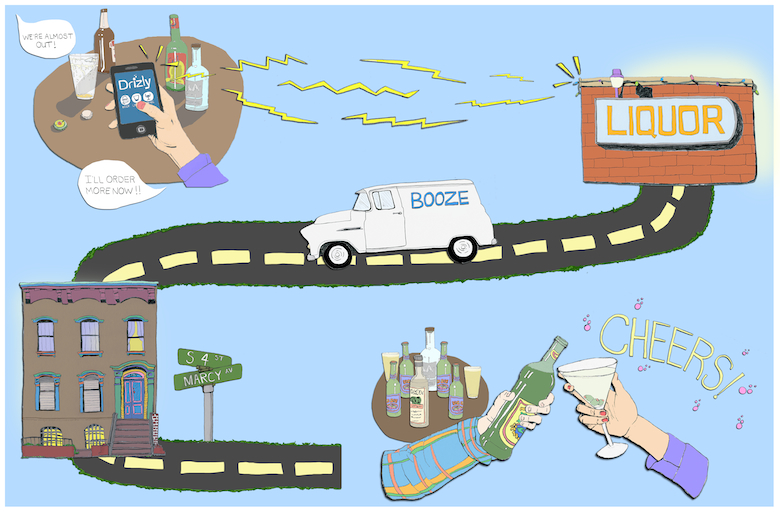 Bring it on. “There isn’t a ton of technology or investment in highly regulated industries like alcohol, tobacco and gaming,” says Drizly cofounder Nick Rellas. “That was an opportunity.” Illustration credit: Gabrielle Muller

It’s a soggy spring evening and I could really use a drink. But I need to make dinner and after a long day, the last thing I want to do is trek through the rain to pick up a bottle. Luckily, spirituous salvation can be delivered to my door, thanks to several companies that function as sort of Seamless-meets-FreshDirect, but for alcohol rather than takeout or groceries.

I pull up Drizly.com, the largest of these young ventures, which launched in NYC in early 2013. The site asks me to enter my address and then presents me with dozens of inebriating options for my Williamsburg neighborhood, ranging from a $10.99 Harpoon IPA six-pack to a $199 bottle of Dom Perignon. As with Seamless, there is no delivery fee, and at no point do I pick up the phone. Everything — including tipping the bringer of the booze — is done online.

I settle on a bottle of Brooklyn Winery Barrel Fermented Chardonnay. As with FreshDirect, I can schedule my delivery for now, or in one-hour intervals for later today or sometime tomorrow. Obviously, I need this wine right now. I click “Place Order” and immediately receive a confirmation e-mail, followed by a text message informing me that my order is on its way. Minutes later, my doorbell rings.

A shaggy-haired hipster wearing a beanie and a gray trench coat stands in the hallway, holding out a black plastic bag. Handing me my wine, he takes a look at my ID. “Cool, have a nice night!” he says, turning to leave.

It’s as easy as that. 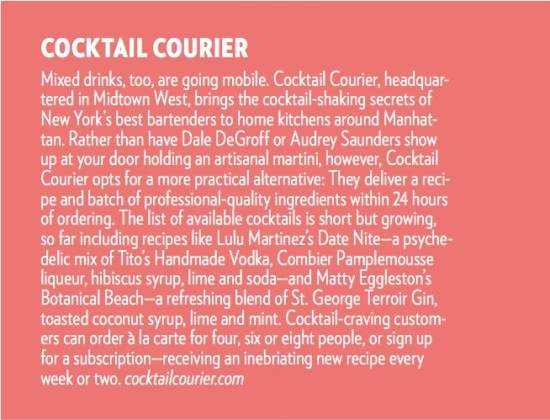 From start to finish, the entire transaction took 24 minutes — less time than it would have taken me to get dressed and drag myself to the liquor store, and with no extra cost, save the delivery tip (well worth it!).

As with so many tech start-ups, alcohol delivery companies’ raison d’être is convenience. But whereas services and goods ranging from laundry to household cleaning to do-it-yourself jewelry have already been given the start-up treatment, adult beverages have lagged behind — likely due to the many legal hurdles.

“There isn’t a ton of technology or investment in highly regulated industries like alcohol, tobacco and gaming,” says Nick Rellas, co-founder and CEO of Drizly. “For me, that was an opportunity.”

Each state or city presents unique hurdles for alcohol deliverers to overcome. To break into a new market, start-ups must prove to regulators that they are operating as an extension of the liquor store rather than an independent seller, and that the people with the liquor licenses are doing the actual sales and delivery. The start-ups themselves never touch alcohol or customers’ money. Instead, they act as matchmakers, connecting drinkers with bottle shops. To make money, they either charge the stores a flat fee — calculated using a range of variables including average number of sales and distance delivery persons must travel — or take a small commission on each sale.

The person delivering the booze must verify that customers are of legal drinking age, either by taking a look at their ID or, in Drizly’s case, using a portable proprietary ID verification system. Contrary to what you might expect, the majority of sales take place in the late afternoon or early evening on weekends, rather than late at night, indicating that people are planning for parties. Company-sponsored events also prove to be big sellers.

Rather than see alcohol delivery as a “disrupter” — as Silicon Valley types are so fond of saying — Rellas insists that Drizly is just the opposite. “We’ve banned the word ‘disrupt,’” he says. “Whereas Uber says ‘Change the laws,’ we say ‘Enforce them.’”

The purpose of alcohol delivery start-ups, he says, is not to break the system but to find ways to make it more streamlined and profitable — a win-win for both customers and purveyors.

Rellas isn’t the only one who stumbled onto this intoxicating idea. Ultra, headquartered in Hell’s Kitchen and currently delivering all over Manhattan, Brooklyn, Astoria, Long Island City, Jersey City and Hoboken, soon followed on Drizly’s heels, and both companies have seen a steady growth in business since 2013. Additionally, several other similar companies — Minibar, Swill, Thirstie and Drink Fly — have begun operating in the city, with still others handling the West Coast.

While the services aren’t available in every NYC neighborhood (the Bronx, Staten Island, much of Queens and some parts of Brooklyn are still dry on delivery) or in every city around the country, they’re expanding fast, and competition within the niche is growing. Between the various companies, more than a dozen other cities around the country now enjoy alcohol delivery — including Chicago, Denver, Austin, Seattle and Los Angeles — and by the end of 2015, Drizly and Ultra both plan to be operational in 30 or more markets.

These companies are finding ways to stand out from their competitors. While Drizly is now based in Boston, Ultra’s NYC location inspired its creator, Aniket Shah, to emphasize locavore offerings. 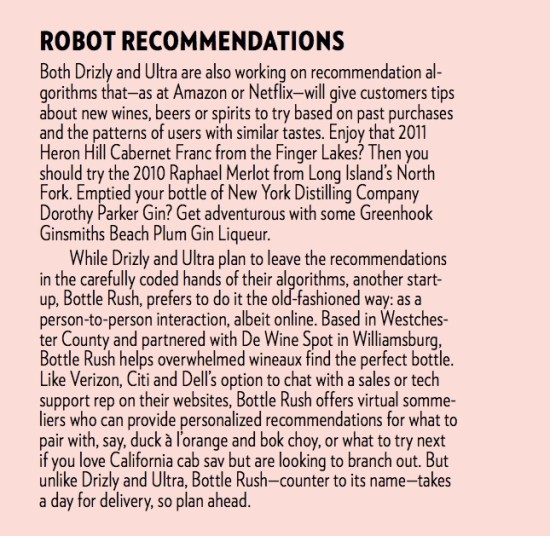 “Being a New York City-based company, Ultra focuses on supporting and promoting New York-based winemakers and distillers,” he says. “The Finger Lakes and Long Island are producing some outstanding wines, and distilling activity in the Hudson Valley is rapidly increasing.”

Ultra’s website highlights local products and allows users to filter searches for New York bottles. Customers like it; Shah says they order local wines, beers, ciders and spirits more frequently than imported options. And he and New York Distilling Company are also brainstorming a partnership that would forge an even stronger tie to the city. Stay tuned.

Ultra has further differentiated itself by branching into the monthly subscription business. They offer around 80 curated delivery options, including various categories of wine and spirits broken into pricing tiers. “Spirit subscriptions range from $30 moonshine to $200 high-end tequila options,” Shah says. Customers who really want to impress can also order or gift a full bar — ranging from $450 to $14,000 — which comes with two dark spirits, two light spirits, a liqueur, four bottles of wine, a bottle of Champagne and bitters. It can all be shipped to 31 states.

While customer cups runneth over with convenience and personalization, local businesses enjoy added revenue. In NYC especially, adopting any of these new sales opportunities is relatively painless given that most stores already have a delivery service in place.

“What’s not to like? Apps are the future,” says Mark Nani, manager of Casa Oliveira Wines and Liquors, on Seventh Avenue in the West Village. Nani signed up for Drizly at the beginning of 2014, when the site first launched. As expected, sales on the new platform were slow in the beginning, he says, but began picking up last summer. During the holidays, however, things really took off. “We haven’t hit the up-10-percent mark yet, but we’re getting close,” he says.

This is likely because Drizly offers Nani new customers who otherwise wouldn’t hike over to his Christopher Square location — or even know it exists. “We’ve always done delivery, but Manhattan is very territorial,” he says. In the past, someone living north of 14th Street or south of Houston normally wouldn’t call his shop for delivery, opting instead for the closest liquor store, but now Nani fills orders in those areas all the time. He’s had to hire a second delivery man and says the investment is well worth it.

“It’s just easier for people to flip through an app and see what bottles are available and read a little tidbit about them, rather than calling up a store and asking about what kind of this or that is available,” Nani says. “The app’s a lot more user-friendly than calling, and it makes things a lot more efficient for everyone.”

An earlier version of this story appeared in the May-June 2015 issue of Edible Manhattan. The above text includes corrections and updates.