Tapping into Tap: Can Bloomberg Convince New Yorkers To Give Up Bottled Water?

What will it take to wean 8 million New Yorkers off bottled beverages? 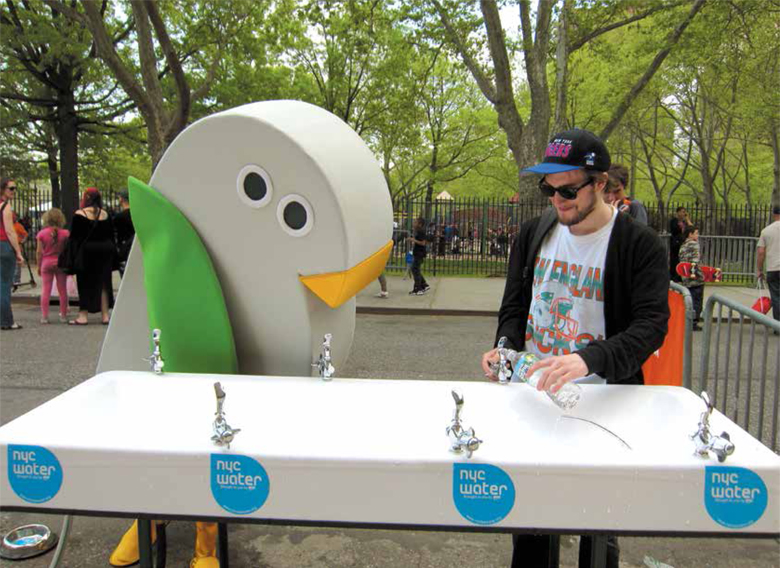 On a sunny Saturday, a jogger in Central Park is suddenly stricken with thirst. Citizen of the Earth that he is, he carries his own reusable water bottle, but he’s already drained it. As he considers buying a bottle at a hot dog cart, a mirage appears in distance: What looks like a giant sink, or maybe a horse trough, beckons him with six flowing faucets. Just as he leans in to fill up his bottle, a six-foot-tall felt bird swoops in, flapping its tree-green wings like a misfit Muppet, to commend him on a job well done.

A bizarre but functional art installation? Nope. It’s just part of the city’s efforts to persuade New Yorkers to stop guzzling bottled beverages and learn to love the tap.

But how do you get eight million New Yorkers to give up the convenience of the ubiquitous disposable bottles? Turns out the city thinks GreeNYC’s feathered mascot, Birdie (Is it a pigeon? Perhaps a great Pampas finch?), might be part of the answer.

“Typically, environmental information in the government space is sort of bogged down in heaviness,” says Roya Kazemi, director of GreeNYC. “Birdie is our mechanism for delivering that message in a clear, direct way. He’s kind of cute and silly but we want to reach all New Yorkers, not just the ‘deep greens.’ ”

In bus shelter ads, for example, Birdie presents a very easy-to-swallow message: “New York City has some of the best tap water in the world,” Birdie cheeps on the poster, while filling a glass. “It travels to us from pristine reservoirs in the Catskill Mountains. Mmmm… .”

There’s no mention of soda-induced obesity or the mountain ranges of plastic bottles poured daily into landfills, but the city aims for “small steps” to achieve “big strides.”

While Birdie hardly flies in your face, the Bloomberg administration hopes he’ll stem the tide of bottles people drain once and toss—which would be fantastic news for both the environment and public health. For starters, Kazemi explains, it takes three times as much water to make a bottle than it will eventually hold. Plus, those plastic bottles are petroleum-based, so their production gobbles up fossil fuels and releases climate-change-inducing greenhouse gases.

Then consider the energy cost of shipping or trucking liquid from distant mountains to bottling plants and then cities. All in, the production, packaging and transporting of a liter of bottled water entails around 1,500 times more energy than treating and delivering the same amount of water from Catskills lakes to your tap.

Despite all this, New Yorkers go through over a billion bottles per year—of which 70 to 80 percent wind up in landfills rather than recycling bins.

Filling up at the tap, on the other hand, is ecologically sound both locally and globally. And while plenty of bottled brands brag about their taste, New York is one of only five American cities awarded a filtration avoidance determination by the EPA, government-speak that means the water is naturally and exceptionally clean. While other cities’ sinks spout something that smells sulphuric or swampy, the water in an East Village walkup calls to mind exactly where it came from: placid mountain lakes upstate.

Tap is the darling of environmentalists, but of health champions, too. Swap in water for 12-ounce, 140-calorie cans of soda—or 20-ounce, 125-calorie bottles of Vitamin Water—and the rates of obesity and diabetes will be watered down, too.

And water isn’t just better for your body than soda and sugary juice. Some proponents even say tap water is better for you than bottled water, because the latter need only clear state standards, while the former must pass higher federal quality requirements.

As for cost, at about a penny per gallon, tap is around 1,000 times less expensive than bottled water.

It’s all thanks to the New York City watershed. “We deliver some of the best drinking water in the country through this marvel of engineering that is our water supply center,” says Chris Gilbride, communications director at New York City’s Department of Environmental Protection, which oversees the city’s water. “Not only is it healthy but it’s also incredibly affordable and better for the environment than bottled water,” he says.

To deter those bottle purchases, NYC’s “water on the go” program attaches portable drinking fountains to fire hydrants, like the one our jogger happened on in Central Park. Last summer—its third year running—30 sites hosted the fountains, including Brooklyn Bridge Park, Yankee Stadium and Union Square.

The goal is not just to sate thirst, but to spread awareness: In 2012, half a million people, 3,000 dogs and one horse quenched their thirst at the fountains, and while citizens sip or fill up reusable bottles, DEP interns—and, yes, Birdie—educate them about why New York’s water is better than anything in a bottle. (Want one of the sink-like sippers at your street fair or concert? Fill out a request on the DEP’s Web site.)

But compared to what’s needed to change habits throughout the five boroughs, these efforts are a drop in the bucket. Both Gilbride and Kazemi acknowledge that the bottle-buying millions won’t suddenly begin carrying reusables after seeing a cartoon bird on a bus ad. What’s needed is a significant shift in thinking—turning bottled water into a stigmatized, outdated habit and celebrating tap as the locally sourced, natural product that it is.

“This effort is ongoing. We don’t expect to just do this for a few months and change such a prevalent behavior,” Kazemi says. “We have the quality water, now we just need to get that message connected to New Yorkers.”

Rachel Nuwer writes for the New York Times, Smithsonian and Science. She consumes countless glasses of tap at her desk every day.