Hudson-Chatham Winery Bet on an Oddball Grape — and Won

Carlo DeVito’s cellar is much more than the chaotically bountiful collection of an out-of-control grape geek. 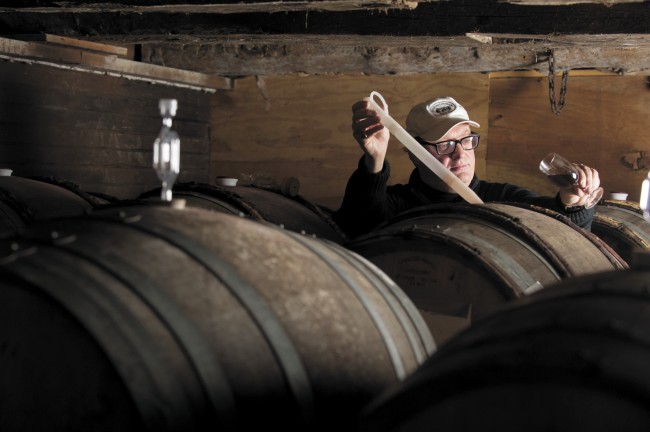 Through the grapevine. This hybrid is rarely taken seriously. But a manhattanite-turned-hudson-valley-vintner has elevated its reputation among the best of the best.

You can tell a lot about a person by the bottles in his basement.

Taking the dozen or so steps down from Carlo DeVito’s kitchen to the cellar below his 1790-built Hudson Valley farmhouse, you’ll find what might be the most diverse wine collection in New York State. Prized bottles of 1982 Mouton Rothschild next to Californian Turley Zinfandel, Virginia-made Norton, a pear wine made in Connecticut and, of course, those of his own Hudson-Chatham Winery.

But DeVito’s cellar is much more than the chaotically bountiful collection of an out-of-control grape geek; it’s a statement — a manifestation of DeVito’s belief that a well-made American wine is due the same respect as any from Bordeaux or Burgundy.

And if it’s baco noir? All the better.

The winemaking world drives the sturdy six-foot-and-change DeVito like a personal nuclear reactor offering boundless energy — something he surely needed when, in 2006, he moved his wife and twin teenage sons from the city to Ghent, New York, and added “winery owner” to his already impressive résumé — as well as a two-hour, each way, commute by train to his publishing day job in Manhattan.

Still, Hudson-Chatham Winery is the realization of a long-held dream, a dream that in 2006 put him on the path to elevating a rarely taken seriously hybrid grape to where it belongs with the best of the best.

DeVito’s baco noir — a hybrid red varietal that rarely shines outside of Hudson Valley tasting rooms — has won the regard of sommeliers up and down the Valley, and here in Manhattan, complete with praise from Forbes and the Times. That’s because Hudson-Chatham’s bacos are different. They’ve been compared with pinots from Burgundy and rustic Rhône blends, even Barolo.

DeVito, however, never set out to blaze the baco trail. Big in the book business, he recently left his day job as vice president and editorial director at Sterling Publishing to found Warren Street Books, where he will continue to cultivate titles in the food and wine realm with A-list wine luminaries like Matt Kramer, Howard Goldberg, Steven Kolpan and Kevin Zraly, plus up-and-comers like Evan Dawson and beer writer Josh Bernstein.

He writes his own books, too — everything from a biography of legendary NFL coach Bill Parcells to the Encyclopedia of Organized Crime. He’s also literally written the book about local wine, East Coast Wineries: A Complete Guide from Maine to Virginia.

Though the first wines he tasted as a youth were made in the basement of his great-grandfather, it was a tiny Garden State winery that sucked him in for life.

“When I was in high school, I would ride my bike from Trenton toward the Jersey shore. I would pass this little winery named the Cream Ridge. And I loved going there,” says DeVito.

By the time DeVito was 18 — the legal drinking age back then — he was buying Cream Ridge wines. By college, he was a red wine lover and always had a mixed case of sparkling under his bed. He was hooked and determined to visit as many wineries as he could. 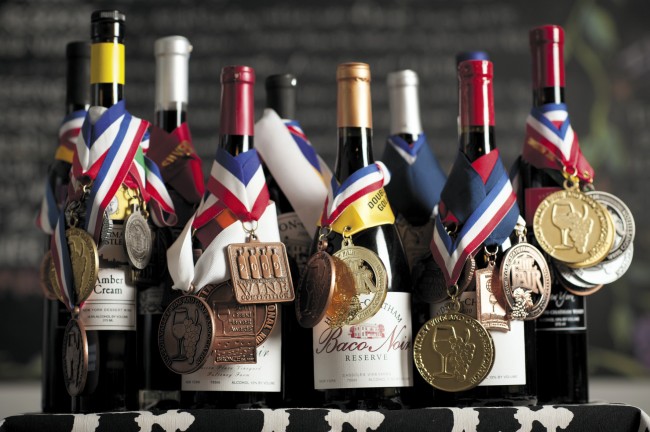 Message in a bottle. Hudson-Chatham’s bacos have been compared to pinots from Burgundy and rustic Italian reds like Barbera.

“I started driving far and wide, and went on trips through Connecticut, and visited Haight, Hopkins and DiGrazia wineries,” he remembers.

By the mid-1980s, DeVito was building a publishing career but wishing to put one foot in the wine world, too. One day in Cape May, everything clicked.

“We pulled into Turdo Winery, a small, five-acre, estate winery. And there was this couple, these beautiful people, who owned this small Italian-style winery,” he remembers of the owners Sal and Sarah Turdo, who were commuting to day jobs in Paramus. “They were our age. They also had two kids, and two dogs. We both thought, ‘See? We can do this.’ And that was it.”

They explored becoming the Turdos’ neighbors in southern New Jersey but were ultimately drawn to the Hudson Valley, purchasing their farm in 2006.

“New York State was making great wine already, way ahead of the other Eastern states,” DeVito says. “We liked the Hudson Valley with its rich farming history, spectacular homes and places to visit, and it was absolutely stunning to drive through.”

The Hudson Valley didn’t — and in many circles still doesn’t — have a great reputation for quality wine. But DeVito believed in its potential.

“What was missing here for a long time were two things: people who knew the history of grape growing here, who had accumulated the knowledge of the weather and the sun and the microclimates. And people who knew the hottest new trends and how to make great wine,” he says. “That’s changed in recent years.”

In 2007, DeVito met winemaker Steve Casscles at a competition for both commercial and homemade wines. Of all the bottles DeVito tasted that day, two of his three favorites were Casscles’s homemade wines.

“I asked him why he didn’t have a winery, and he said, ‘I don’t have enough time for that. It’s too much work. And you can’t make any money.’”

DeVito told him that he was stupid enough to try it anyway and asked Casscles if he wanted to work with him. “Before he’d answer, he said I should come over and taste more of his wines.” DeVito had told his wife, Dominique, that he’d be home no later than 9:30, but what awaited him in Casscles’s cellar demanded more time. He and Casscles sat together and tasted wines that varied in age from 5 to 15 years old, almost all made from baco noir.

“At one point, Steve’s wife, Lilly, in her nightgown and robe, came down and said, ‘Goodnight,’” DeVito recalls, “And I thought to myself, ‘How odd, she goes to bed awfully early.’”

Not long after, the phone rang and Lilly came back down. It was 1 a.m. and Dominique had called the local police looking for DeVito. “Steve and I have been making wine together ever since.”

The Hudson Valley isn’t an easy place to grow grapes, particularly vinifera — classic European grapes like merlot, cabernet sauvignon and chardonnay. It rains a lot; more than in the Finger Lakes and Long Island. It’s warm enough to ripen those varieties, and the rocky soils provide good drainage and potentially expressive wines, but late frosts in the spring — after the growing season has started — and early frosts in the fall — sometimes before the grapes have fully ripened — are common. In fact, DeVito has lost significant percentages of his grapes to frost.

Still, grape growers and winemakers in the region are learning — always learning — as is DeVito. “With a better understanding of the Valley and its weather patterns and tools to fight disease and animals, we’re growing more great fruit than ever before.”

One way to mitigate the growing conditions is to lean heavily on hybrids. This has hurt the region’s reputation in the past, but DeVito and Casscles are proving that not every hybrid is grapey, sweet and clunky. In fact, they are leading the quality-wine revolution in the Hudson Valley with grapes like chelois and baco noir.

Today the Hudson-Chatham portfolio is nearly as diverse as DeVito’s own cellar. There are Bordeaux varieties like merlot, cabernet franc and malbec — typically sourced from Long Island. There are sweet, grapey hybrids that appeal to locals. And there is an impressive lineup of dessert-style wines — from sherry to port — under DeVito’s Paperbirch label.

What is getting the attention of wine geeks, however, is Hudson-Chatham’s single-vineyard baco noirs. A lot of baco is deeply colored and rustically acidic. Others are sweet — perhaps with the goal of taming some of that rusticity.

“I hate those wines,” says DeVito. “They give baco a bad name.”

But, when baco is grown in the right places — like the vineyards DeVito works with — and is treated with care and a light hand in the cellar — the way Casscles does — the results can be ethereal.

It’s not just the critical acclaim or the fact that he’s managed to take a once-lowly hybrid grape variety and get it on the wine lists of places like Blue Ribbon and Rouge Tomate, however.

“When you put it in that big Riedel glass and you get a whiff. And then you drink it with food … and friends and family. That’s everything.”